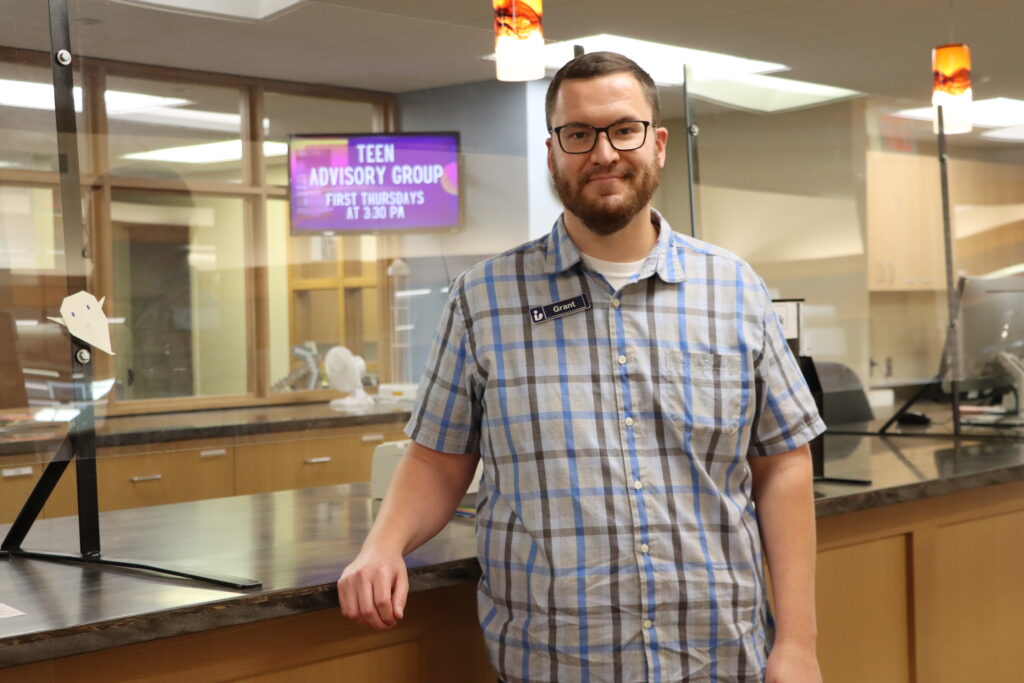 Grant Cook, who has stepped into the position previously filled by retiree Linda Wright, is a quiet guy.

However, he hopes people will not shy away from him because he is quiet. “I’m just better at adapting to a conversation than I am at starting it,” he said.

A 2007 graduate of Waverly-Shellrock High School, Cook, 32, recently moved to Ames from Iowa City. With a family that moved around in Iowa a few times while he was growing up, he said he considers Iowa City his hometown, having lived there longer than he lived anywhere else. He’d lived in Iowa City since 2009.

“My parents are retired and now live in Ames,” Cook said. He was looking for a change this past year, and decided to move in with his parents while he kept an eye on job opportunities. The opportunity at the Nevada Public Library appealed to him.

Cook started his college education at University of Northern Iowa, attending for two years before transferring to the University of Iowa. As an undergraduate, Cook studied studio art with a specialty in printmaking and a minor in communications studies.

During his college years, Cook worked as a student assistant, first at the UNI library, and later at the Coralville and Iowa City public libraries. He found that he enjoyed the library setting, but to move up and/or work full time in the library setting, he needed another degree.

He returned to school and got a graduate degree in library and information sciences.

What is it about library work? “I like the environment. I like reading, and I have a knack for organization and cataloguing,” he said.

The past four-and-a-half years, Cook has been working at the Iowa City Law Library. It was library work, but not always the most interesting. The appeal of the Nevada Library job, which he officially started on Oct. 4, was working in a public library again.

“I like that there’s something new every day. With reference questions, I get to learn many things I don’t know by helping others look things up. I’m also cataloguing books and DVDs that, unlike in the law library, are now things I actually might now a little bit about,” he said.

Cook likes the staff at the Nevada Public Library and he likes that the library is small enough that all staff members get to do a little bit of everything. His job will also include the work of home deliveries, and he’s looking forward to that aspect and getting to know patrons a little better as he visits them.

Asked about his favorite types of books to read, Cook said as he’s gotten older, he’s reading more nonfiction. “I’m a big NBA fan, so I like reading basketball books.” Another book he really enjoyed reading recently is “A Short History of Nearly Everything” by Bill Bryson. “It was a quick catch-up of all your science classes in school. Bryson puts it all in an easy to understand way.”

Cook also enjoys reading about and listening to crime podcasts.

When not at work, Cook’s hobbies and pastimes include watching a lot of pro basketball, walking and hiking, and traveling. Just this spring, he went to The House on the Rock in Wisconsin. “It was interesting architecture and a museum … it was very eccentric,” he said.

“I’m not good at cooking, but I like the idea of cooking,” he added, as another possible pastime.

Cook is also a cat person, who has a 13-year-old tuxedo cat that he rescued named Vern. Vern is very lazy and sleepy, he noted.

When it comes to his work at the Nevada Public Library, Cook said he has a goal to learn as much as he can and to continually help the library improve its services.