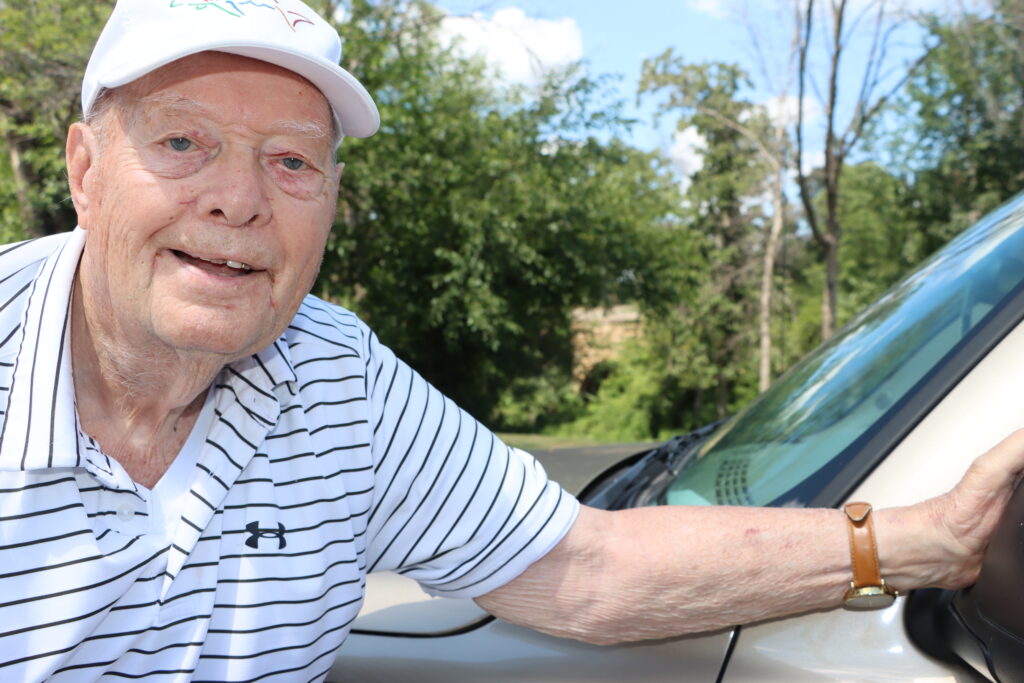 Harold Brinkman leans against his truck in front of the Knoll Ridge property that he and his partners gifted to the City to be used as an Indian Creek Greenbelt Trailhead. Harold has always love the beautiful train bridge on the property. The City still plans to someday make this property a trailhead. Harold Brinkman has watched over progress of Nevada’s trail system for many years. Today (August 23, 2022) he turns 90. Photo by Marlys Barker

The next time you take a walk or ride your bike on the Nevada Indian Creek Greenbelt Trail, we want you to think about Harold Brinkman, or “Brink” as his friends like to call him.

Harold, a 1950 Colo High School graduate who has lived in Nevada for 60 years, is the man behind Nevada’s beautiful trail system.

Turning 90 today (August 23, 2022), Harold, a retired banker who once worked for State Bank & Trust Co., had the vision for a trail along the Indian Creek and thought about, presented, and promoted the idea for years before it became a reality.

“It will be my legacy,” said Harold, as he sat next to his wife, Jan, last week in their Windsor Manor apartment in Nevada. The couple – married for 64 years – moved to the assisted living facility about a year ago after residing in their home in what locals have always called the “new addition” for 59 years. The “new addition,” south of the high school, was developed by Jan’s father, Glen Newton.

Archived issues of the Nevada Journal, starting with a publicized Rotary report in the April 29 issue of 1988, tell the story of Harold’s quest for a trail along Nevada’s Indian Creek.

“Harold Brinkman had the program at Wednesday noon’s meeting of the Nevada Rotary Club,” that Rotary report reads. “He began by showing a number of wildlife scenes (through slides) without saying where they were taken, and asked if anyone could identify the locations.”

Today, Harold still recalls that Rotary meeting. “I invited some prominent people to the club that day.” The newspaper account noted who his guests were: Greg Madsen, Bill Horine, Ted Tostlebe (of the Ames Rotary Club), Jim Potter, Keith Cooper, and Ken Huffaker.

“Only four people in the room got the answer right,” Harold still remembers about showing the photos he’d taken along the Indian Creek. “But the reaction was pretty good to my idea (for a trail), and I got requests to do the slide presentation for other groups.”

Harold’s vision was to have the town’s service clubs and other organizations cooperate on the project.

Harold also had a couple of other reasons for wanting to see a trail happen.

First, he was committed to seeing people enjoy the great outdoors. Harold was an active member of the Story County Conservation Board. Second, Harold, along with Alton Carsrud, Ray McDaniel and Richard Ketcher, had developed the Knoll Ridge Subdivision on the west side of Nevada, and Harold felt that the beautiful “Chicago Northwestern Bridge” at the very back of that neighborhood would make a wonderful “trailhead” property.

Harold Brinkman was offering to give the city the piece of property with that beautiful bridge on it, but he wanted it used as a trailhead.

Today, Harold still talks about giving that land to the City. The gift happened. However, the trailhead he wanted hasn’t happened yet. “I still want to see it happen,” he said last week.

Harold will be happy to know that the Knoll Ridge property with the bridge is still a focal point for City officials. Nevada’s Parks and Recreation Board has consistently identified the trailhead development and trail connection from Knoll Ridge to Lincoln Highway as a priority, and that property is noted in the board’s development plan. The Knoll Ridge bridge property was also a focus of a recent “walkability tour” by City officials, a tour done in coordination with Wellmark Blue Cross and Blue Shield as part of the company’s community health initiative.

In the meantime, Harold encourages residents to take a little time off the trail to go to the back of the Knoll Ridge Subdivision and see the beautiful bridge. Two fun side notes he mentioned about the Knoll Ridge area of Nevada: 1) In the 1970s, elephants were taken off the train there when the circus came to town. “That was a big deal,” he said. 2) Knoll Ridge was named after a favorite golf course of Brink’s – Knoll Ridge Country Club in Cedar Rapids.

GETTING THE TRAIL STARTED

Nevada’s trail development ball really started rolling when Harold presented at that January City Council meeting in 1994. Harold recognized that the Indian Creek Greenbelt suffered severe flooding in 1993, and said it would flood again, although nobody was at fault for that. Still, he felt the creek and greenbelt needed a “planned program.” One of the first tasks was the need to clean up the creek and surrounding timber area.

The City Council was discussing funds totaling $11,327.29, which were received for flood relief efforts, and Councilman Gary Clem said he’d like to see the funds used to begin cleaning up the creek. That motion started clean-up efforts.

The City submitted its first REAP (Resource Enhancement And Protection) grant application in 1995, which initiated phase I of the Indian Creek Greenbelt Trail. Phase I was developed in the area near the Story County Fairgrounds and Meadow Lane. It was completed in 1996.

Through the early 2000s, the City submitted several successful REAP grants to continue adding phases of the trail system, and eventually take it from Lincoln Highway at the west side of town over to SCORE Park on the east side.

Every step along the way, Harold was watching the trail’s progress. He was delighted that after its completion, he and his wife Jan were treated to a golf cart tour of the entire trail.

“I was the one who really pushed (for the trail),” he said. “And it feels good to see people enjoying it now.”

Nevada Parks and Recreation Director Tim Hansen credits Harold Brinkman’s role in the trail development. “It was his vision that started this whole thing, and it was nice to have his insight and input to help us develop the trail we have today.”

A LITTLE MORE ABOUT HAROLD BRINKMAN:

Family members were expected in Nevada this week for Harold’s birthday celebration. Happy Birthday Brink! And, thank you for all you did to make a difference in Nevada!