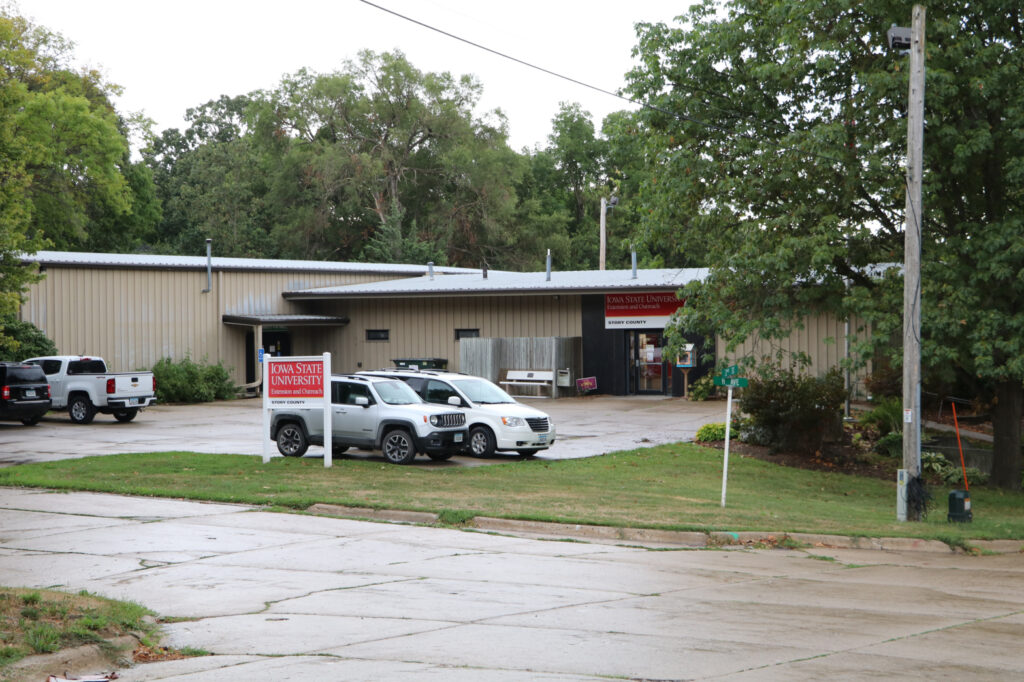 The Story County Extension Office was located at 220 H Avenue in Nevada since 1981. The office has now moved to the east side of Ames. The building in Nevada is available for rent through the Story County Fair Association.

After 40 years at 220 H Avenue in Nevada, the Iowa State University Extension Offices of Story County have moved to Ames’ east side. Some Nevada residents witnessed the move as it took place on March 3, posting photos, comments, and questions to social media.

Current Region 17-Story County Extension Regional Director Eugenia Hartsook has kindly shared information about why the move has happened and reminded that an open house is planned at Extension’s new location, 1421 S. Bell Ave., Suite 107, Ames. The open house is on April 13 from 5:30-7 p.m. She encourages the public to tour the new location at that time.

It may have surprised some to see Extension move, but Hartsook explained that it didn’t happen without careful consideration. It was a process of identifying goals to meet current and future needs, including the location and capacity of facilities, that started in the summer of 2019.

“A subcommittee consisting of staff and (Extension) council members was formed to evaluate our service assessibility to all Story County citizens,” she said.

Understanding where people live was vital to the decision about the office location.

Hartsook shared what they were learning about the county’s population. Of Story County’s approximately 99,117 residents, 77,328 live in the communities on the west side of the county, compared to 11,900 on the east side of I-35.

“The committee considered how the Nevada location influenced current clients,” Hartsook said. While the strengths included familiarity and the convenience of being near the fairgrounds during fair time, there were drawbacks to the Nevada office and its location, and not only because more people live on the west side of Story County.

“The committee also considered the needs of the staff in the Story County Extension Office,” Hartsook said. More space for closed-door offices was needed, especially for providing virtual programs and meeting the state testing requirements. The Nevada office design also limited the ability of regional field specialists to provide services.

According to history written by the late Jim Christy, the Extension office building in Nevada, including Christy Hall, was built in 1981. The Story County Fair Association has been and is the current owner of the building.

Michelle Gibson, manager for the Fair Board, said the Story County Fair Association’s goal is to find someone to lease the building. She noted that Christy Hall is still available to rent for events, meetings, and other gatherings.

Hartsook said Extension still plans to utilize Christy Hall during the Story County Youth Fair, which will remain in Nevada at the Story County Fairgrounds, where it has been happening since 1939.

Going in the right direction

When it comes to programming, Extension’s two biggest goals are to be in a place where it can reach the widest variety of clients and meet the needs of increased program capacity.

“I believe the best tribute (to the Extension service) can be to continue our work with youth to provide the best program in the state,” Hartsook said. She said there had been impressive growth of the Story County program in the last three to four years.

In three years, Hartsook said Region 17 – Story County hopes for a 30 percent increase in foot traffic and online traffic and a 50 percent increase in registration and program participation. The new office location will provide expanded space with private meeting rooms and offices, an outdoor area for youth programming, and enhanced internet connectivity for virtual programming.

Story County Extension provides educational opportunities for all citizens, and Hartsook encourages everyone to learn more about what is offered by receiving Extension’s bi-monthly newsletter. Email xstory@iastate.edu to receive the newsletter electronically.

It’s natural for Nevadans to be sad about having Extension move out of its longtime home in our town. But, the departure may lead to a new opportunity for that space in our community.

Longtime Extension supporter MaryAnn Heintz Gardner of Nevada urges her fellow residents to turn their tears into cheers for what Extension is accomplishing in Story County.

Gardner knew Jim Christy (for whom Christy Hall was named) well and believes he would cheer for the future.

“Jim would be proud to see that the Extension staff is doing such a great job and aiming to serve so many people with larger, more adequate facilities,” she said.

Nevada Mayor Brett Barker wishes Extension well. “Nevada has been fortunate to be home to ISU Extension for many years. We hope that this move will help them to provide more enhanced services for our residents.”