Nevada’s old hotel was, at one point in time, the community’s greatest need 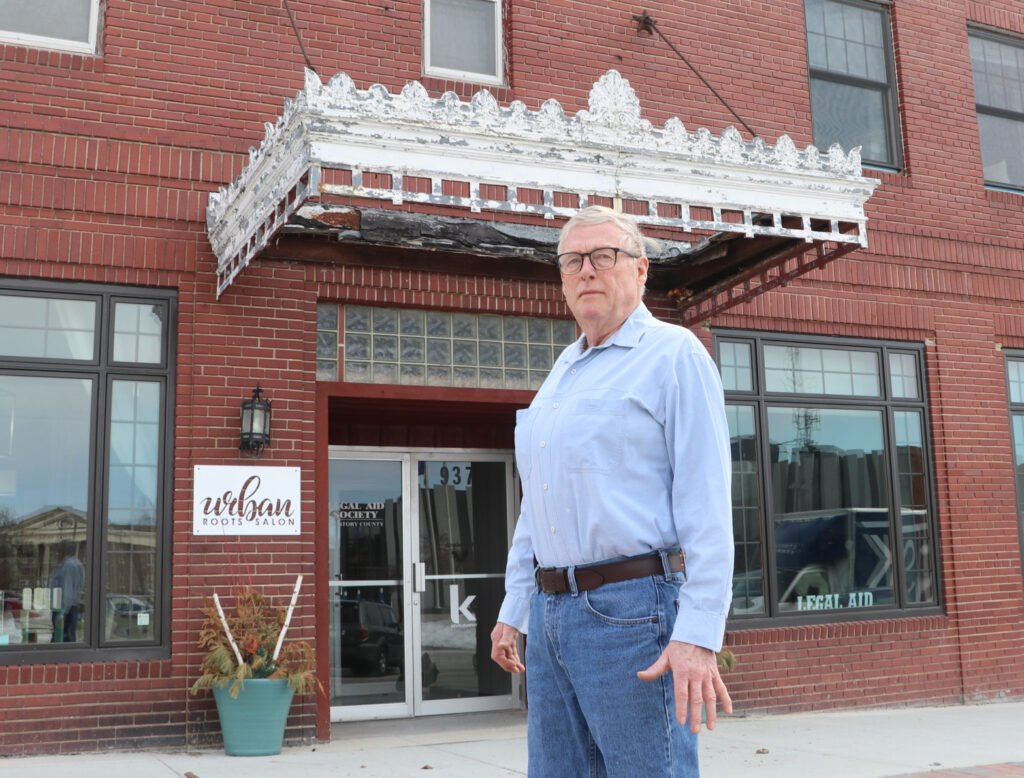 Roger Samson stands in front of the hotel building he has owned for 36 years.

An architectural drawing on the front page of the Monday, May 25, 1925, Nevada Evening Journal showed the “Nevada Community Hotel,” headlined the “Greatest Project City Has Undertaken in Years.”

Three-quarters of that front page concerned the hotel project and the fundraising campaign to make it a reality. A banner headline announced, “$100,100 Hotel Fund Subscribed,” and a section called “tabulated returns” showed the tally of each fundraising “Division” during a weeklong fundraising drive, which assured, “Nevada will build a hotel without a mortgage of any consequence.”

They got things done in that day and time, similarly to the fundraising we’ve seen in modern Nevada times. People and clubs, identified as movers and shakers, took on making calls and asking for financial commitments.

The “New Enterprise Committee” of the Nevada Community Club and the Nevada Rotary Club were listed as significant supporters of the new hotel project. Hockenbury System, Inc., a company with the perfect system of raising funds, was heralded as leading these organizations to success.

Most important about the Nevada Community Hotel was what it meant to the City of Nevada. The Nevada Evening Journal reported, “They (all those involved) were working for ‘Nevada’s greatest need,’ a new modern hotel.”

Under the direction of the Nevada Community Club’s Enterprise Committee, a survey had been taken, the need had been established and the plan for how to finance a hotel was drawn up. “Civic progress in any city is marked by the way it meets the changing conditions and developing needs of the community,” the Journal reported. It had become evident that without a new, modern hotel where business people and salespeople could stay, Nevada would continue to lose economic opportunities to communities with the ability to house overnight guests.

The Nevada Community Hotel, located at the corner of J Avenue and Sixth Street, still stands. And, the hotel has sparked the interest of Nevada residents in recent weeks, as they’ve talked about the historic building on social media.

Nevada Building and Zoning Administrator Shawn Cole said the hotel is one of, if not the best, built historic buildings in Nevada. “It’s an incredible structure; very soundly built,” Cole said.

Present owner, Roger Samson, will turn 73 next month. He has owned what we Nevadans now call “the old hotel” for 36 years.

Owner of his own Samson Plumbing and Heating business for 40 years, Roger said it takes someone like him to keep up with the work that owning such a building demands. “You need someone who knows how to fix things and work with the mechanics of a building.”

The hotel was billed as “fireproof” when it was built. Fire was the common destroyer of many hotels in the early 1900s, so coming up with more safety measures to prevent that was a goal of the time.

Don Nelson had purchased the old hotel in the 1960s. Roger bought it from his wife Vivian Nelson in the mid-1980s. “I remember there were some (people) interested in putting a bank in here at one time, but that fell through,” he said.

The Nelsons had been renting out rooms, of which Roger counted around 37. “Nelson put two rooms together (for each tenant), and they had a little refrigerator under the counter with a two-burner stove. He kept them rented,” Roger said. “When I bought it, most of the renters were older people who’d lived in the apartments for a considerable time.” To help people get up and down from the upper floors, the Nelsons added an elevator to the structure while owning it. Roger said he has a company that provides regular maintenance to the elevator, and it remains in very good working condition.

As he gives a tour of the building, Roger brings forth interesting details, while some items you see offer their own historic story. Take, for instance, a bus stop sign, sitting in a room on the second floor. Roger can tell you exactly where the ticket booth for bus tickets was inside the lobby. “I still remember it being a bus station,” he said.

Roger also remembers a telephone booth was located in the hotel lobby. But he didn’t come into the hotel much as a kid.

He said he only remembers going into the Nevada hotel once as a youth. It was with a friend, probably after school, and they ventured inside to get a candy bar. “The hotel wasn’t really a place for kids,” he noted. He’d never eaten at the hotel restaurant at the back of the main floor, up several steps and located where Story County Legal Aid is now.

A big room in the basement of the hotel was a community gathering hall. “Harold and Jan Brinkman had their reception here when they got married,” Samson said. The room is used for storage now, but you can still see how impressive the windows at the north and south sides of the room would have been in their time. Even as basement windows, they let in a lot of light, and back when the street wasn’t as wide, you could see the sidewalks through grates when looking out the north windows, Roger said.

In the southeast corner of the basement is a room where a laundry shoot comes through the ceiling. “I guess this was where all the guests’ laundry ended up. It must have been the laundry room down here,” Roger said. He also points out where a kitchen was located, complete with a dumbwaiter to transport things from the basement kitchen to the restaurant above.

On the upper floors, Roger is still working to create a few more modern apartments. He has renovated and designed three apartments that are presently occupied. One of those, he said, is 1,000-square-feet and the new windows give the apartments beautiful views. It’s very different from the many little sleeping rooms or tiny two-room apartments that were rented out for many years.

In the northeast corner of the second floor, Roger tells the story of Gladys Luey. “Did you know Mrs. Luey?” he asked. “She owned farm ground here and in Nebraska, and she owned ground in California.” Samson said Gladys had no children and lived for 65 years in her small second-story apartment in the hotel.

Roger said he received a $10,000 grant to help make some improvements, like the new Pella windows.

“It was important because of the old windows’ age and they were single-glass panes,” he said. Of interest – the windows he put in were “stock size.” Putting them in clearly enhanced the beauty of the building both inside and out.

The old hotel currently has five business spaces, with four of them occupied. Roger said he’s had interest in the fifth space, next to Clock Works.

He’s got his workshop in the basement of the building and continues to enjoy tinkering inside the hotel walls as he works to get three more modern apartments constructed.

“There’s a lot of challenges in owning an older building, mostly mechanical,” he said. “But the best part has been restoring it,” he confided. It certainly gives him a well-earned sense of pride.