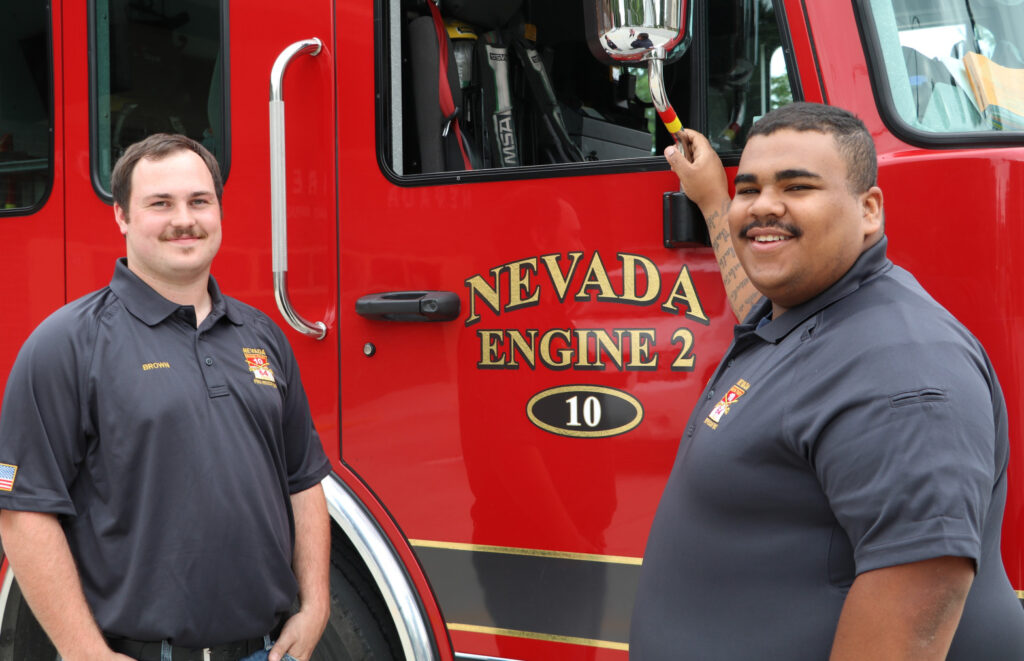 Two fairly recent graduates of Nevada High school have been promoted to the rank of Lieutenant in the Nevada Fire Department, as announced this week by Fire Chief Ray Reynolds.

The new organizational chart is being presented to the fire department’s membership this evening.

“Both members (Arnaud and Brown) performed extremely well in the officer-led assessment center,” said Reynolds. “They have participated in outside training and learned advanced firefighting through Rogue Training Consultants, Fraternal Order of Leatherheads Society and UHP summits,” all designed, Reynolds added, to show that a firefighter isn’t afraid to get in and get the job done.

Reynolds explained how the officer-led assessment center tests candidates to look at fire scenarios and explain the actions they would take. “It puts real pressure on them to show their thought processes and how they would lead a crew,” Reynolds said.

Both young men shared their reaction to the news.

“When I received the call (about the promotion) I was absolutely blown away,” Arnaud said. “The selection pool was filled with strong and knowledgeable candidates.”

Brown said he was happy when he received the call. “I was glad that all my hard work paid off.”

In the Lieutenant position, Brown, an auto body repair technician at Karl’s Chevrolet in Ankeny, will work under “A Group” Captain Noah Reyman. Brown will assume responsibility for special operations involving ladder and hazmat. He will assist Reyman with equipment issues and accountability.

“I’m eager to help get the new members trained to be the next great firefighters of the Nevada Fire Department,” Brown said.

Arnaud, a full-time jailer with the Jasper County Sheriff’s Office, will work under “B Group” Captain David Donnelly and assume responsibility for city and rescue operations. He will assist Donnelly in facility management.

“I’m excited to be a leader; I love to help people,” Arnaud said. “We have a lot of young people who have recently joined the fire department, and now I have the opportunity to help train the next generation of Nevada firefighters.”

Arnaud is challenging himself to not forget how he was trained. “I feel that when I was new to the department, the leadership extended their experience to me and led me to be the person I am today. I want to reflect that training to the younger generation.”

Arnaud said he also wants to continue growing as a firefighter and EMT. “Just because you achieve the rank, doesn’t mean your learning stops,” he said. He’s excited to work with Donnelley, too. “He has been a mentor and one of many major influences in my time with the Nevada Fire Department.”

Reynolds commended three other firefighters who applied for the promotion, and noted each of them is vital to the fire department.

“Sometimes people lead from the hills with a loud thundering voice, others lead merely by being present in the moment,” Reynolds said. “No matter where you fit in, informal leaders are important to the success of our department.”