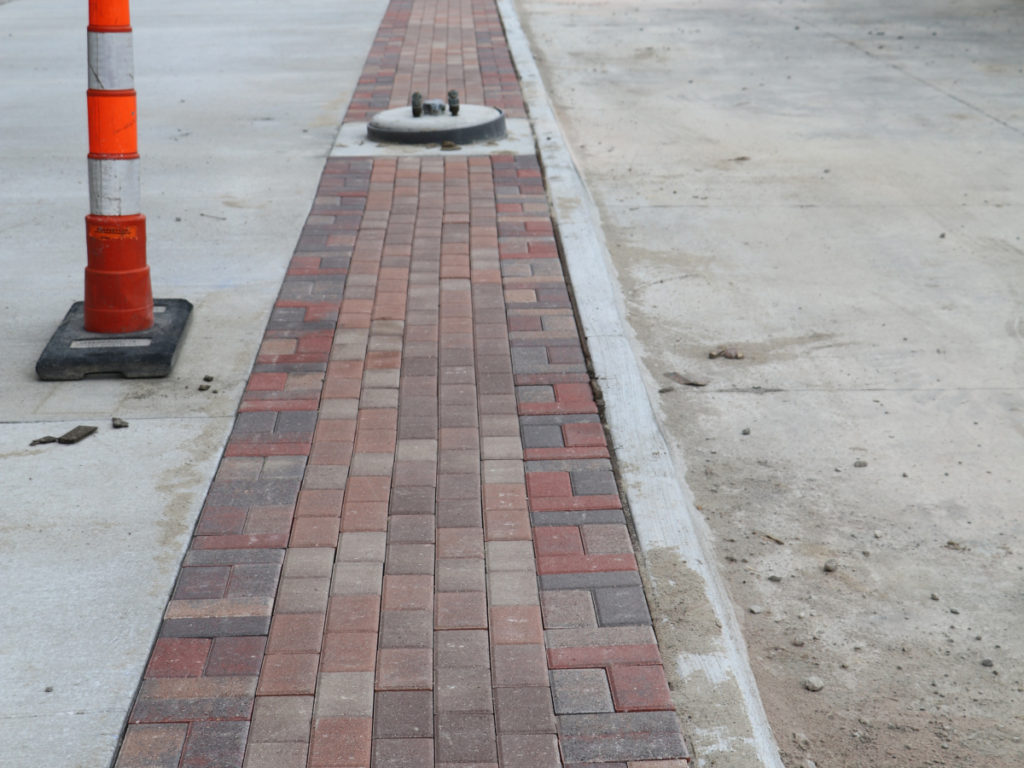 Work that happened this week:

–According to Shawn Cole, Building and Zoning Administrator, workers finished laying the east sidewalk in Block 1 (I to J) this week. They also finished much of the brick inlay work along the main sidewalks (as pictured). The concrete perimeter of the bump-outs is now finished and awaiting the brick inlay work.

–Work on completing service lines in Block 3 (K to Lincolnway) continued this week.

What is ahead next week?

–Bricks will be laid into the bump-outs at the end of Block 1.

–All other sidewalk cutting will be finished in Block 1.

–Cole anticipates the partial opening of Sixth Street in Block 1, up to the northern-most driveway (by the apartment building). He said the other half of that block would remain closed as a mobilization area for workers.

–Work on all service lines in Block 3 is expected to be finished by the end of next week, and Cole said, ConStruct will begin to prep both Block 2 and Block 3 for paving. Depending on weather conditions, Cole anticipates all paving to be complete in early to mid-July.

Other Notes:
–Three water main breaks occurred this week during work in Block 3. None were hit by machinery; they broke because they are old and fragile and often held together by the compaction of the soil around them, Cole explained.

Cole said when they have a break, it does set work back slightly, but it’s all part of the process. From one of the main breaks this past week, because of where water was pooling, they were able to jet the line back to find an old break in a storm line.

“We are using parts of both old and new lines now in the area,” Cole said, “so we need to stop and figure it out,” when a break occurs. “You can’t just let things like that happen and not gain an understanding of why.”

All three main breaks, he said, were fixed easily this week.