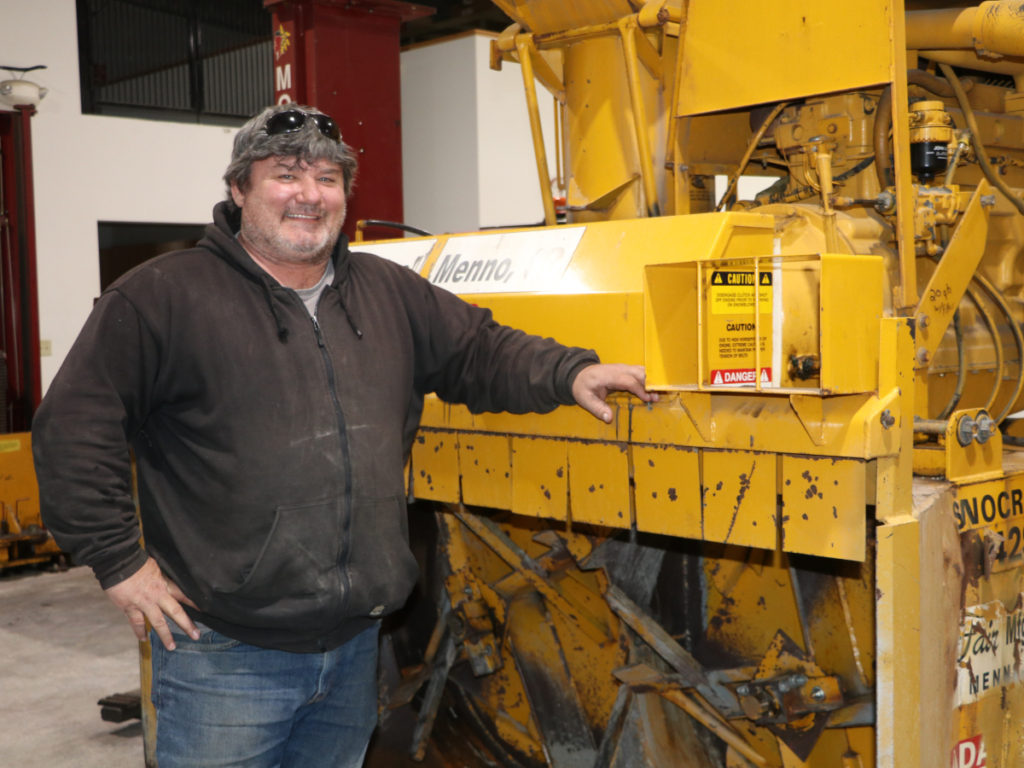 (Note: This is the first of three stories on three Nevada Streets Department employees who celebrate 30 years with the city in 2021.)

When he thinks of the most challenging time during his 30-year career with the City of Nevada, Dave Harrison said it was definitely the floods of 1993.

“I’d started in 1991, so I was still a little green,” said Dave, 53, as he was thinking back. He was hired in 1991, just five days before the city also brought on Dennis Mensing and Mike Ackerman. “I remember a lot of rain and a lot of work. It rained big and never quit. We did a lot of pumping and sandbagging.”

Dave, a 1986 graduate of Nevada, remembers how he moved and kept watch over pumps, “to be sure they were gassed up and stayed running” during that historic year of flooding in Nevada and Iowa. Nothing, including the 2020 Derecho and some pretty massive snowstorms, has compared to the ’93 floods when it comes to big events for a streets department worker, as far as Dave is concerned.

Like many of the Streets Department employees, Dave grew up in Nevada. His youth was filled with fishing at Wilson Pond and Indian Creek, playing little league baseball, and riding his bicycle all around town, until high school when he got his first car, a 1968 red Camaro.

“I liked that Nevada was small and the cops were easy to get along with,” he said with a laugh. He recalled the days of a police force with Officers “Jonesy,” Couser, Fitzgerald, Lilland, Stoeffler and “Smitty.”

Following his high school graduation, Dave worked for his father’s concrete company, Harrison Concrete. In fact, on the side, Dave has continued to do concrete jobs, though lately, he has slowed down a little in taking on extra work. “I was working seven days a week for awhile. I needed a day off now and then.”

His father did a lot of contract work with the City of Nevada, and when the City was looking for Streets Department workers, Dave said his father encouraged him to apply. “He wanted me to get a job with benefits.”

The process for hiring took about a year, Dave recalled. The City had a lot of things going on at the time.

He was eventually offered a job and came in as a level 1 worker with the department. Over the years, he worked up to level 3 by completing training requirements.

Overall, he’s liked his job. “It’s a lot of variety at work. People don’t see some of the things we do, like working with the sewers underground that we have to fix and maintain. It’s a lot of storm and sanitary lines work. There’s also road painting, sign work, tree trimming… there’s a little bit of everything,” he said.

He laughs when asked his favorite thing about the job. “Eating! We eat a lot; we get a lot of treats.” The break room is sometimes filled with treats from residents who are thankful for the streets department’s help, whether in clearing snow or helping pick up after storms. The workers don’t complain, especially Dave.

The most challenging part of the job, Dave said, is the long hours they sometimes need to put in. Those long shifts of dealing with a broken water main or a snowstorm can interrupt normal sleep. Dave leans forward again with a smile and points to his face. “If Dave doesn’t get his beauty rest, this is what happens,” he joked.

Dave has a teenage daughter, Alizaya, who keeps him on his toes. He hasn’t had a lot of spare time for hobbies but said he looks forward to a time when he can do more traveling. “I have a friend in the Philippines I’d like to visit, and some day I’d like to go to Cancun.”

For a while yet, Dave’s experience in the streets department will be a positive for the City. He doesn’t look to retire yet. “I’ve got at least five more years,” he said.

Current Director of Public Works Jeremy Rydl said the department benefits from the knowledge of Dave, Mike, and Dennis. “There’s a lot of experience that comes with these three employees, and that greatly helps our department,” Rydl said.

For Dave, there’s a lot to enjoy about the job, especially the people he works with. “There’s a lot of joking here, but it’s all good-natured, and I enjoy the guys we work with in the other City departments. I’ve made some lasting friendships.”