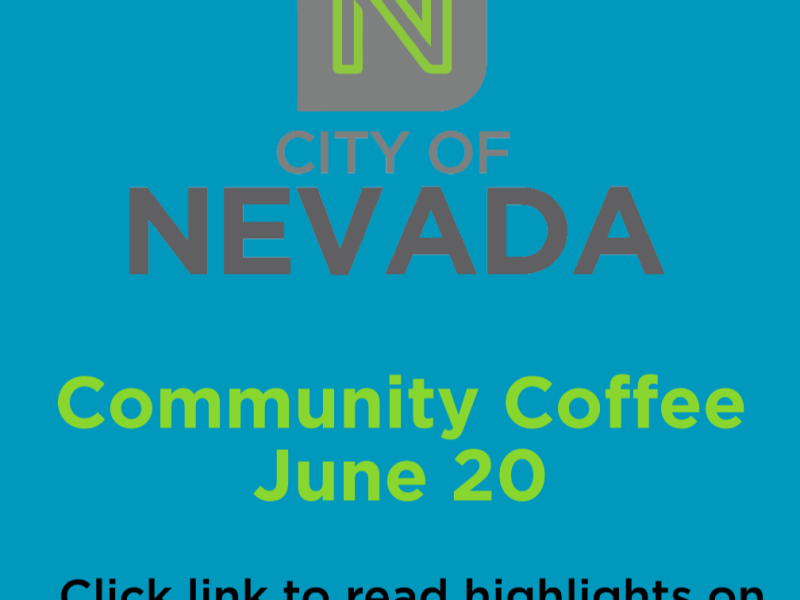 This week’s Community Coffee featured an informative discussion between the Mayor and several members of the Nevada Public Safety Department.

If you want to know more about how our police officers are engaging with the community and confronting difficult issues, you will want to watch the entire video discussion, found here:

–Sgt. Chris Brandes said the department emphasizes that its officers get out and talk to people as part of their training.

–Nevada officers are trained in interviewing techniques and utilize a “soft room” for many interviews with suspects and victims. If you don’t know what a “soft room” is, listen to the discussion.

–Public Safety Director Ric Martinez mandated his officers watch video from the fatal call in Minneapolis and talk about it and the current national climate. Officers also listened and learned from the experiences of the department’s minority officers.

–Officer Ryan Hutton weighed in on being part of the community. “It goes back to community policing,” he shared. “A lot of issues can be solved before they become bigger issues.” He said that having a personal relationship with people helps, “when they can see past the uniform and see the person. It’s always important for me to have people look at me and see my face rather than seeing the badge or looking at the gun.”

–Hutton mentioned getting involved in the community, like working with Rhonda Maier, of Nevada Parks and Rec, on the outdoor movie event this year. He said the two are working again and hope to do another movie event, as well as a BIKE RACE for kids. Watch for more information on those possibilities!

–Officers talked about body cameras and their importance in protecting the public as well as the officers.

–There was a lengthy discussion about racism and profiling. The Nevada Public Safety Department takes these issues very seriously. Chief Martinez said the department talks about “how policing has to be fair and equitable for everyone.”

–Fire Chief and police officer Ray Reynolds remarked that “a majority of police officers are white, are male, are conservative … and that’s not a reflection of the world, so you have to educate yourself.” Officers are encouraged to read, watch videos, and do whatever they can to educate themselves about racism.

–Hutton said the Nevada PD is a diverse department, with officers of various backgrounds. “We are always learning from each other. ” He applauds the department when it comes to accountability. “I believe if I make a mistake, I will be held accountable… We’re not ones to hide or not confront issues at the forefront.”

–The Public Safety Model that is employed in Nevada was discussed. Go toward the end of the video to hear more about how this works in Nevada.

–Brandes ended by thanking the public for their response to the local department during the tough time of COVID and protests. “We really appreciate all the support we’re getting.”