Nevada youth becomes ‘one of the crew’ during downtown construction 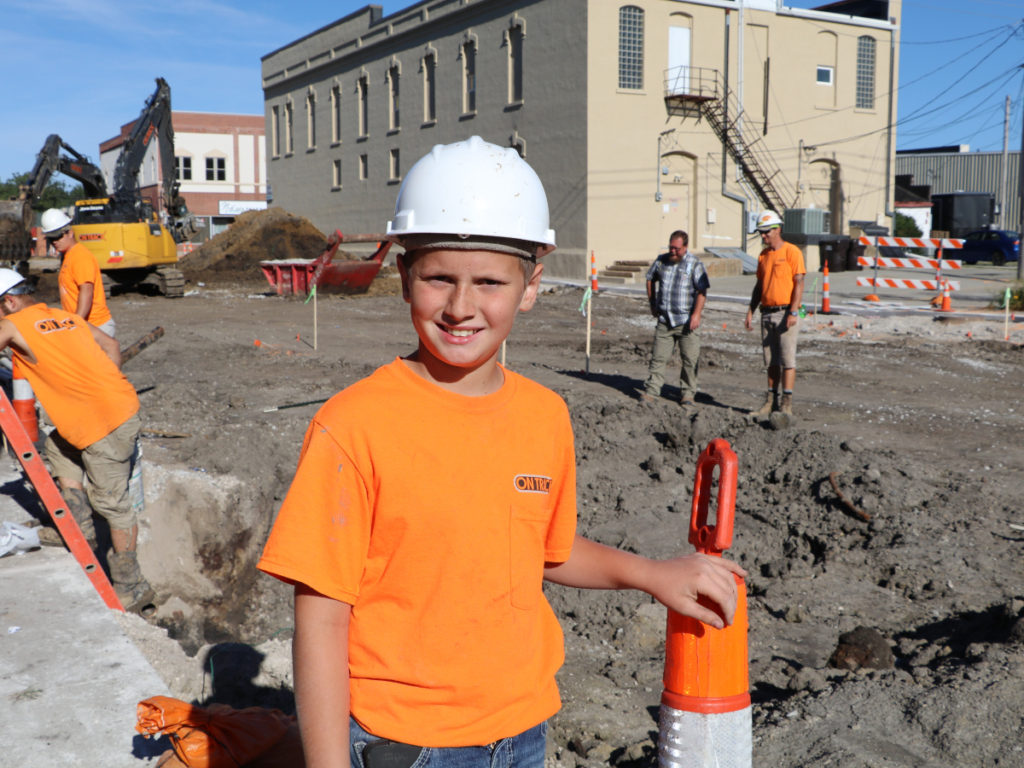 Jayden Schmalzried, 11, has been on the scene nearly every day watching the OnTrack Construction crew do underground utility work.

“I was asking questions, and they’d tell me what they were doing,” said Jayden, about how he started a relationship with these guys he now knows on a first-name basis. “There’s Matt; he’s the boss of the crew. And then there’s Nick, Aaron, Ted, and Dave,” he said, looking out as they worked along J Avenue east of Sixth Street Tuesday morning.

Jayden will head to fifth grade at Nevada Middle School on Monday, and the start of school will bring an end to his week-day routine of following the OnTrack Construction crew for what has been a longer-than-normal break from school. Most interesting to him, he said, is “when they bore. It’s hard work, but you can learn a lot about it” by watching.

One thing Jayden said he’s learned is this kind of work “takes time and practice. They dig, and then they bore the pipes in,” he said. “Yesterday, some of the pipes melted because there wasn’t water, so they had to redo some of it.”

Jayden’s learned that construction work can include its share of “redoing.” And, “sometimes they get it on the first try,” he noted.

Last week, it was suggested by one of the workers that they make Jayden’s presence official. Matt Runge, owner of OnTrack, presented Jayden with an orange OnTrack Construction shirt and a hard hat. “I’ve been here enough; they thought they might as well give me one,” he said of the standard construction outfit he now proudly wears as he watches from the sidewalk.

City of Nevada Building and Zoning Official Shawn Cole said Jayden’s attention to safety has made it possible for him to watch every day. “His best asset is that he stays safe. That’s number-one for everybody from the foreman on down. Jayden’s done a very good job of staying safe.”

Cole thinks it’s great that the construction has been of interest to a youth who otherwise wouldn’t have had much to do this summer. Crew foreman, Matt Warrick, agrees.

“To be honest, it’s kind of nice to see he’s not inside playing video games and that he’s interested in what’s going on in the world,” Warrick said.

Jayden and his little brother, Braxton, stay with their grandma, Rhonda Melton, during the week, and her house is pretty close to the downtown. Jayden’s parents are Ashley and DJ Schmalzried.

When asked if he’d like to work in construction someday, Jayden said he thinks he might. PE is his favorite subject in school, he admitted, but he may now give math a lot more attention. He’s seen how math works in construction. “They do a lot of counting with their work,” he said.

Foreman Warrick echoed that thought. “Math’s a big part of it. We do a lot with numbers out here. They tell us where we need to be with putting our pipes in the ground.”

With the many challenges that are part of any construction project, especially one as big as the Nevada downtown project, Cole said it’s been great to see this young man benefit from it.

“I just think it’s great to see a kid his age being excited to follow this project day in and day out. He’s gained a relationship with the workers and education, too. When the project is completed, many of us will appreciate the new streets and how it looks above ground. This young man can look back and also appreciate all the work that went on below ground.”

What’s the one thing Jayden will remember as being the most fun when watching the work all summer? “Well, when they were working on Sixth Street, sometimes water would shoot out, and they’d get drenched. And we’d all laugh. That was really funny.”