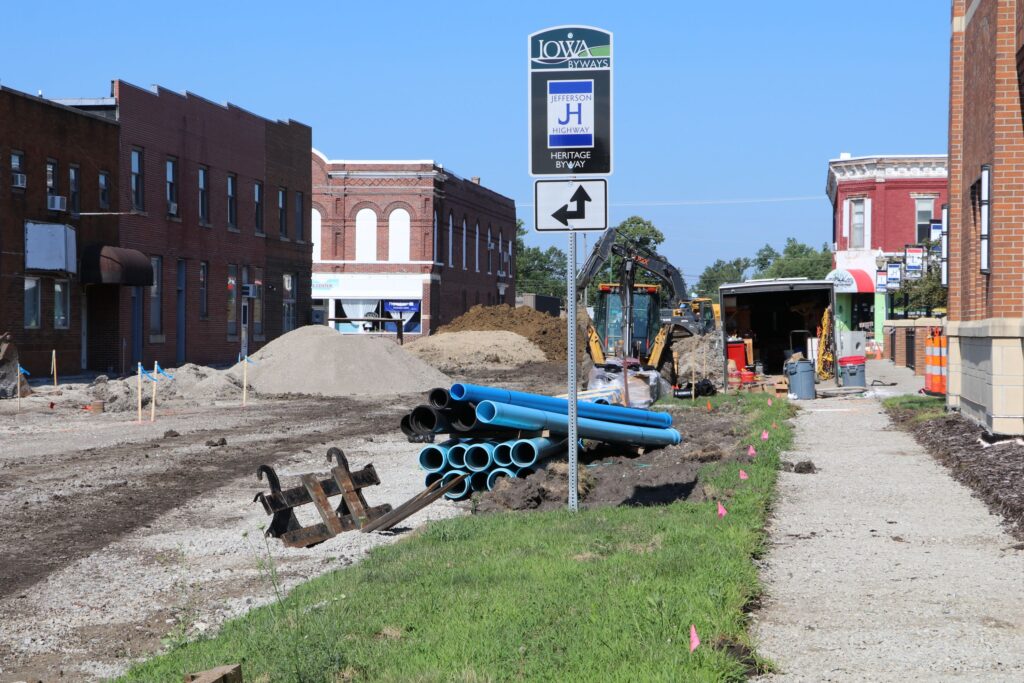 K Avenue, between 6th and 5th streets, is closed today as painting/striping work begins this week.

“Initially, I thought we could take three days and complete all of K Avenue’s painting, but it will probably take most of this week to get everything painted and striped for K Avenue on both sides of Sixth Street,” said Corey Merrigan, Downtown Construction Project manager with Construct, Inc.

Merrigan said by Monday or Tuesday next week, he has “high hopes” to have all of K Avenue from 5th Street to 7th Street open. This will greatly enhance the ability for parking in the downtown area.

Rainy weather – obviously much needed for crops – has caused construction delays over the past week. But Merrigan is still pleased with the quality of work being done.

The alley behind State Bank and other businesses in that block is mostly finished, Merrigan said. It’s only still unfinished close to K Avenue where a Windstream vault needs work before concrete can be put down, he said.

The alley behind the library and businesses from Thisday Photography to Hair Studio has more work happening this week. Getting the concrete down on this alley, Merrigan said, is dependent on the number of concrete crew members available.

“I have high hopes for the south end of that alley to be poured this week, but we can only go so far. On Track still has utility work to complete in the north one-third of that alley,” Merrigan said.

Along Lincoln Highway between 5th and 7th streets, underground utility work will continue this week. Work has been mostly happening in the intersection area so far, but will start to progress toward 5th Street this week.

Merrigan said his best estimate on when the entire block of Sixth Street between Lincoln Highway and M Avenue will be torn up is about three to four weeks from now. At that point in time, the City will provide an entrance to the parking lot for City Hall and the Senior Center off of M Avenue, east of 6th Street.

–Written by Marlys Barker/City of Nevada