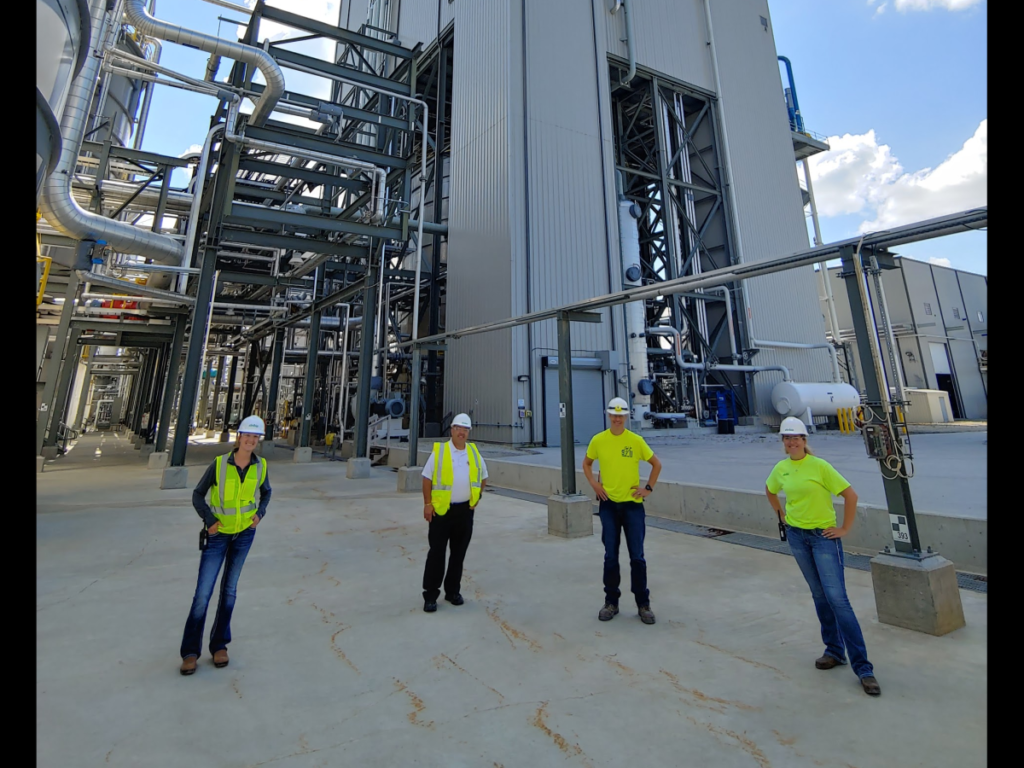 In September 2019, an event paying tribute to the more than 300 firefighters lost in the 2001 tragedy, was born.

Right here, at the west edge of Nevada, VERBIO and the Nevada Fire Department partnered to introduce “CLIMB for 9/11.”

It started from a conversation Nevada Fire Chief Ray Reynolds was having with VERBIO Plant Administrator Kathlyn Long. The two were planning a “meet and greet” social event so local firefighters could get to know the personnel and layout of the new VERBIO biorefinery.

Ray had climbed the VERBIO tower once and mentioned that he’d like to try it again, and in talking, the two realized VERBIO’s tower presented an opportunity.

CLIMB for 9/11 was born, as the first-ever event was scheduled for VERBIO’s 230-foot tower.

Like last year, the Nevada Fire Department and VERBIO are inviting firefighters from around the area to join them this Sept. 11 (a Friday).

VERBIO is still in its construction phase, which allows them to host the event in much the same way they did last year. They hope, even as more employees come on board as production starts in the coming year, to continue to find a safe way to host this event each Sept. 11.

“We plan to evaluate operations annually, and if we can safely host this event, we will continue partnering with Nevada’s Fire Department,” Long said.

VERBIO takes pride in hosting this meaningful event. It’s a way, according to VERBIO’s President and General Manager Greg Faith, to “extend gratitude to our local first responders, while we pay tribute to those who sacrificed and braved adversity on Sept. 11, 2001. We are so fortunate to have Nevada’s Fire Department as a remarkable partner. They truly helped make last year’s event a success.”

“To me, it’s more than just a climb,” said Reynolds, who remembers exactly where he was and how hard the news hit him on 9/11, 2001. “I can’t say I knew somebody who died that day, but I know a number of firefighters who died of cancer since then.” Cancer was the eventual outcome for many responders who survived the event, he said.

Last year, Glen Lawres of Des Moines, who lost 20 members of his family – all firefighters — on Sept. 11, 2001, came to the CLIMB for 9/11 at VERBIO in Nevada. A Bondurant firefighter, Tony Collins, who’d heard that Lawres had asked their department to fly his cousin’s New York casket flag at their location, had another idea. Collins wanted to carry that flag during the CLIMB for 9/11 event. His goal was to take it up and down those stairs all six times in honor of those firefighters.

After two trips up and down, he did have it in him to go up again. That’s when several other area firefighters answered the call and made sure the flag went up and down the stairs six times. It was a significant journey for Lawres and the firefighters who made it all happen.

This year, Reynolds expects more emotional moments as the second annual event happens. “The day we forget 9-11 is the day the world stops,” Reynolds said. “We should always remember it.”

VERBIO officials note that because of the current pandemic, they are modifying some routines so the event aligns with CDC guidelines. “Our priority is to ensure the safety of participants, our employees, and support staff.”

Last year, participants went up and down in the same stairwell during the event. This year, they will go up one stairwell and cross over to come down another to create more distancing between participants.

Any firefighter, first responder who would like to take part in this year’s CLIMB for 9/11, which will start at 4:45 p.m. on Friday, Sept. 11, is asked to contact Reynolds by email: rreynolds@cityofnevadaiowa.org. Members of the military are also welcome to take part.