A Where Are They Wednesday with Craig Handeland 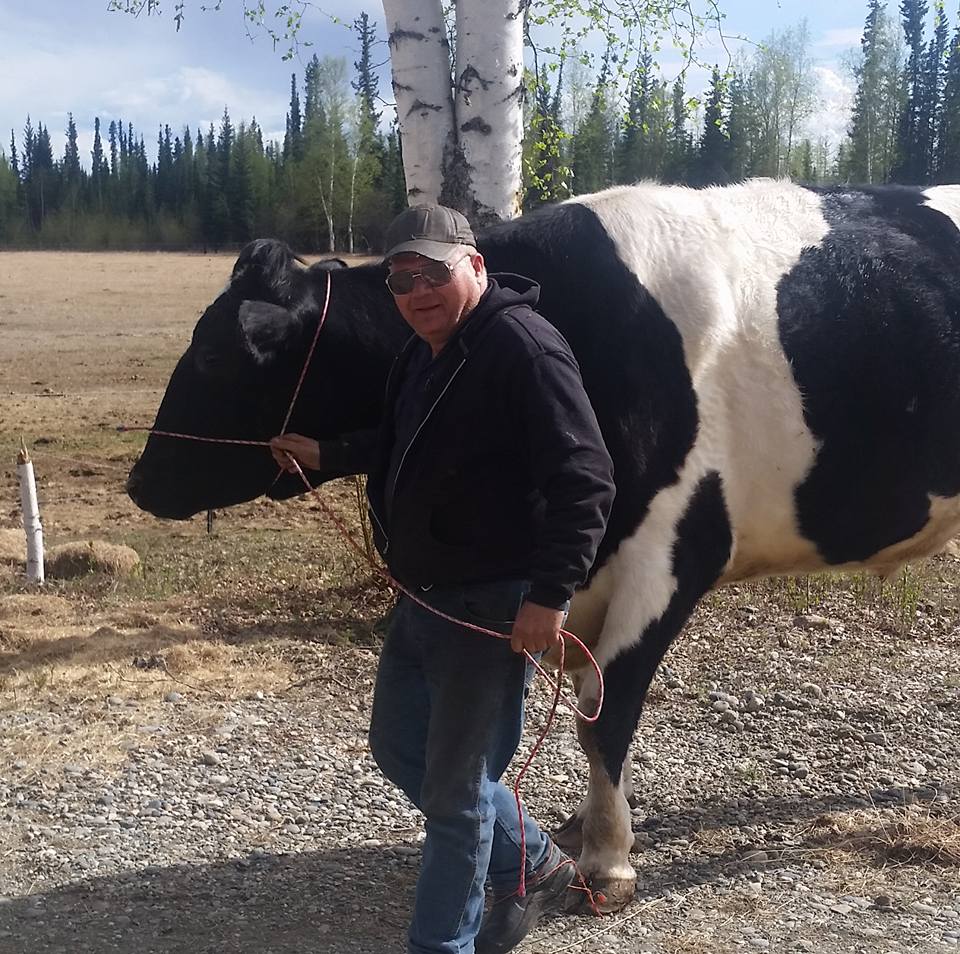 Craig Handeland is shown with his best buddy, Spot, given to him to look after by a neighbor. Handeland said Spot, no longer living, was massive, and they’d often go for walks together in the great Alaskan outdoors.

Unless you graduated with him in 1979 or worked with him at Ryerson Implement Company in the late ’70s or early ’80s, you may not readily remember Craig Handeland.

“I didn’t play sports or anything like that. I was a farm kid,” said the 60-year-old Nevada High School graduate, who now lives in and loves Alaska.

Handeland has been in Fairbanks for 26 years. For the past 13 years, he’s been working as a medevac (air ambulance) pilot. “I enjoy the job, enjoy the plane, and enjoy flying around Alaska,” he said.

Being a medevac pilot in Alaska is much more challenging than other pilot jobs, and he’s had a few. “With this you’re always thinking about how much fuel you have, and we go all over Alaska and fly to Seattle a lot.”

His Path to Alaska

Handeland was born in Ames and grew up on a farm northwest of Nevada. His parents were Gary and Audrey Handeland, and he had two sisters. Both his sisters and his mother still live in Story County.

Of high school, Handeland said, “for me it was just something that interrupted my tractor driving. I loved being on a tractor.”

That’s not to say he doesn’t appreciate what the Nevada Schools did to educate him. “There were lots of great teachers along the way… I took lots of shop classes and did what it took to get through it,” he said.

The local person who most significantly influenced his life, he said, was Dale Jarboe, the shop foreman at Ryerson Implement Company, where Craig worked as a high school student and after high school.

“[Dale] was smart, and he was patient, and no matter how many phone calls he had waiting on him, you never saw him get upset. The guy was just incredible. He could balance many different hoops in the air.”

Along with Dale’s influence, Craig recalled the importance of working at Ryerson’s. After high school, he took heavy equipment program classes at DMACC, but it was at Ryerson’s where he got real schooling.

“I can’t begin to tell you how important working at Ryerson’s was. On day one, do you think I knew what was inside a combine; how they worked? I had no idea,” he said. But before long, he was getting hands-on experience tearing into farm machinery. “Everything I needed to know, I learned at Ryerson’s.”

As much as he loved driving tractors and working at the implement, something else had interested him as a youth — flying.

He’d gone with family members to Canada on fishing trips, and “that was the first place I’d ever gotten to ride in an airplane,” he said. He took his first flight as a kid in 1966.

“I knew a couple guys around Nevada who’d gotten into flying, but I didn’t know what you had to know to fly.”

So, he visited Hap’s Air Service in Ames, and started with a simple discovery flight. The next thing he did was walk into State Bank & Trust in Nevada to borrow “a couple thousand dollars” and get a pilot’s license from Hap’s.

“I had a cool flight instructor, Cliff Henry,” Craig said. “He was patient, quiet, understanding… He’d answer your questions.”

In 1985, Craig quit his job at Ryerson’s and headed to Webster City to a flight school, where he got all the pilot ratings needed to make it a career.

“I moved around and got lots of flying jobs. I lived in a number of places, Minneapolis, Houston, Wisconsin, Pennsylvania…,” but Alaska was always on his mind.

“I had this cool flying job on the East Coast, but somewhere back in time, I’d known somebody who lived in Alaska, and that got me thinking about it. I knew people who’d talked about [moving to Alaska]. I didn’t want to be a talker, so we moved there.”

He had a wife and daughter at the time. Eventually, a son and another daughter were born in Alaska.

“Raising kids in Alaska is really no different than anyplace else. It’s whatever you want to make it,” Craig said. He then added how special it is to grow up or live in Alaska in the wintertime. “When the ground freezes up you can go anywhere in a snow machine. They don’t call them snowmobiles here; they call them machines.”

Craig makes it back to Nevada, Iowa, on occasion. “I try to come back every five years for class reunions, but I really need to come back more than that to visit family,” he said.

Two years ago, he enjoyed his 40th class reunion. “They did a fantastic job of organizing it,” he noted.

When he comes back, the one thing he has to have is George’s Pizza. “I still know their phone number, and I haven’t lived there for 40-some years. But a large George’s sausage pizza, I live for them,” he said, adding that he also has fond memories of Bill and Sharyl George and their family.

He feels grateful to have grown up in Nevada, and for more reasons than just the pizza.

“I grew up back when farming was farming. All my grandparents and great-grandparents raised their kids on farms. But if I wanted to go back to a farm and drive a tractor today, who would I ask?,” he commented. He noted that family farms are a rarity now, and tractors today practically drive themselves.

But great workers are born in places like Nevada, Iowa, he confirmed. “Looking back, people and their work ethic” is top-notch in his hometown. “I hired a lot of people from the Midwest in my airline companies. Usually you don’t go wrong if you hire somebody from a place like Nevada, Iowa.”

Alaska is home now, and Craig said he’ll spend the rest of his days there, and he’ll be piloting the medevac as long as he’s physically able.

When he’s not working, Craig lives according to his motto: “Drive junk, have toys.”

He’s enjoyed riding a Honda Gold Wing, purchased in Iowa, all the way back to Alaska. “I’ve put 40,000 miles on it in a few years,” he said.

He has a four-wheeler ATV that he loves riding in the mountains. He converted an old school bus to an RV and has a boat he loves.

“I love traveling all around this state. I love the lifestyle in Alaska,” he said. “The longer you’re away from the Lower 48, the less you care about it.”

He knows that might sound rude to people back home, but it’s truth for him. He’s living his dream. “Why would I ever want to leave. I’ve got everything I need.” Everything but George’s Pizza!