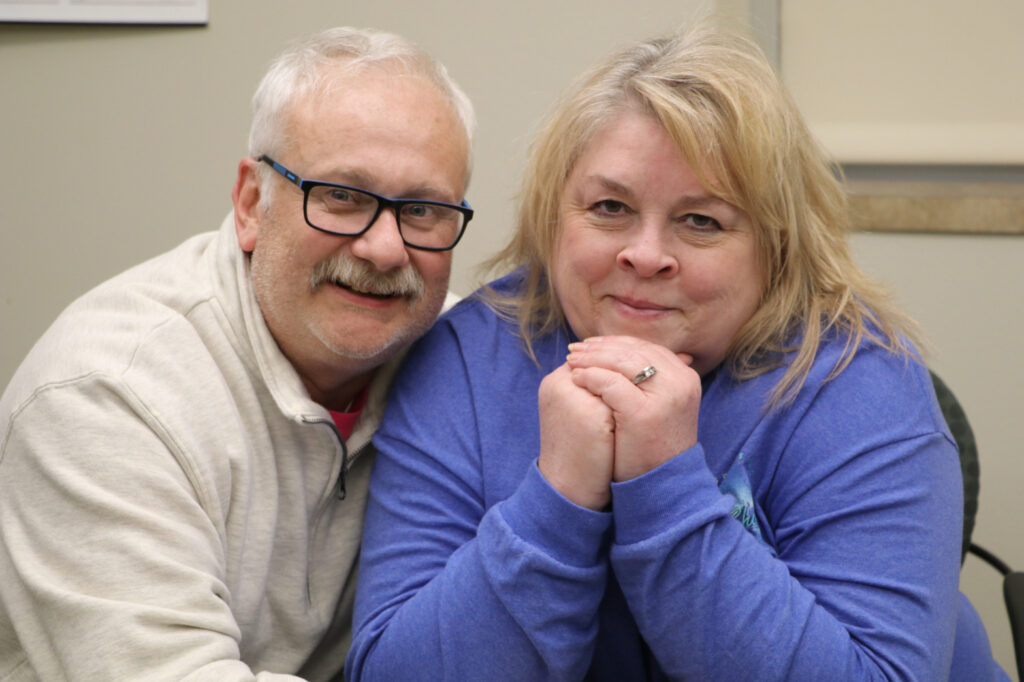 The Nevada Fire Department said farewell recently to a Nevada couple, who between them gave the department 48 years of service and served under four Nevada fire chiefs.

Dean and Tracy Tope, who joined the department in 1995 and 1999, decided it is time to end their volunteer fire careers.

“To be honest, I don’t have the same passion for it as I did when I was in my early 30s,” Dean said. He noted he’s also at the age, 57, wherewith a full-time job (at Ames Computer Forms) and a part-time job (as an EMS on the Story Medical ambulance crew), he needs his free time. He now wants his free time committed to his wife and their daughter, Calyn, who lives in Nevada and works as a CMA for ISU Student Health.

Sitting next to her husband, Tracy nods in agreement and adds another reason why she needs to retire now. “I get tired faster, and I can’t stand in the cold like I used to.”

Even though it’s difficult to cut ties, the Topes walk away from the department feeling fulfilled.

Dean achieved the rank of Assistant Chief with EMS and Fire, but most recently was Assistant Chief for EMS. Tracy achieved the EMS Captain rank. Both say they will miss the “family” connectedness of the department’s members and the many rewards that came from serving their community.

All the cookouts and get-togethers, and the bonding from shared experiences, none of it will be forgotten, they say.

One of Dean’s favorite memories of his time was taking a week of vacation from his real job each year to help with the department’s Fire Prevention Week education in the local schools.

“I just really enjoyed it,” he said. “For one week every year I had Rockstar status!” Kevin Bell was usually his Smoky the Bear, but Tracy told, if Kevin wasn’t available, Dean would dress up as Smoky and she’d accompany him. In 2004, Dean was recognized by Iowa Governor Tom Vilsack for his work with elementary children on fire safety education.

For Tracy, who served on the department’s EMS side, one of her proudest moments was being part of a community-wide smoke detector campaign several years back.

“The group I led was out at Country Club Estates,” Tracy said, “and we went to some of the trailers that had been in the park the longest. One trailer had six or seven kids living there and no detectors. Being able to put smoke detectors in that house… it was one of the coolest things I’ve ever gotten to do.” She was even interviewed by Channel 13 news.

“To belong to and be part of a department that was doing such great things, that’s huge,” she said.

For both Dean and Tracy, a time that stands out during their service was when Dean was diagnosed with appendicular colon cancer.

In 2014 Dean was undergoing treatment and couldn’t work. Their fire family, their work family, and the greater community supported them through it.

“We wouldn’t have our house today,” Dean said, “if it weren’t for the Nevada Fire Department, and Chief Reynolds, Joe Mousel and Jeff Larson, who spread the word and threw us a benefit.”

The Topes say they will never forget the help they received.

he rest is history,” he said.

Dean went to DMACC for commercial arts; Tracy went to beauty school in Des Moines. After marrying in 1985, they made their home in Nevada.

It’s because of friends that Dean joined the Nevada Fire Department, he recalled. One of those friends was Mike Davenport. “He started talking about how he was on the fire department here in Nevada.” Eventually, Dean started attending Wednesday night training meetings and getting to know the other members. Then, during a July 4 get-together at the Topes, where Dean, who was always lighting burn piles and bonfires, caught himself on fire and stayed calm, his friends thought it was time he joined.

“He didn’t react, didn’t freak out, and that was when Mike said, ‘You’re christened,’” Tracy recalled, adding that other than burning some facial hair, he came out of it pretty unscathed due to fast action of tamping the fire out.

It was a few years later, when Tracy was with Dean and the firefighters at the fairgrounds, as they were showing off a new engine, 310, to the public that an emergency happened, and Tracy got involved. “There was a medical call at one of the food booths,” Tracy said. “So Dean and I, both first-aid/CPR trained, ran over to try to help. I was able to direct Fred Malven (of the fire department) into the scene and from there I started directing traffic.”

After that, Tracy recalled, Fred wanted to talk to her about coming onboard. “He asked me to join the fire department as a first responder, so Dean and I and several others took the class to be EMT-B certified,” she said.

Even though she was part of the EMT crew, Tracy learned other things too. “I had to learn how to drive a tanker truck,” she said, in case it was needed at a call, and no one else could get it there.

The hardest thing with both of them being on the fire department was having a young child at home. But their neighbors, the Pratts, were always there to help Calyn if both of them were needed

Life as members of the fire department has the beauty of camaraderie and the sorrow of seeing people at their worst and seeing unthinkable tragedies. Dean compartmentalized the tragedies better than Tracy, who would often end up breaking down after a call, especially if she knew someone, which was common for a girl who grew up in Nevada.

Both Dean and Tracy still recall the Opperman house fire and the loss of a mother and her two children as one of the worst days of their firefighting career. Tracy still tears up at the mention of it.

Comments from the Chief and sound advice

Chief Ray Reynolds shared the following remarks about the careers of Dean and Tracy in the department.

“Dean was always so involved in fire prevention and helping the association during the school’s scholarship presentations. He brought a certain levity to the environment. It is hard to not miss a person who leaves after 26 years,” said Reynolds.

“Tracy took the rehab program and formalized the group to be members of the department. Tracy taught the rehab tech class at the CITA fire school in Cedar Rapids (and at other fire schools). Tracy is always involved in the fire department fundraising activities,” Reynolds said.

When asked about the advice they’d give to anyone thinking today about getting on the Nevada Volunteer Fire Department, Tracy talks about teamwork and respect, and Dean talks about the incredible commitment of time.

“You better have plenty of time to give the department. If you’ve got a pretty full plate to begin with, it isn’t for you, because something’s got to give… It’s a major commitment.”