A Where Are They Wednesday with Martha Opstvedt Blount 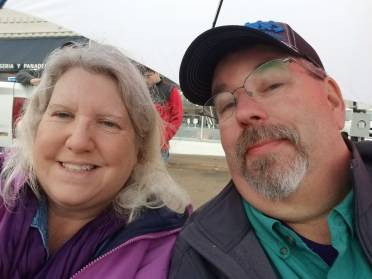 Pictured is Martha with her husband, Jon

Martha Opstvedt (pronounced “Upstreet”) Blount, a 1981 graduate of Nevada High School, has so many incredible mem ories of Nevada, locals will have to keep reading this story to see if they remember all the things she recalls about growing up here.

“I am, and probably always will be, a small-town girl at heart. I think Nevada taught me to take care of one another by looking out for your fellow neighbors,” said Martha, who is 58 and now living in Mesquite, Texas, a suburb of Dallas.

“I will always call Nevada home,” she noted, and she’s hopeful her class will hold its 40th reunion this year. “If I remember right, we were the largest graduating class up to that time.”

After graduation from Nevada High School, Martha attended Northeast Missouri State University, now Truman State, in Kirksville. She majored in Special Education. “I credit my love of Special Education to Ray and Ruth Long. They were our neighbors in Nevada. They fostered special needs kids, and those kids were my playmates. One in particular was a girl named Mary Ellen. She had Down Syndrome. She was an eager learner. I loved playing school with her under the apple trees in the back yard. I have always credited her with giving me the inspiration to teach,” Martha said. She received her bachelor’s degree in education in May of 1985.

Now retired from the Dallas Independent School District, Martha taught Special Education for 35 years. She started out in Houston, Texas, teaching one year, before moving to Dallas, where she spent the next 34 years.

“Teaching is one of the most rewarding careers out there,” she said. “When I would see the little victories my students made, my heart would leap with joy. I never forgot that parents entrusted me with their children, and I hope I never disappointed them.”

Martha makes it clear the pandemic didn’t influence her decision to retire last year. “2020 had always been my plan. I thought that was a nice round number. I have the utmost respect for those who have been in the trenches this year giving it their all.”

Martha is a busy retiree. “I volunteer at various events in the city. I have recently been a volunteer at the FEMA immunization mega site in Dallas. I got to meet some interesting people while they waited their 15 minutes after injection,” she said. Her family also spends the Sunday before each Memorial Day placing flags at the DFW National Cemetery. “It’s a beautiful sight to see,” she said.

Martha and Jon have been married since 1989. He is an e-commerce specialist for Rexel Holdings, North America. “Jon and I enjoy volunteering, shopping at flea markets and estate sales, and taking little road trips around the area,” she said. Her husband is also involved with Scouting, both at the local and national levels.

The Blounts raised three sons, and Martha said they are lucky to have all

three boys still living in the area. Two are married and the youngest is in a serious relationship. “I’m waiting impatiently to join the Granny Club,” Martha said. She has three “granddogs” to spoil in the meantime.

Martha said she tries to get back to her hometown once a year. Her most recent trip was in March.

Martha has a brother and sister-in-law living in Story City and a bunch of cousins in the area, too. “My best friend, Sandy (Young) Conrad is in the area, as are Lisa (Knott) Anderson and Julie (Banks) Oxley. Rosemary Hinderaker is like a second mother to me. I make a point to stop and get a hug from her every time I’m back.”

When she’s back in Nevada, Martha has the following seven-part “must-do” list:

1. George’s for sausage and mushroom pizza and cheese bread;

2. Starbuck’s for a beef burger and cheese curds; 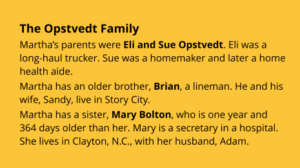 3. Ben Franklin to check out all the fun stuff;

5. Multiple trips to Fareway or Hy-Vee to stock up on AE dips, cottage cheese, and chocolate milk;

7. Dinner and a margarita at Mi Casita.

“If I’m lucky to be back home during the holidays, I will indulge in AE eggnog. I am forever on a quest to find some that is just as delicious here in Texas,” Martha said.

Being back in Nevada is also about memories:

Martha also recalls the special people who influenced her in positive ways during her time in Nevada. “Mrs. Jacobson taught me to read in first grade with ‘Dick and Jane’… Mr. Frank taught me it was against the rules to throw snowballs at recess and especially wrong to hit the principal with one. I still have bad aim to this day! I must give a shout out to Coach Kellogg. He taught me and countless others to drive. Bless that man and his patience!” And she remembers JoAnn Hunt and Dr. Meyers. “JoAnn gave me my first job at the grocery store, and Dr. Meyers pierced my ears.”

She could go on, with the memories and the people who helped shape her life. “I think of them often, and they bring a smile to my face.”

Share on Facebook
Share on Twitter
PrevPreviousRunners’ group continues to bring new people and possibilities to Nevada; and you won’t believe what the group just added to one of its summer events
NextGarden Plots now available to public at new Nevada Community GardenNext