Runners’ group continues to bring new people and possibilities to Nevada; and you won’t believe what the group just added to one of its summer events 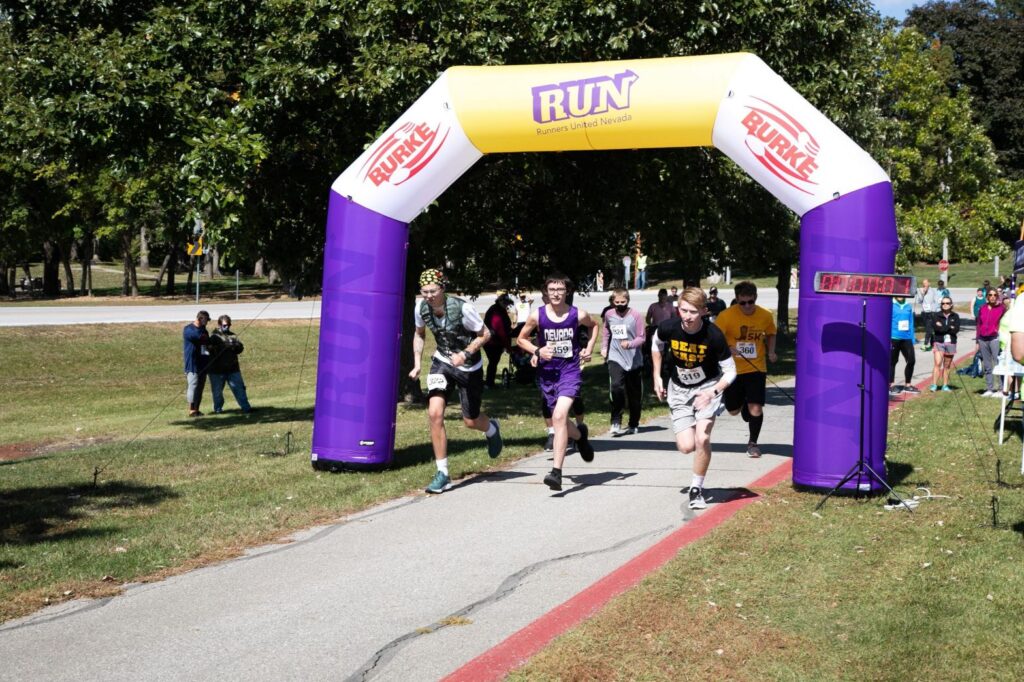 Runners United Nevada (RUN) members never imagined when they became a group of folks getting together to run socially in 2017 that they would become a significant force in the quality of life here in Nevada. But they are.

Not only is RUN improving the quality of life for local residents, but RUN events have also introduced many new people — race participants and their supporters — to the Nevada community.

“In some ways, we benefitted from COVID,” said Dane Nealson, President of RUN, which in 2018 incorporated as a 501(c)3 entity. With many events canceled during the pandemic, Nevada’s RUN events flourished over the past year. “We were able to give people an opportunity to safely come together.”

“My husband, Jeff, and son, Caleb, were planning to run the Okoboji half-marathon in July. However, we got notice that it had already been canceled,” Sarah said.

Jeff and Caleb were on the hunt for a replacement half-marathon.

“Unfortunately, summer races of this length are a little harder to come by, and the ones that traditionally are offered had been canceled,” Sarah said.

The light bulb went on when the Gilchrists realized other people might be in the same boat, leading to the idea of hosting a half-marathon in Nevada.

Sarah pitched the idea to the RUN Board following the recent very successful and record-setting Donut Dash, which RUN hosts with Bricktown Bakery.

“[The Donut Dash] was our most well-attended running event in Nevada history,” Nealson said. “We had 124 register, almost all of whom turned out.”

Nealson said Paula Feltner, who owns Bricktown Bakery with her husband Mike, “knocked it out of the park” with the Donut Dash. People ran or walked while dressed as donuts, unicorns, rainbows, and more vying for the “free donuts for a year” prize.

Coming off that big success, no one would say “No” to Sarah’s big idea.

Sarah and her husband have worked with a couple of mapping websites to develop 13.1-mile course options in Nevada. “We wanted to make sure the railroad crossings wouldn’t be a factor, which makes it more challenging,” she said.

They’ve been looking at a course limited to the south side of Nevada, utilizing SCORE Park trails and the trail system, 11th Street out toward the country club, and the Hertz Family Woods & Nature Preserve.

The half marathon will be an option for those attending the Story County Freedom Run 5K & 10K. Nealson said the 10K is also a new option this year. The Freedom Run, an event that RUN took over from a previous committee that held the event to raise funds for the Story County Freedom Flights for Veterans, will now give participants the “freedom” to choose which of the three distances they tackle.

The Freedom Run is the second of four events in the RUN Nevada Race Series 2021. The Race Series is possible thanks to significant support from Nevada’s Burke Corporation and other sponsors. Here’s the full 2021 schedule:

The biggest challenge in putting on the longer distance races will be finding enough volunteers to be stationed at various points and intersections along the route. “We would love to see the community, neighborhoods, friends, and families come out to cheer on the runners, especially during the half-marathon,” Sarah said. “I’ve run three half-marathons myself and coach middle school cross country. I know how important it is to have people lining the streets cheering, holding up funny signs, standing near the road to spray you with a hose, just encouraging you to keep going!”

As for the quality of life benefit we mentioned at the beginning of this story, Nealson said it’s possible because of continuous improvements made by RUN and the group’s ability to utilize some of the city’s great amenities.

“We are blessed with a terrific trail system, which allows us to come up with a variety of unique courses for each event… We’ve got a strong board that meshes together well… and our sponsors give us the resources to continually improve the experience for our runners.”