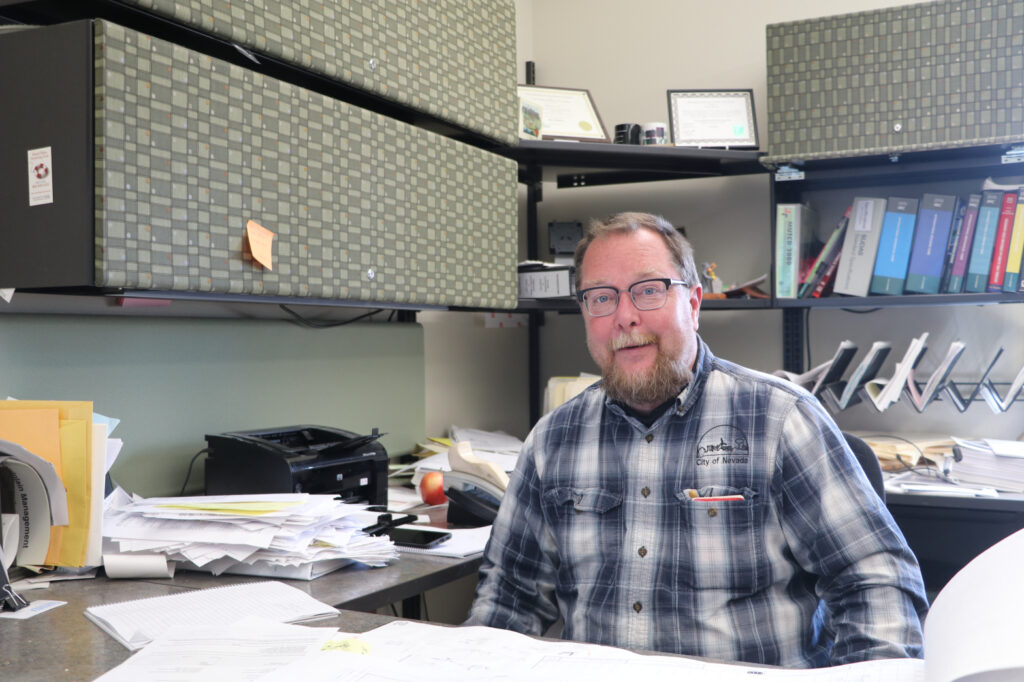 After 20-and-a-half years with the City of Nevada, today is Shawn Cole’s last day here before he heads to the City of Ames for a new adventure.

Cole, who has been the City’s Building and Zoning Official since April of 2002 (he served his first two years as a building and zoning officer under Scott Harter), has taken the position of Cross Connection Control Coordinator in Ames.

“I’m excited about the new job,” Cole said. “It’s something different, a new opportunity.” His focus in the new position, he explained, will be to keep contaminants from getting into the water supply.

Cole graduated from South Hamilton High School in 1986 and then attended Iowa State University. He worked as a licensed plumber before being hired by the City of Nevada.

The most enjoyable thing for him about his work with the City of Nevada, Cole said, has been “seeing the community’s success.”

Cole believes Nevada residents can feel pride when they think about their town. “Be proud. Nevada is a nice place.” Cole said during his years, a lot of clean-up in the community has happened.

“People need to take the time to really appreciate what’s here,” he said.

One of Cole’s fondest memories was serving on Nevada’s RAGBRAI committee in 2018, the year RAGBRAI came through town. As someone who has ridden on around 30 RAGBRAIs himself, Cole said, “it was rewarding and interesting to be on the other side of the ride. We had a lot of positive feedback from RAGBRAI’s organizers and from riders” on what Nevada offered as they passed through.

When it comes to City projects, Cole said a recent project stands out as his favorite in Nevada. “This is one that will really make a difference for the future,” he said.

Cole explained that the City is taking its Geographical Information System (GIS) data and, with the help of the City’s engineers at HR Green, “we are putting it online to be accessible to every City employee through an app on their phone.”

“Every day, we generate data (through City work), and the challenge with generating lots of data is the ability to access it. We can take the data and file it in a system on a computer or in a filing cabinet, but it’s not as accessible and available in a timely manner that way,” he said. “We are now just starting to take the data we generate and have it available in real time to everyone working for the City. You will know where things are at, and you won’t have to work here for 30 years to know it.”

Cole said he’s proud to be able to get this project going for Nevada. “I’m hoping it can be used by everybody… and become more refined as they go along,” he said.

Many Nevada residents may know Cole as the guy who walks to work and walks to the Post Office every day for the City’s mail. Getting the mail has, he said, “been my way of helping out.” And he enjoys exercise. As an avid biker, Cole, who will continue to live in Nevada, plans to ride a bicycle to work in Ames when the weather allows. He plans to utilize the Lincoln Highway bike path.

Other favorite pastimes for Cole include following Cyclone football and basketball and following the sports and activities of his nieces and nephew at Roland-Story.

The City of Nevada would like to thank Shawn Cole for his years of service to our community. We wish him much success in his new role with the City of Ames.