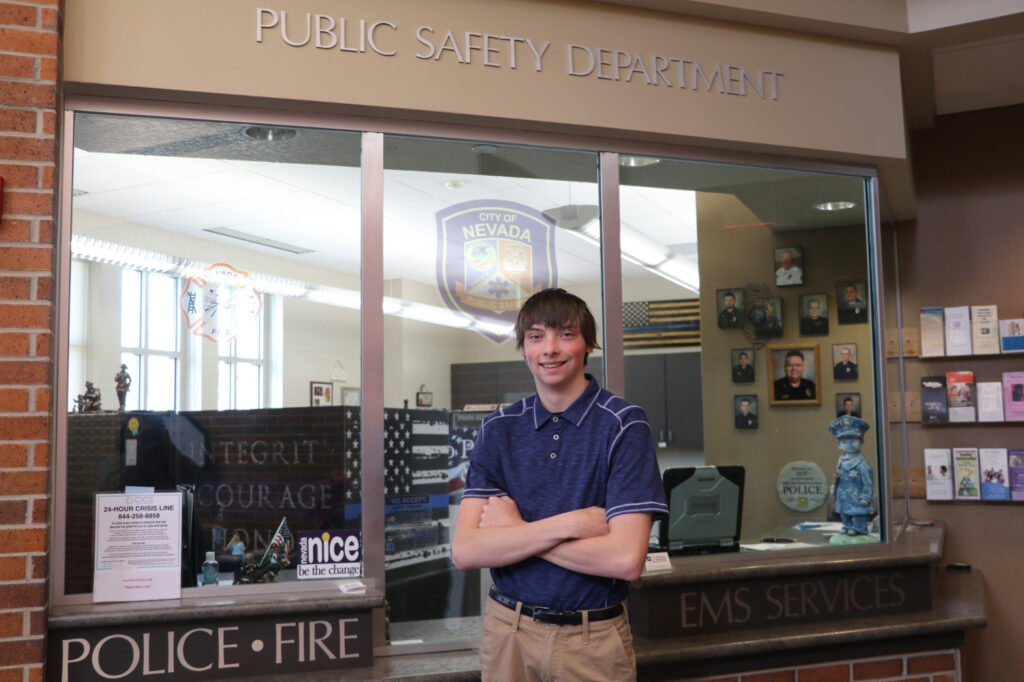 Since mid-January, Will has been coming to the City Hall/Public Safety Facility regularly for a high school internship focused on law enforcement.

“I’ve always been interested in law enforcement,” Will said. And rather than do nothing or take another in-school class, Will decided he would fill out his second-semester schedule with the internship opportunity.

“Part of our responsibility as educators is to make sure there is a good transition to life after high school,” said Nevada High School Principal Kristian Einsweiler. “With work-based learning opportunities, like our business internships, students can get exposure to careers that we can only offer a glimpse into in the classroom.”

Einsweiler said Will had expressed an interest in possibly working in law enforcement, and “after some digging, he was able to be placed with the Nevada PD.”

Within the first few days, Will said he met Police Chief Ricardo Martinez II, who is also director of the Nevada Public Safety Department, which encompasses the police and fire departments.

“He (Martinez) was extremely nice and very professional, and the first few days I worked with him, he toured me around the building, and gave me a little project,” Will said.

The project was a great learning experience. “I got a list of everything officers carry on their person and keep in their cars, and I had to research each item and come up with the cost of everything an officer uses. It was actually more expensive than I was thinking it would be,” Will said. He also admitted the officers use a lot more equipment than he thought they did.

As an intern, Will has spent time helping with tasks in the office and riding along with officers. “I really thought (before this internship) that there was a lot of judgmental ‘targeting’ by officers,” Will admitted. “But it’s not like that at all. I think they’re extremely fair on how they treat people.”

Will also had the opportunity to see the inside of the Story County Jail while working with Fire Chief Ray Reynolds, who was installing some smoke alarms in the jail. “It was neat to see how everything works there,” Will said.

He rode along as one officer “EGGed” houses during the fun community activity the officers did this spring, and he’s spent some time with Detective Sgt. Andrew Henderson.

Overall, “it’s been nice to get out of the school and have some experiences in the real world,” he said.

Martinez was glad to provide the internship experience at the Public Safety Department. “As an intern, Will was able to see what officers do on a regular basis,” Martinez said. “There is much more behind the scene activity than most people realize.”

While law enforcement is one career area Will had been considering, the soon-to-be graduate said he’s decided to go down another path for now. Will plans to train to be a lineman. He’ll attend a program in the trade at Marshalltown Community College and then do a four-year apprenticeship with Alliant Energy.

“My uncle works for the City of Ames in its power plant, and he was talking about how they need workers in this area. Lineman is one of the jobs they need. I started researching this career and fell in-love with the idea,” said Will, who said there are so many lineman jobs out there, and he likes the idea that it might involve travel.

He also doesn’t believe he has to commit to one career forever. Will said he’s open to the possibility of switching to something else, depending on what fits with his life at any given time. He notes the option of law enforcement, especially detective work, could still be part of his future “down the line.”

Will has grown up in Nevada and gone through school from kindergarten through his senior year with his twin sister, Gabrielle. She, he said, is still considering going into the criminal justice field after high school. Will and Gabrielle are the children of Barb Neal, who works for CyRide, and Steve Owen, a judge in Story and Boone counties. The family also has a Lhasa Apso poodle, Blackie, who is 13.

Martinez also commented. “I’m glad we were able to allow him to see and learn about law enforcement to help him make life decisions. Will is a very nice young man, and I’m happy his experience was beneficial.”

In Will’s case, the internship gave him a window into what criminal justice and law enforcement look like at the local level. “I learned that they (employees of the Nevada Public Safety Department) work as a team. If there’s a bad day, or really busy day, they might give each other a hard time in a fun way, and they always get the job done.”

As to younger students who might be considering an internship, Will encourages them to do so. “There are a lot of internship possibilities out there.”