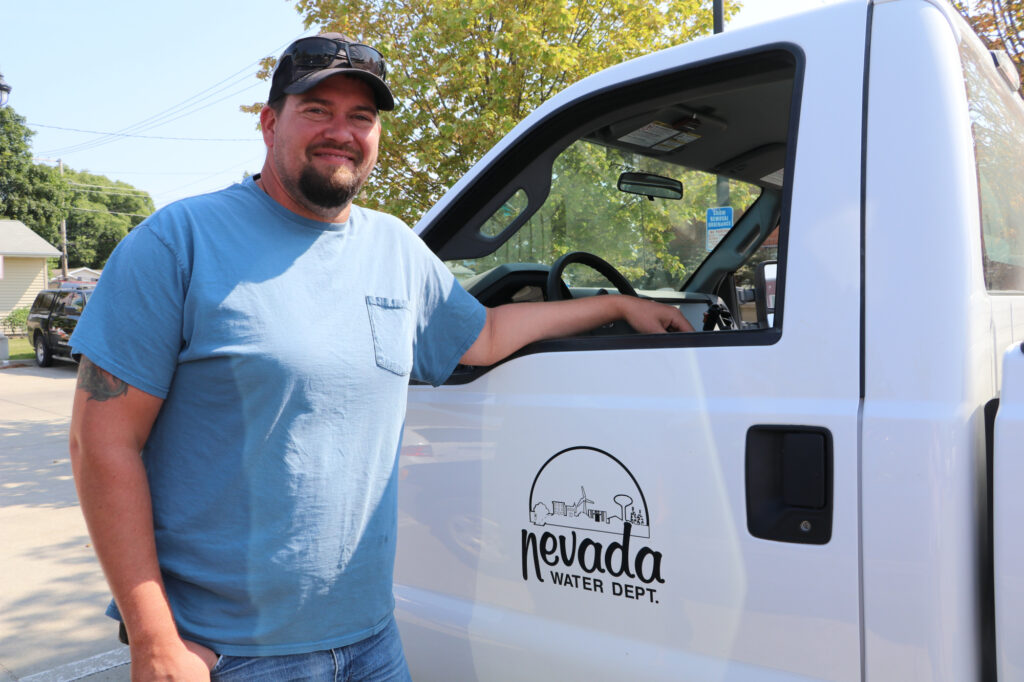 A 2002 Nevada High School graduate started work with the City of Nevada this week.

Charlie Starbuck (his given name is Charles, but he’s always gone by Charlie) is a new Water Operator in the City’s Water Department.

“I wanted the retirement benefits,” Charlie said about taking this position, but he also noted it would be great working close to home and not having to travel.

With one of his previous employers, ALMACO, Charlie worked as a mechanic and traveled a lot. “I spent nearly all of three years in Brazil,” he said. While he thought it was nice to see new places, he also noted, “it’s hard to be away from family.”

Charlie started working when he was a teenager, getting his first job with Nevada Lumber Company at age 14. He later became a porter, detailing and delivering bikes, for Zylstra Harley-Davidson in Ames. He was working at Zylstra when he graduated from high school.

After Zylstra, Charlie did his five-year stint with ALMACO, then left ALMACO to work for Ranko Equipment in Des Moines as a mechanic and territory sales manager.

The pandemic brought an end to his work at Ranko, so he joined a local construction company, One Off Builders in Nevada, owned by one of his former Zylstra co-workers, Johnny Johnson. “We did mainly remodels.”

Now, at 38, Charlie is ready to learn all there is to know about Nevada’s water operations.

He spent his first day doing some paperwork and computer work, as well as being out reading meters with Water Superintendent Shawn Ludwig.

For many, Charlie’s last name brings thoughts of beefburgers and soft-serve ice cream. Yes, he is related to the Nevada Starbuck’s Drive-in founders.

“Darrell and Jean Starbuck (both deceased) were my grandparents,” he said. And, “no,” he never worked at their business. “Grandpa sold Starbuck’s when I was in high school.”

Charlie lives with his girlfriend, Melissa Skinner, who is originally from Carroll. She works at Iowa State University.

When it comes to living and working in Nevada, Charlie said he loves the feeling of this small town. “This is where I was born and raised.”