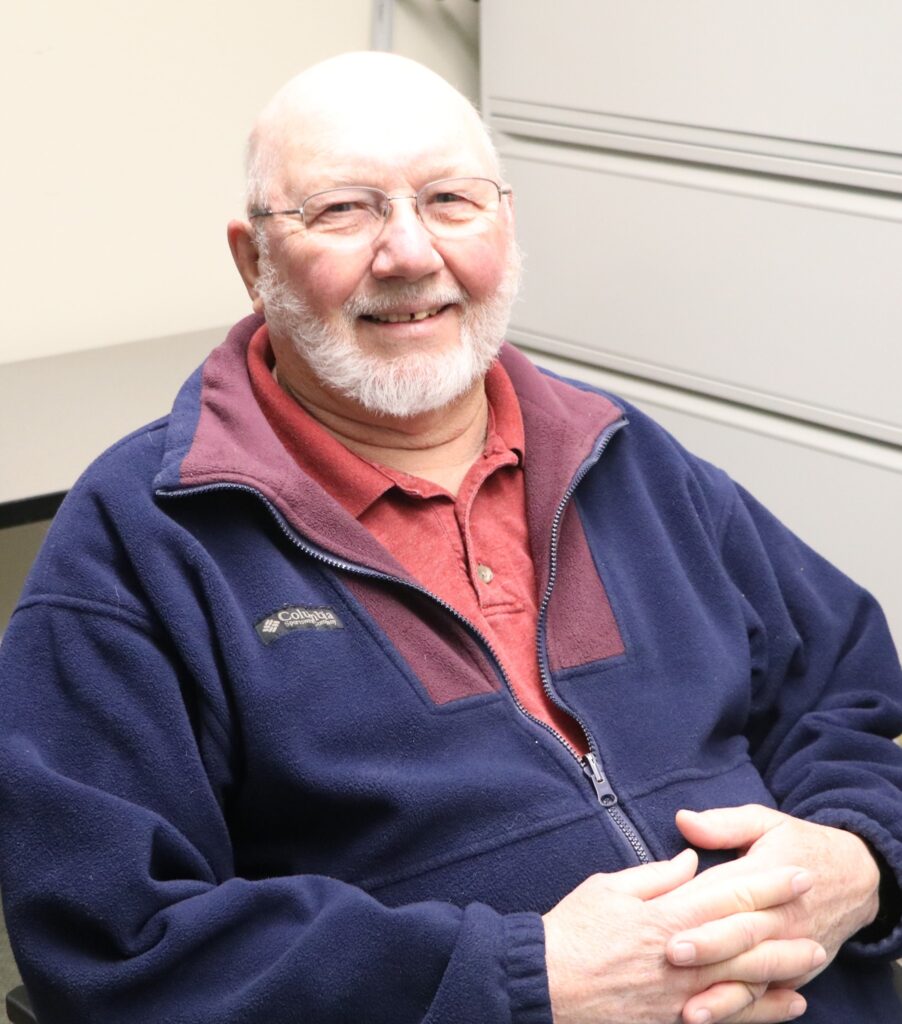 Jim Fischer recalls his experience as one of the early NEDC Board members.
“Twenty years ago was the best time to plant a tree. If you didn’t do it then, today is the next best time.”
Jim Fischer shared this profound statement as he talked about the early days of the Nevada Economic Development Council (NEDC). Fischer, then the local manager of Iowa Electric Light & Power Company (later Alliant), was part of the first NEDC Board. He has candid thoughts about that time in Nevada’s history.
“I remember one of our first (NEDC) meetings, a comment was made that it doesn’t cost anymore to dream big dreams than it does to dream small dreams,” he said and emphasized the NEDC’s first big challenge in the early 1990s was to get started; to plant the tree. “We had a nice town, a friendly main street and a lot of ideas.”
They had no ground until they finally got one piece of ground “out west,” he said. “It was mostly a farm.”
Fischer starts to chuckle, remembering the night the NEDC members presented a proposal to the “very conservative” Nevada City Council to put in one street on that piece of land (what is now part of the West Industrial Park).
“We were asking the Council to spend several hundred thousand dollars… to put in ONE street.” The memory of their reaction brings the chuckles. “It was a big shock to some of them! Even with my background, it was a big piece of loose change and a big commitment.”
Fischer’s background included calling on significant business customers and prospects to help them plan their utility needs for new buildings or expansions. “I wore a number of hats (with Iowa Electric), and one of those was with economic development. I really enjoyed it. Whenever there was a training session offered (for economic development),” he said, “I attended.”
He’d gone cold-calling with other Iowa Electric managers in cities. Chicago and Kansas City were two. This experience gave him the tools needed for the work that was ahead in economic development in Nevada.
Fischer recalled two heads of banks, Dan Engler and Bill Tufford, as being key in helping with finances. “Between the financial community … and some arm twisting, things happened. My company (Iowa Electric) put up a lot of money, the banks were quick to match what we were raising. It was a lot of players putting some money up with no sure return.”
Fischer remembers many very long talks by the NEDC Board. Once they got the land, they had to figure out infrastructure. They also made calls to many heads of business in the community to hear their opinions about what was going well and what needed work. “We also tried to get support for what the NEDC was doing… The next discussions were about what do we go after; what do we key in on? And how do we protect people who are already in business, when we’re looking to bring in other business?”
They paired up and divided all the heads of business they needed to interview. Denny Henderson (first City Administrator) and Fischer became partners, and Fischer has tremendous respect for Henderson to this day.
“Without him (Denny Henderson), I don’t think the NEDC would have amounted to really as much as it ended up being. He was able to make things happen. He and I, as a pair, we literally got our butts chewed by several business people,” Fischer recalled.
“With some things we could help; some things we couldn’t, but Denny had a way of energizing people on the Council and helping the Council understand some of the problems (standing in the way of economic development).”
Fischer, himself, had the pleasure of inviting Bill Burke Jr. to the NEDC Board. “Bill brought an enormous amount of understanding to the NEDC about how the big industries work and what they’re looking for. And this was important, because the NEDC was a group of people, and we had representation from the City Council, and the School District, and this group and that group … and all of them had a little different view of how things could, or should, or might work.”
All these people worked tirelessly to make the NEDC happen. “We did all have a part in where we are today,” Fischer said. “If we had not all worked together to make the West Industrial Park what it was, the East Business Park never would have happened.”
Fischer has no regrets about the time he gave to the NEDC Board. “The only regret I have was that my job (with the power company) changed and I became an area manager, rather than a local manager. Consequently, I didn’t have the time to devote to the NEDC after that change.”
He had about seven or eight years with the NEDC, though, enough time to affect change.
Now retired – he and his wife Judy (many remember her working at Subway) live on an acreage southeast of Maxwell – Fischer said when he’s in Nevada running errands, visiting his kids, or attending an event, he can’t help but think back to those years on the NEDC Board. “We did have a part in where Nevada is today,” he said.
“When we are in Nevada… I smile because I drive past Burke Marketing and see its big expansion; I smile when we go past ALMACO. I think of what they (many of these companies) were when we moved here – or maybe what they weren’t – and what they’ve become… That gives me a real warm spot.
“Being on the NEDC Board was truly a great ride, and I met and worked with some really great people.”
–Written by Marlys Barker, City of Nevada
Share on Facebook
Share on Twitter
PrevPreviousBeautiful weather accompanies this year’s Memorial Day Services in Nevada, IA
NextFourth of July plans taking shape in NevadaNext