Difference Makers — She’s been serving on the City’s Parks and Rec Board 38 years and isn’t ready to step down yet! 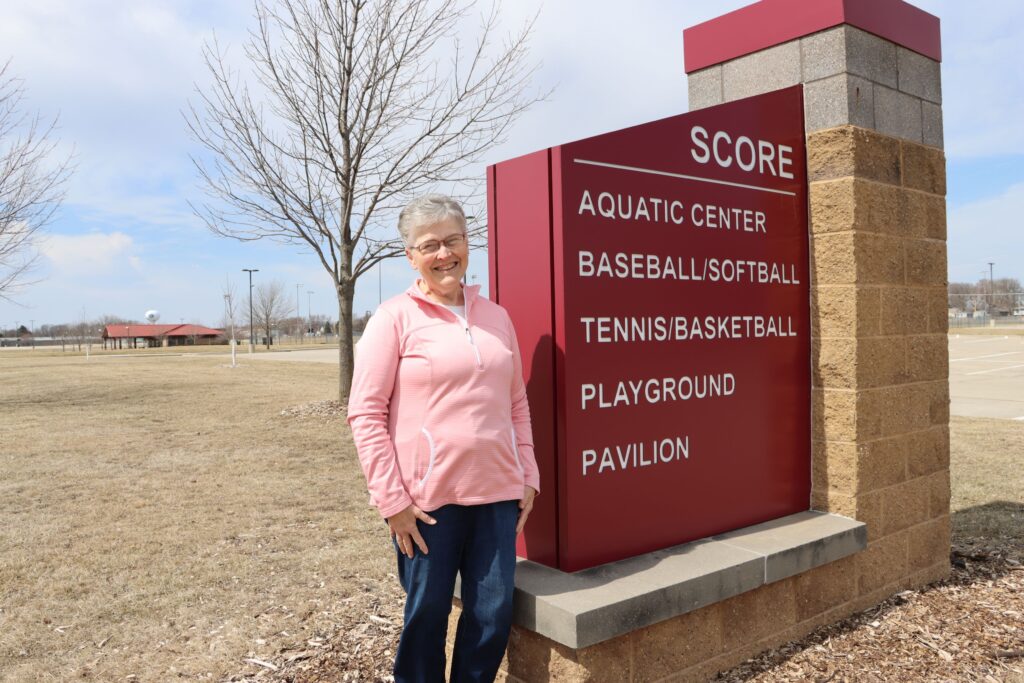 In 1984, when Deb Parker, 71, first joined the City’s Parks and Recreation Board, she remembers that Nevada had just three parks to oversee – Kiwanis Park, Hattery Park, and the Billy Sunday Field area west of the fairgrounds.

Deb — who had moved to Nevada in 1978 when her husband, Larry, took a job teaching seventh grade science — was encouraged to join the parks board by her pastor, John Chadwick of Memorial Lutheran Church. “He was leaving the community to take another call and had been on the parks board. He thought it would be a good thing for me to do.”

Thirty-eight years later, Deb is still serving the community in this capacity and has very much enjoyed the position and all that the board and the Parks and Recreation Department has achieved.

Looking at the recently released 2040 vision plan for Nevada, she notes the growth in acres of dedicated parkland in the community. “We now have 189 acres. When I started, there were 16.8 acres of park ground, which included the old swimming pool (now part of the parking lot for the high school). When I added this all up, I thought, ‘Oh my goodness!’”

Deb and her husband, Larry, met as high school students at Grinnell. After high school, Deb went to AIB to become a legal secretary, and Larry went to Central for his teaching/coaching studies.

Deb eventually joined him in Pella and worked for a few lawyers there. Larry took his first teaching position at Stuart-Menlo, which is where the couple lived before settling in Nevada. While Larry taught and coached track and cross country for over 30 years, Deb had jobs as a Memorial Lutheran Church secretary, a legal secretary at the Miller-LoRang-Olberding office, and then worked as a secretary in the College of Design at Iowa State University for 23 years. She retired about nine years ago.

She hasn’t, however, retired from the Parks and Rec Board.

“I always see another goal that I would like to see happen for Nevada,” she said, about what keeps her active on the board. Looking back, “the first goal might have been the pool (replacing the old pool that was located behind Gates Hall),” she noted. “Getting the new aquatic center for Nevada was a big goal and when that was accomplished, it was ‘wouldn’t it be nice to have a trail system or another park in this or that area,’ and now, we’ve got a field house to build.”

When she thinks about that first big goal – building Fawcett Family Aquatic Center, now 22 years old – she said accomplishing the aquatic center really opened up more opportunities. “It allowed us to provide even more amenities at SCORE, and how cool is that? I think small-town Nevada is pretty fortunate with our facilities and our grounds and our parks.”

Every once in a while, Deb said, “we’ll get pushback from something we are going to do in a park or how we are going to build in a park area, but there’s not too much dissension.” In fact, she added, “most people would like to see more (projects), and the hardest part is probably keeping within our budget.”

This is where Deb mentions how incredibly, fortunate the Parks and Recreation Department has been to have so much support from the community. “Our capital fundraising for projects has astonished me,” she said. “We’ve also had awesome support from our City Council to do the things we’ve wanted to do.”

Serving on the Parks and Recreation Board is not only fun because of the projects, but is also rewarding because of the people, Deb noted. “Our (parks and rec) staff has always been really good and very focused on the community and on the future and how to grow Nevada and the park system and recreational offerings. It’s always been about how we can make Nevada better. The people I’ve worked with (on the staff and the board) over the years have been amazing. I’ve gotten to know a lot of people I wouldn’t have known otherwise.”

When she is out and about enjoying Nevada as a retiree, Deb said one of her favorite recreational places in Nevada is SCORE. She loves that she can ride her bike there and catch the trail to the west side of town. She also loves when she is out walking or biking and sees other people enjoying the space.

“If I’m walking in the afternoon during the summer and I see how many people are at the pool, or I see other people using the trails to push a stroller or walk their dog… It’s seeing people using what we’ve worked on and given to Nevada that gives me satisfaction. Seeing the four-plex full with games, and seeing how many people the tournaments at the four-plex have brought in from all over – this makes me very happy.”

She believes the addition of the field house will bring even more people to SCORE, and will provide a place for all kinds of sports to be played or/or practiced in the winter months. “I’m really excited about the versatility for all different ages.”

As for her future on the Parks and Rec Board, Deb said she has discussed retiring with Parks and Recreation Director Tim Hansen several times. “Tim said I can retire any time I want, even in the middle of a term, and I think that’s how he gets me to agree to another six-year term,” she laughs. However, in all honesty, it is another goal that is keeping her committed at this time. Deb wants to see the trail connection happen when the new flyover is constructed at S-14 and Highway 30. (The work is scheduled to start in 2023).

She also knows the time will come when she will step away from the Parks and Recreation Board, and she is hopeful it will create an opportunity for someone else to have a wonderful experience on the board. “It’s a valuable experience to have. You don’t really know the workings of your City sometimes until you step out of your little box and get involved in things.”

They have three children, a daughter and twin sons, and seven grandchildren.

Daughter, Christi Patrick and her husband, Luke, have two daughters. Christi is a pharmacist and Luke is a psychologist. They live in Portland, Ore.

Son Mike has two daughters. He works in management for a safety equipment company. He lives in Oswego, Ill.

Son Craig, and his wife, Kara, have two sons and a daughter. Craig works in business management with Cargill. They live in Victoria, Minn.

The Parkers oldest granddaughter is now a freshman at Drake University in Des Moines, and Deb notes this is the closest that she and her husband have ever lived to one of their grandchildren. “We love that we get to spend more time with her now.”