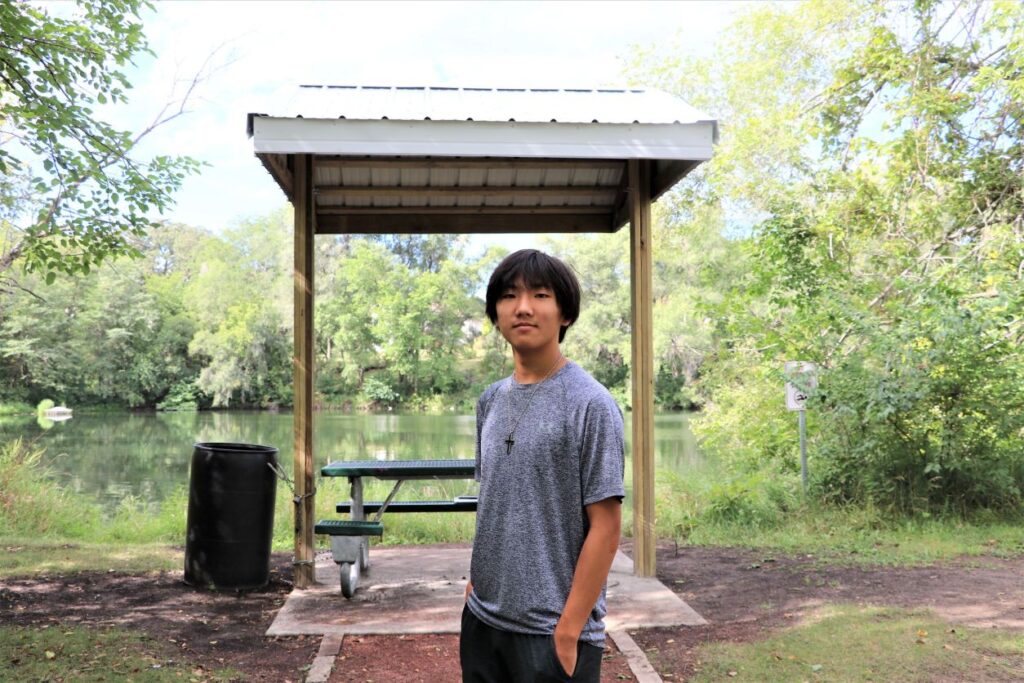 Nick Frideres stands in front of the new shelter erected for his Eagle Scout Project and finished earlier this month.

A Nevada High School student completed his Eagle Scout project this summer and helped the Nevada Parks and Recreation Department in the process.

Nick Frideres, a member of Boy Scout Troop 128, who will be a junior at Nevada High School this fall, made it his summer mission to rebuild the little shelter house that sits by Wilson Pond. (Wilson Pond is located by the trail loop, west of the city cemetery.) The shelter was damaged during last summer’s derecho, and Nick had noticed that it needed some attention when he was out on his runs.

“I run along here for cross country,” Nick said, while sitting at the picnic table under the shelter this week. When considering possible Eagle Scout projects, he brought up the little shelter. “My brother, Elliott, suggested I go and ask Tim Hansen (Director of Parks and Recreation) about it.” Elliott, who is a college freshman this year at Loras College, did his Eagle Scout project with Parks and Rec. He had worked on public flower bed replacements in the City.

Nick took his brother’s advice and reached out to Hansen, and it was soon decided. Nick could do the little shelter project. “The really sweet thing was that all the funding was handled by Parks and Rec,” Nick said.

Nick started by planning. “You have to follow the guidelines given by the Boy Scouts, so I had to think through what things I would do myself and what things I needed help from others on,” he said.

The planning involved lining up people to work, determining the materials needed, and consulting with his uncle. “I have an uncle who is a contractor and builds houses… He came down and helped me with the process,” Nick said.

Not only did the shelter need to be replaced, but as they looked at the project, they saw tree roots coming up through the original concrete and determined it would be good to put new concrete down, as well.

As for the shelter itself, “my original thought was to try and keep the shelter like the one that was here before,” he said. And, the completed one is very similar to the old shelter in both size and look.

After getting his plans in place in July, Nick said it took about two full work days to do most of the work. The shelter was completed earlier this month on Aug. 5.

In all, about 17 people, both fellow Scouts and adults, helped Frideres on the project. “Not everyone was there at the same time,” he said. “A lot of the adults were here mostly to supervise.”

One task he and fellow Scout members tackled was to haul the lumber and materials to the site. “Those were dropped off by Billy Sunday Field, and we had to get it to the site,” Nick said. They were able to utilize a little tractor to help with a lot of the hauling.

Nick said he learned some valuable life skills by doing the project. He learned about construction, of course, and he also learned about processes. “I learned that it’s a lot harder to plan everything out in your head and put it on paper and execute it than I thought it would be.”

Looking at the finished shelter today, he noted, “I’m proud of the whole thing honestly. I knew it could get done, but it’s like… wow!” He also was pleased to have Hansen stop by during the process. “He was really impressed. I thought that was really nice of him to stop by,” Nick said.

In addition to the learning, it’s also important to note there was some fun involved in the project. “We had music playing, and we had drinks and snacks. We switched off a lot and had rotations for some of the work. But being together is what was really fun.”

Nick is the son of Mark and Meg Frideres of Nevada. In addition to his older brother, Elliott, he also has a younger sister Lilly, who is going into 8th grade. Nick has been involved in Scouting since he was about 6 years old. He started as a Cub Scout and then transitioned to Boy Scouts in the fifth grade. Nick said his future plans are to go into engineering, because he likes math and science. Right now, he said, he’s just focused on passing all his classes at Nevada High School.