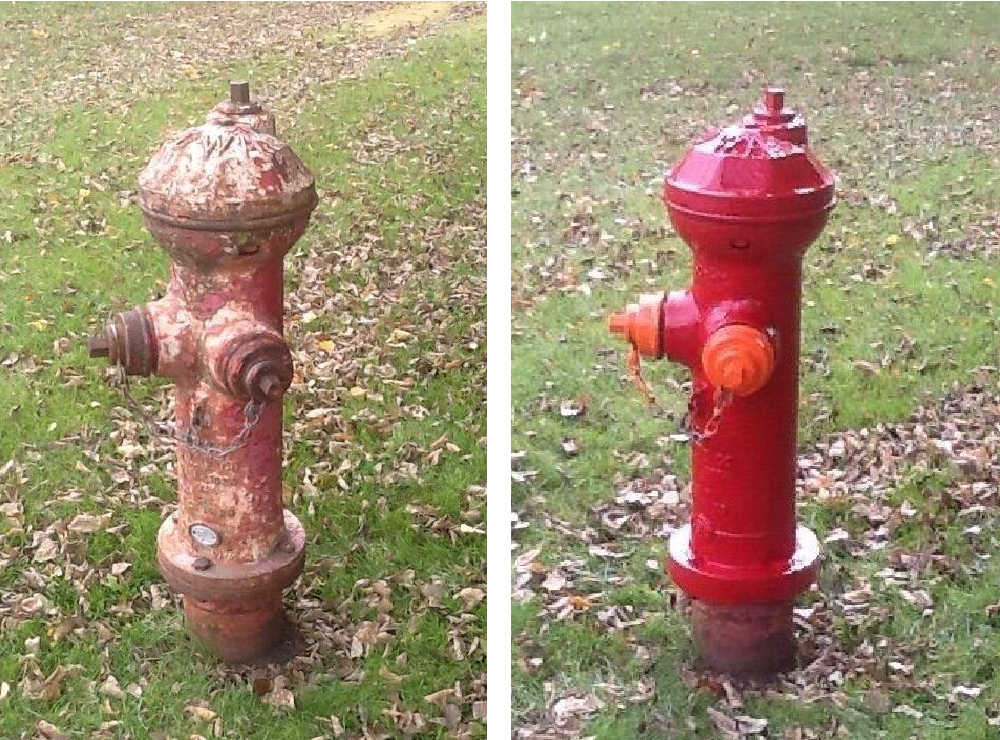 Seven gallons of paint may not seem like much, but for the Nevada Fire Chief, anything the fire department can receive to improve fire protection for the community is a win.

“Our department is heavily involved in seeking grants. It is a way to accomplish a lot of things and save the taxpayers money,” said Chief Ray Reynolds.

The Nevada Fire Department recently found out it won seven gallons of paint through the Paint Iowa Beautiful initiative with Keep Iowa Beautiful and Diamond Vogel. The department will need to buy more paint for its project, but “seven (gifted gallons) is better than zero,” Reynolds said.

The paint will be put to good use on April 23, when the fire department expects a group of Nevada High School students to help paint hydrants as part of the school’s annual Day of Service.

“I was surprised that kids actually like painting the hydrants,” Reynolds said about the reaction from past school groups.

Painting of fire hydrants in Nevada started in 2014.

“Shawn Ludwig runs the City Water Plant. He provided the fire department red paint for all the hydrants in 2014,” Reynolds said. Ludwig and Reynolds share the task of making sure the City’s hydrants are well maintained and operational.

“There is nothing more important to a fire chief than the firefighters who serve our community. I owe it to them to provide the best water supply possible as they make the choice to enter a burning structure,” Reynolds explained. “Without a hydrant, they have three minutes to either perform a rescue or knock down the fire. It is generally bad practice for the fire department to run out of water when we’ve shown up at a burning house.”

The City has 300 mapped hydrants, and as new developments are added, developers are required to add enough hydrants to assure placement within 150 feet from new structures. “We are getting closer to 400 hydrants to maintain and paint,” Reynolds said.

The City’s fire and water department personnel work together to remove every cap every year during hydrant flow testing.

In 2014, when they started to repaint hydrants, “some of the caps were hard to get off and had rusted on tight,” Reynolds noted.

While hydrants are typically red, Reynolds wanted to repaint hydrants and follow the National Fire Protection Association’s standard for minimum water flow from a fire hydrant. As shown in the table, when firefighters see one of the four colors on the hydrant cap, they can predict the amount of flow they will have, which is critical to their decisions in fighting each fire. 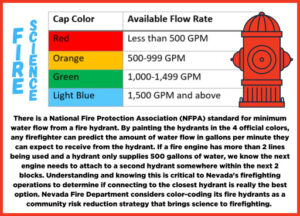 As explained by Reynolds, the department uses any colored hydrant to supplement the amount of water carried on the fire engine, including the 500-gallon-per-minute hydrants. “Residents should not feel any less protected with the different color of their closest hydrant. The fire department trains for connecting multiple hydrants if additional water supply is needed.”

Painting hydrants is also a matter of community betterment. “When people visit our community, they notice things. Yes, the fire hydrant serves a practical purpose of supplying water to fight fires,” Reynolds said. “But I can’t help but think if people drive through our community and notice we care about the little things, that makes a good first impression. Maybe they’ll invest in Nevada or move to Nevada.”

He continued with another of his beliefs, “A crummy, scraped up, faded fire hydrant does not instill confidence in your fire department or your community. I want people to know we are on top of it. Caring for the tools that support the fire department is important.”

High school kids who sign up to work with the fire department on their upcoming Day of Service can be part of this vital community mission. “We hope to paint all the main hydrant stems red again, and then have the students help us paint the caps the correct water flow colors,” Reynolds said.

Kids who help the department will be treated well. “The department usually grills burgers for the kids,” Reynolds said.

He likes treating the kids to nourishment and education. “I find they end up understanding why we paint the different colors on the hydrants, and end up explaining it to their parents, too.”

Painting hydrants helps educate the community about little things that matter. “The kids learn they are contributing to our firefighters’ safety and allowing us to be more effective at putting out fires.”