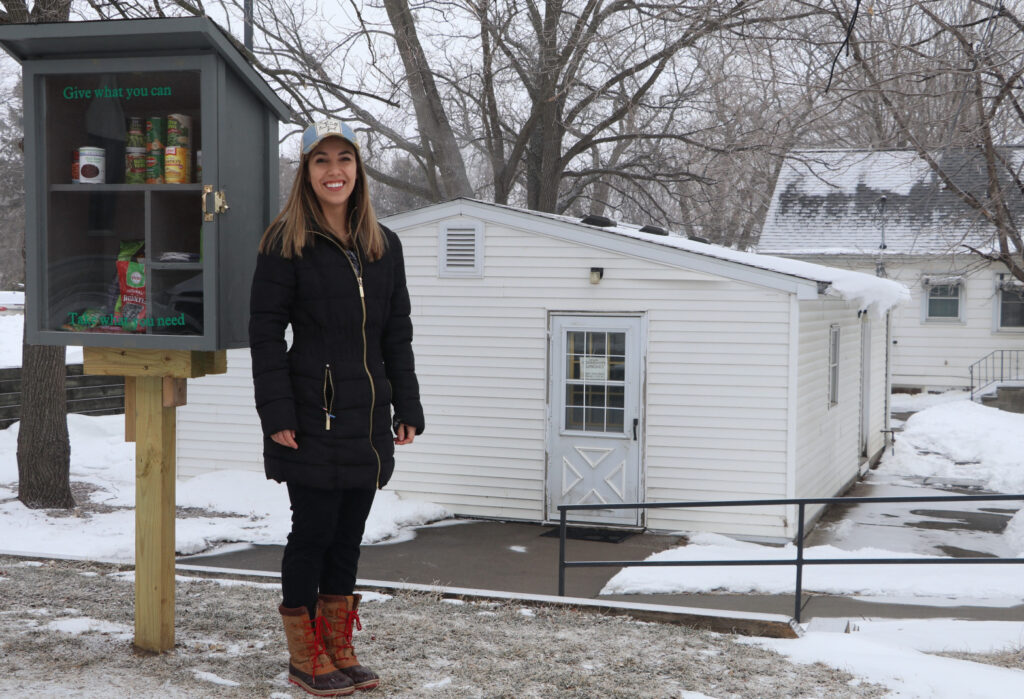 When Taylor Watson saw the story about Gil Petersen stepping down from his longtime post as director for the Nevada Community Cupboard, she felt called to the position.

“It seemed like the right opportunity at the right time,” said Watson, 28, a 2011 graduate of Nevada High School, who was raised near Gilbert.

To say directing the local food pantry is the right opportunity for Watson is an understatement. Once you get to know her, you realize the depth of Watson’s passion for helping others.

After high school, she studied sociology and political science at the University of Iowa to learn about and become active in social justice. She currently works full-time for the AIDS Healthcare Foundation.

“It’s hard to describe sometimes,” she said, “but I’ve always had a ‘service heart’ and believed in justice for people. I knew getting into sociology that the things I’d learn would be applicable to people’s everyday lives.”

But research wasn’t her true passion. “I wanted to be out in the community, and when the HIV-AIDS job came up … I seized the opportunity,” she said.

COVID has made her professional life more virtual in the past year, but the job she holds is filled with lobbying, advocating, and being in contact with people. She is excited to get back to doing more work in person, hopefully soon.

“I have the world’s most interesting job,” she said. During normal times she would be traveling to other states and Washington, D.C., talking with Representatives and Senators in Congress and with others about legislation and matters of importance for those living with AIDS.

“A lot of people living with HIV are forced into living below a livable income,” she explained. “They may have a decent paying job, but their insurance can’t cover the expensive medications, so they’re forced to live in poverty, because they can get more assistance.”

Watson said many people come into the circumstance of relying on local pantries and other community resources through situations that are no fault of their own. She could talk for hours, she noted, about the structural issues connected to social injustices. For now, however, she focused on how excited she is to be able to serve people in need here in Nevada.

Started at the end of December

Watson started her training with the local Community Cupboard on the last weekend of December. She worked with board members to learn about the local Cupboard and how it works.

“Personally, what really surprised me is the need … the real need in our community,” Watson said. “When you walk around the streets of Nevada, you don’t think about your neighbors who might need food or the children who get home from school and don’t have a lot to eat. It’s a real issue here.”

As she meets with people who utilize the Cupboard, she loves visiting with them and hearing their stories. “We have people struggling through Covid right now; people who have no stable work.”

She has set goals for herself as director of the Community Cupboard.

“On a personal level, it’s important for me to learn more skills,” she said.

From a community standpoint, “it’s important for me to know what’s really going on in my community and what resources are out there for people.”

She’s been introduced to United Way’s monthly meetings for the Story County Hunger Collaboration, and Watson said she and her Community Cupboard Board members have come to a mutual decision. “We want representation of the Nevada Community Cupboard at these monthly meetings.” Watson expects to be the primary person to attend but is grateful the board shares a commitment to this goal.

“Conquering hunger is about more than just giving food. It’s about helping people get the resources for their next job, or helping their children with their education needs. There’s a whole network out there that people may not know exists … I want to help connect people to all the resources available to them.”

Nominated when she was a college student for a Hawkeye Leadership Award for starting a club focused on community service work, Watson’s heart for helping people remains strong. She hopes to become more and more involved in Nevada.

One thing she’s ready to be involved with is the new Community Garden project, being led by City Councilman Luke Spence. “I’ve already talked with him about the plans and how we can utilize some of the vegetables to help feed people utilizing the Community Cupboard.”

Finally, she said, she has a goal of having people be familiar with the Community Cupboard in Nevada. She hopes to establish a social media presence for the Cupboard very soon, and through that presence, reach people who may not realize the Cupboard exists or how it can help them.

“I believe we can always find more people to serve.”