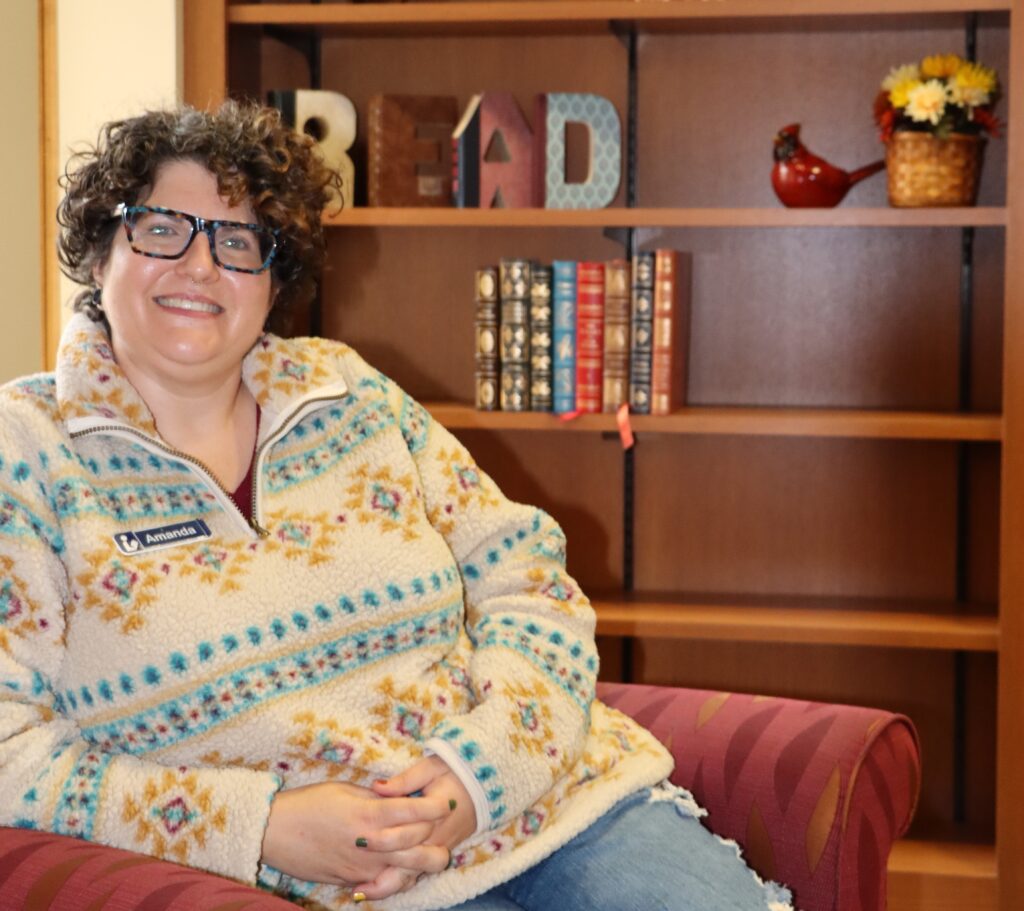 The Nevada Public Library has a new assistant library director with a familiar name.

Amanda Zagloba has taken the place of the previous assistant library director, Amanda Bellis, who left recently for a new career opportunity.

Zagloba has lived in many states during her lifetime of 40 years. “I grew up all over – Virginia, Massachusetts, Florida, Georgia, Arizona, Illinois.” However, she had never lived in Iowa, until she moved here in July with her boyfriend, Matthew Crain, who took a job with Iowa State University’s College of Design.

She had been working part-time as a receptionist at CyRide when she ran into Bellis at – where else? – a book club, the Between the Covers book club at Dog-Eared Books in Ames.

Bellis and Zagloba were sitting right next to each other, and Bellis told her about openings at the Nevada Library.

Zagloba had first applied for Linda Wright’s position, but was then asked if she’d consider the assistant library director position after Bellis announced plans to leave.

Zagloba comes to Nevada with outstanding credentials. She got her bachelor’s degree from Wesleyan College in Macon, Ga., where she studied studio arts. Her emphasis was in ceramic sculpture, but she also has a background in graphic design.

She decided to become a librarian during her last year at Wesleyan, and moved to Arizona to attend the University of Arizona in Tucson, eventually earning a Master’s of Library and Information Sciences.

Her first library job was in Tucson at the Pima County Public Library as a page, shelving books in the children’s room. Next, she moved to a library assistant position in one of the branch locations, and a year later, she started as a teen librarian.

She met Matthew while the Pima County Public Library employed them both. They moved to Chicago in 2014.

“In Chicago, I helped start up the teen media center at the Legler Library,” she said. Legler is one of Chicago’s 82 public libraries.

She worked at another Chicago branch library in adult services, before taking a position at the Harold Washington Library in downtown Chicago in the arts and music department. “I ran the ‘makers’ programming,” Zagloba said. “I taught a lot of classes, and we also had display space and would work with artists to arrange workshops with patrons. I scheduled outside presenters and also worked with the School of the Art Institute of Chicago’s Art Therapy Program.”

On Oct. 20, Zagloba started her work at the Nevada Public Library, bringing her big-city experience to small-town Iowa.

Her first impressions of the Nevada Public Library: “I really enjoy it! The staff is tight-knit; we’re a nice little family.”

Zagloba also likes the sense of community she now feels in Nevada. “I think sometimes small towns, when you’ve been in them a long time (she remembers living in some small towns when she was young), it’s actually nice. You do not really get to know people in the city. You do not have a lot of regulars (in the city). And the more you know about somebody, the more you can make good recommendations.”

Zagloba looks forward to getting to know Nevada Library patrons well and sharing her joy of crafts in the library programming.

“We did a ton of arts and crafts things when I was growing up,” she said. In addition, she learned sewing and all things craft-related – knitting, crocheting, cross-stitch – from her mother who made most of her own clothes. “She even made her own wedding dress,” Zagloba said.

Zagloba said she looks forward to moving the Strings and Things crafting group into the fireplace area of the library this winter. “I love this fireplace,” she said, as she sat near it.

Zagloba said she specialized in public libraries, knowing she did not want to work in any other kind of library. “I love the patrons … I love interacting with the public. I love helping people find what they’re looking for.”

Here are a few other interesting tidbits about Amanda Zagloba: