Paying Tribute on the 20th Anniversary of 9/11 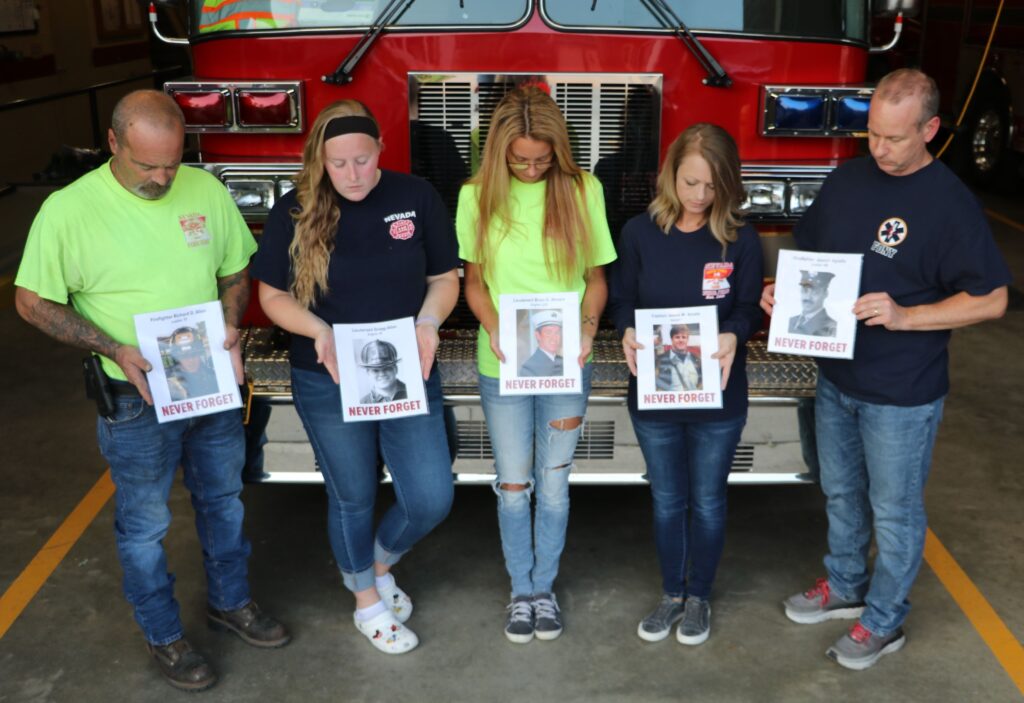 Members of the Nevada Fire Department hold a few of the photos of the 343 firefighters who were killed in the 9/11 tragedy. The public is invited to take part in two vigils on Saturday, Sept. 11, at the Nevada Fire Station. Both vigils will pay tribute to those who were lost 20 years ago.

In the coming week, America will observe the 20th anniversary of the 9/11 attacks on our country. Many of us will never forget the day a series of four coordinated terrorist attacks by airplane changed our lives forever. Two planes were flown into the twin towers of the World Trade Center in New York City; one plane hit the Pentagon near Washington, D.C.; one plane crashed in a field in Shanksville, Penn. Almost 3,000 people were killed that day.

Among the victims were firefighters and other emergency responders who bravely answered the call to save lives, even if it meant sacrificing their own.

This Saturday, the Nevada Fire Department is offering two opportunities for residents to pay tribute and reflect upon our country’s fallen heroes and all the lives lost that day.

The Department will hold a daytime vigil in front of the fire station (935 Lincoln Highway) from 7:45-9:10 a.m. This time frame is significant because 7:45 was the time when the first plane crashed into the North Tower of the World Trade Center and 9:10 is when the last plane hit the ground that day in Shanksville, Penn.

Saturday evening, also in front of the fire station, a lighted vigil will be held from 8:30-10:30 p.m. A piece of steel from the World Trade Center will be on display in front of the Department’s large American flag, which will serve as the backdrop for this solemn remembrance. The Department has also secured some beautiful red and blue lighting for the event, which is fitting for what should be a powerful moment for all patriots.

The Nevada Fire Department also recently received photo prints of the 343 firefighters and 72 law enforcement officers who lost their lives in the 9/11 tragedy. These photos will be on display during the vigil to allow those attending to put names with the faces of those who lost their lives while trying to save others’ lives.

The photos will also line the stairs of the department’s Climb For 9/11 event, being held on Friday (Sept. 10) at the Verbio plant’s tower at the west edge of Nevada. Climb For 9/11 is not open to the public. It is for registered firefighters/first responders and will feature a flyover by MercyOne Air Med. It is open to firefighters and emergency responders both in and outside of Nevada and has become a very special annual event for those who dedicate their lives to service.

Please remember our local firefighters and first responders as they take part in this year’s Climb for 9/11, and please join us to pay tribute at one or both of the vigils on Saturday.