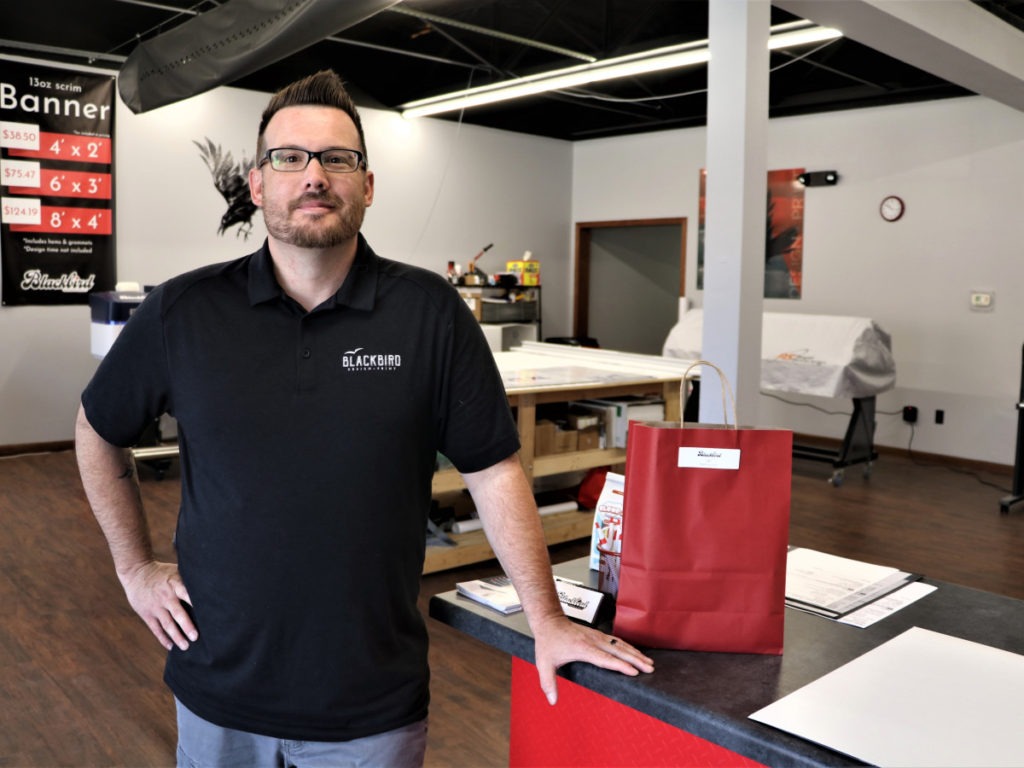 A year ago this month, Brandon Sills moved into a main street storefront in the 800 block of Sixth Street.

Taking over part of the multi-business center, which was in the not-too-distant past Smitty’s Grocery Store, Brandon has set up Blackbird Design & Print.

He chose Blackbird for his business because of the Beatles’ famous song lyrics: “Take these broken wings and learn to fly.”

“It’s been a journey,” Brandon said of all life’s twists and turns that finally brought him to the place he believes he was always meant to be.

After moving into his space at 835 Sixth St. (shown below), Brandon said he officially started conducting business in October of 2019. Blackbird Design & Print offers graphic design and printing services. Brandon has worked on web design; logo creation and branding; printing of business cards, flyers, booklets, and other marketing materials; and he’s done other types of graphic artwork, like animated videos.

The 1995 graduate of Ballard High School, who grew up and lived mostly in the Slater area, has always been an artist. But for quite a while after high school, “I really didn’t have a direction,” he admits.

He worked in construction and other jobs. Then finally, with his wife’s blessing, he went back to school. “I went to DMACC and got a degree in their ag program because this is Iowa,” he said. He was studying what he thought he should.

Not landing a job right away with that new two-year degree led him to enroll at Iowa State University and pursue a bachelor’s degree. “My wife, being the nice person she is, said, ‘All right. Do it.'”

He enrolled with the idea of continuing in ag studies. But before he was fully into the first semester, a feeling hit him.

“I was in the Memorial Union to go get something. I walked right past all the art supplies, and I just felt a major pull, because that’s what I love. I’d always been good at drawing and things of an artistic nature, but I’d gotten away from it.”

He pondered on the feeling, and not long after that headed to the design building to talk to someone.

With a wife and kids, he knew he couldn’t mess around forever going to school. Still, after talking about the possibilities of switching to a graphic design major, they worked out a way for him to get that degree in roughly half the time it would ordinarily take.

Brandon felt at home with the program and the other creative minds around him. He graduated with honors.

Out of school, he took a job for a printing business in Ames, where he learned how to run printing presses for both large and small format printing. He did a lot of work designing signs. But it still wasn’t enough.

“I just knew there was something more,” he said.

“So again, I went to my very amazing wife and said, ‘What if we did our own business?'” His amazing wife, Jennifer Sills, who works as a nurse practitioner for Iowa State University, was on board. Jennifer has been a critical part of helping Brandon get their business set up.

Brandon and Jennifer have two school-age children, Cooper, who will be in second grade this year, and Blake, who will be in first grade. They also have a 22-year-old son, Tre, who lives in Wichita, Kan., where he works as a youth pastor and at a bank.

The couple had moved to Nevada prior to opening their business here. “We picked Nevada (as a place to live) … and when the idea presented itself about this business, we talked about several places (in town) and felt this was a good location,” he said.

Brandon believes that creative professionals are needed more now than ever before. Not only because of the impact of social media on marketing but also because “people are busy. They don’t have time to design their own materials.”

Brandon loves that every Monday through Friday, he’s in his shop working on something new. He’s become a member of Main Street Nevada and looks to also become active with Rotary. He’s also excited for the time when Nevada’s ‘Main Street,’ now under construction, will open. “I’m excited to utilize the full downtown a little more,” he said.