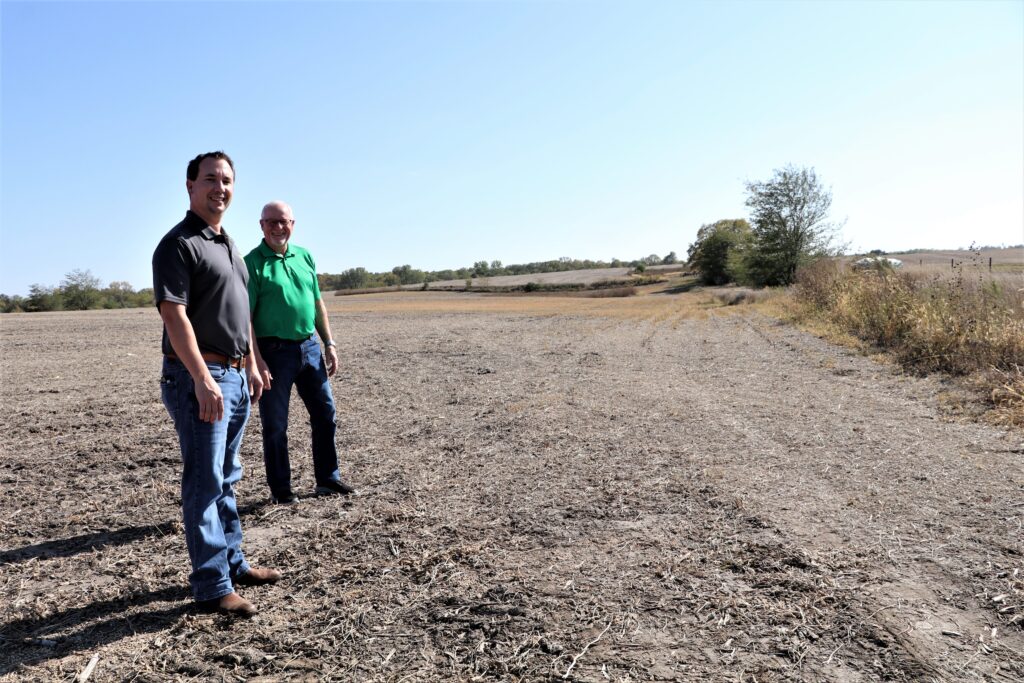 City Consulting Engineers Michael Roth (front) and Larry Stevens stand on the property, south of Nevada, where the city’s new Waste Water Treatment Facility will be built. The facility’s main structures will be so far back and downhill from where the two are standing that they won’t be visible to motorists.

Bids on Phase 1 of the city’s new Waste Water Treatment Facility were opened this afternoon. The city had favorable bids and a strong amount of interest in this phase of the project.

Two of the people present for the opening were Mike Roth and Larry Stevens, City consulting engineers with HR Green.

In the past year, Roth reported, the final design of the new Waste Water Treatment Facility has been underway and will be completed by November. Work on the facility will happen under two separate construction contracts and in three phases.

Plans to build this new Waste Water Treatment Facility for the City of Nevada have been discussed for years.

The new facility is needed for two main reasons:

1) Because of industrial expansion, including the recent Burke Corp. expansion in Nevada, and projected population growth.

2) To keep up with the latest treatment requirements and regulations.

“A combination of these things demand that capacity at the Nevada Waste Water Treatment Facility be expanded,” Roth said.

To allow for needed expansion, the new Waste Water Treatment Facility will be located outside of City limits, 3-and-a-half miles south of the current plant (located along the north side of Highway 30 just east of Sixth Street).

The current plant is the location where all sewer lines for the community intersect. Therefore, a pump station will be put in at that location to carry wastewater to the new treatment plant site.

Stevens regularly attends each council meeting and answers any questions that arise. Roth has attended a few meetings to go into more detail about the plant.

Last year, Roth explained to the Council how the new treatment process would work. It will use “activated sludge secondary treatment for nutrient removal and ultraviolet disinfection for effluent disinfection, while considering ease of operation and process reliability,” he explained.

Looking at population growth trends, which show Nevada growing at 0.75 percent annually, Nevada’s new Waste Water Treatment Facility is being planned for a 20-year design period, which shows the community growing to 8,800 people by 2044.

Construction on the wastewater treatment facility is anticipated to occur between July 2021 and November 2023, with start-up of the facility scheduled for November 2023.