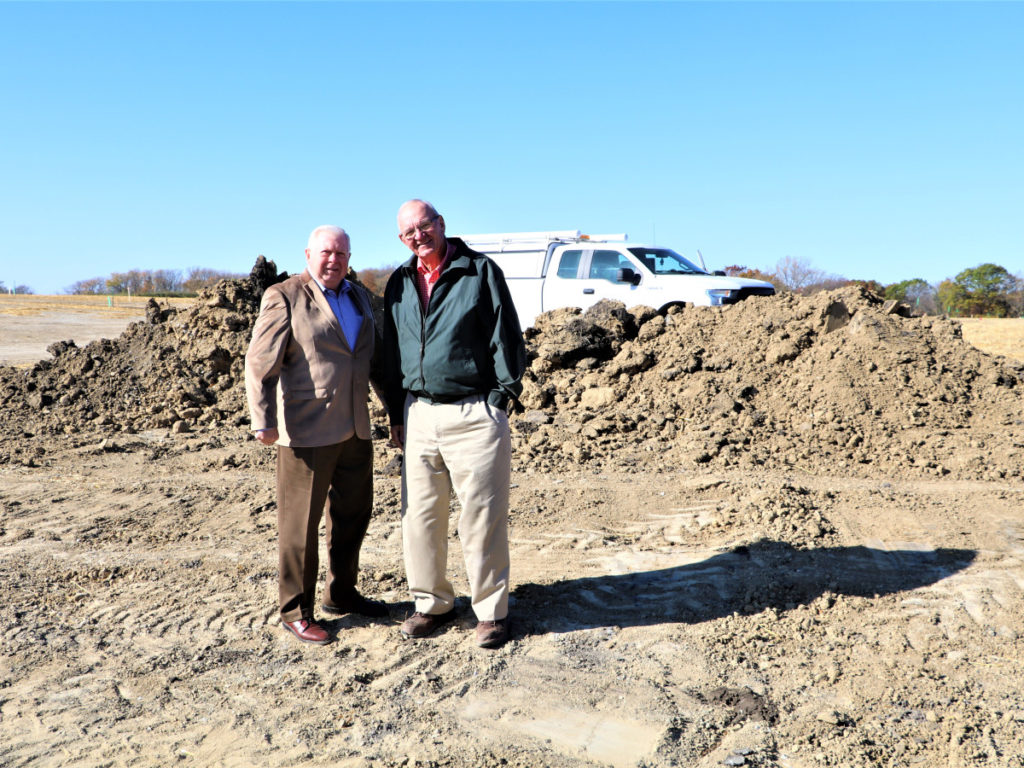 It was a moment to celebrate for two Nevada housing developers, Jim Frevert and Al Kockler.

Frevert, 82, and Kockler, 74, have been working for the past four years on plans for the South Glen Subdivision, located along the west side of 11th Street at the furthest southern point of the city limits. The ground for South Glen, which Frevert originally purchased from the Ivan Hansen Estate, was annexed into the Nevada city limits a couple of years ago.

Both men are grateful for where they are with the development today because, admittedly, the process has been challenging. Particularly challenging was working out the agreements needed between Central Iowa Rural Water and the City of Nevada to provide shared services to the area. They credit former Nevada city administrator Matt Mardesen for his work getting those agreements in place.

South Glen is a 38-acre parcel with 59 lots for middle- to high-end housing construction. The subdivision began taking shape this past June when dirt work started. The subdivision will be completed in two phases. Phase one will happen to the north with 26 lots.

“These lots will be a third of an acre to 1 acre,” Frevert explained. Both developers are excited about the north side’s lots, which will accommodate houses with walk-out basements.

The need for housing

Kockler said the main reason he got involved in housing stemmed from his service on the Nevada Economic Development Council. “I was on the NEDC for nine years and was president for two years. At almost every meeting, the topic of housing came up. We didn’t have any high-end lots for people to come in and build on.”

John Hall, executive director for the NEDC, confirmed Kockler’s comment. “For years, Nevada has struggled with many of its business leaders choosing to live outside of the city limits, limiting their ability to serve as crucial community leaders on boards, commissions, and the City Council,” he noted.

When Kockler heard about Frevert wanting to develop the land, “I asked if I could be included.”

Frevert said for years he drove by the land where South Glen is being developed on his way to and from Indian Creek Country Club. His wife Clare used to comment on how nice that land would be for a home.

In buying the Hansen Estate property, Frevert’s thoughts were on the city’s housing need. “We bought it strictly to help the city provide more housing.”

Frevert said he’ll be happy when he sees the result. “We just like to see Nevada keep growing. With all the economic development news, this housing is needed.”

Kockler has thought about their housing subdivision from the full Story County perspective. “I can’t think of a better location (for housing) than where we’re at in Story County. We’re a mile from Highway 30 … It’s easy on and easy off (the highway),” he said.

Frevert and Kockler also want to emphasize their use of local contractors, Con-Struct and OnTrack. “We know these companies employ many local people, and we wanted to support local workers,” Kockler said.

Also important to their project were three key people. They want to thank Scott Williams of Fox Engineering, Ryan Haaland of Davis Brown Law Firm, and Marc Olson of the Marc Olson Real Estate (M.O.R.E.) Team for their assistance.

Frevert and Kockler already have interest from individuals looking to build homes, which gives them hope their four years of working on this project and the money they’ve put into all the infrastructure will be worth it.

They hope to see street work completed on the property yet this fall. With streets, they both agree, it will be much easier for people to get an idea of how the lots will be laid out.

Both men have a long history in Nevada and know it’s a great community to raise a family and possibly retire. Both were also passionate about wanting to help Nevada grow and increase the city’s property tax base. These are reasons they hope to see the subdivision fill up over the coming years.

Hall adds another reason. “With the addition of this housing subdivision, more of our business leaders will have choices for appropriate housing within the community, allowing them to serve the community in an even broader capacity.”

Frevert is glad he and Kockler could give back to the community at a time in their lives when they have the financial resources to do so. “People now have more land available to make Nevada their home. We have a great city, a great school district and great opportunities.”

A little background on Frevert and Kockler

Jim Frevert came to Nevada in 1964 when he joined Hertz Farm Management as a farm manager. He worked his way up and became president of the business in 1988. In 2000, he helped bring in and train his successor and officially retired in the summer of 2003. Frevert and his wife, Clare, will celebrate 60 years of marriage this coming February. They raised a son, Larry, and a daughter, Anne, both Nevada High School graduates. The Freverts are grandparents of four and still own and manage a couple of farms. Jim also enjoys staying active with different organizations in the community.

Al Kockler came to Nevada in 1969 after serving in the United States Marine Corps. He started work in Nevada for an accountant, Dick Dale. Kockler bought Dale out in 1972 and still runs his accounting business, Allen L. Kockler Co., on Sixth Street in Nevada. He bought the building, which his firm is located in, from Roy Johnson in 1976. It was previously the Johnson Hardware store. Al and his wife, Kathy, live just south of the South Glen Subdivision property. Al raised three children – Diane, Alan, and Mike – in Nevada. He also has two step-children, David and Sarah, who graduated from Gilbert High School. Al and Kathy have nine grandchildren.