Reflecting on our Downtown Construction Project 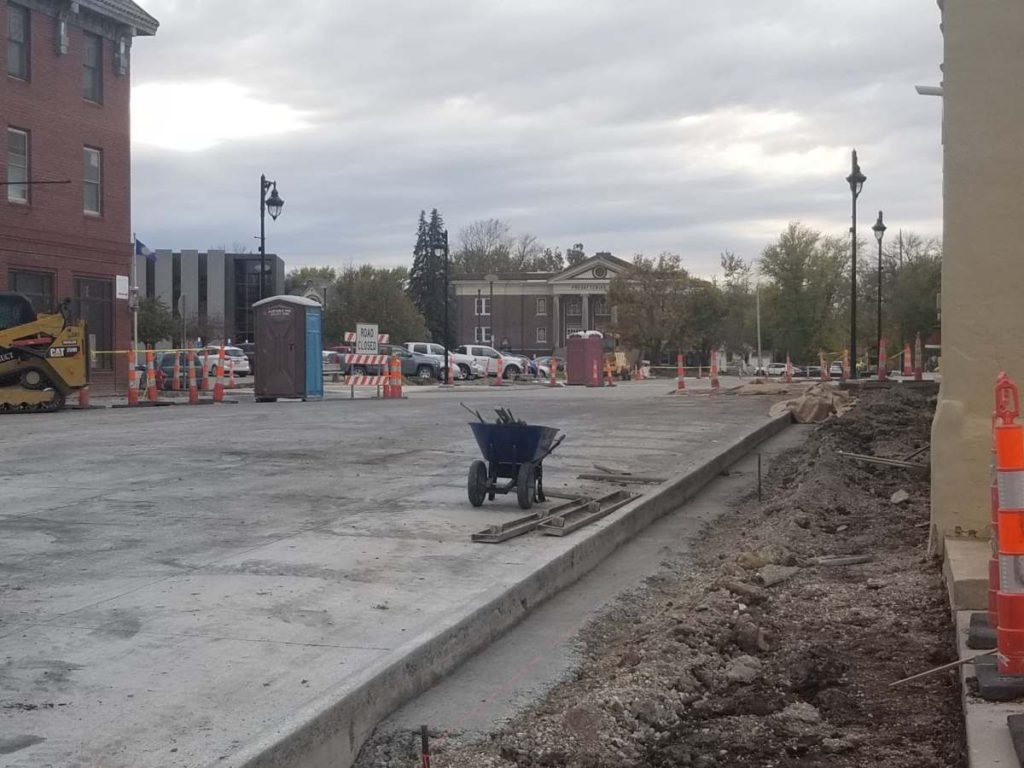 For the City of Nevada, 2020 has been a critical year for infrastructure work in our downtown.

Sixth Street is now open from I Avenue to Lincoln Highway, but the entire project is not complete. Here is a look at what work is still to happen this year and next.

The paving of J Avenue, from 5th to 6th and 6th to 7th, is finished. However, sidewalk work along this street continues.

“We are currently going back and pouring the sidewalks on the south side of J Avenue, east of Sixth Street, because this is where businesses are being interrupted. We’re trying to get those back in as soon as possible,” said Shawn Cole, Building and Zoning Administrator for the City of Nevada.

If not for the crazy, winter-like weather this past week, “we would have had most of the sidewalk work done this week,” Cole said. “Now we’ll wait to see where we are at after all the rain storms and everything else that’s forecast for this coming week.”

Rains may slow work down, but Cole believes they will complete sidewalks along J and the alley’s paving between I and J avenues, east of 6th Street this year.

It is next year’s work which will soon take center stage.

On the agenda is the paving and sidewalks along K Avenue between 5th and 7th Streets. That work, just like on J, will close intersections at 5th and 7th streets. However, it will not close 6th Street.

Sixth Street will be open from I to Lincoln Highway, but Cole said parking would be slightly different in 6th’s K to L block when construction starts next year. People will have to turn around and exit the block from the south because the Lincoln Highway, 6th Street intersection will be closed.

The Downtown Construction Project will proceed north on 6th Street in 2021 to M Avenue. It will include the same infrastructure work – replacing water, storm, and sewer lines, putting in new lights and sidewalks – as was completed south of Lincoln Highway this year.

“Bringing new sewer lines into all the buildings in the two blocks just south of Lincoln Highway probably added two months to the project this year. It’s work that takes a long time to do,” Cole said. “We don’t have near as many buildings and businesses to hook up north of Lincoln Highway, so the work along 6th should progress more quickly next year.”

Another question is about how the work next year, right in front of Nevada City Hall and Public Safety Facility, will impact people who need to drop off a water payment, or speak to the police or anyone else inside City Hall.

Taking in what has been accomplished

As he looks at the work completed on 6th Street south of Lincoln Highway, which was the most time-intensive part of the entire project, Cole said it’s been rewarding.

“It really was a lot of work, a lot of worry about how things would work or wouldn’t work, so it’s nice to see it all come together,” Cole said.

“Our engineers had a good plan. OnTrack and Construct (Inc.) did good work and were cooperative. The building and business owners were great to work with. And I want to thank Henry Corbin at Main Street Nevada for helping us keep the downtown community informed,” Cole said.

As people can now see what the finished product looks like, Cole believes many will take pride in the renovated downtown area. “It’s hard to see things off of a paper or a plan. Now that they can experience it, that makes all the difference.”