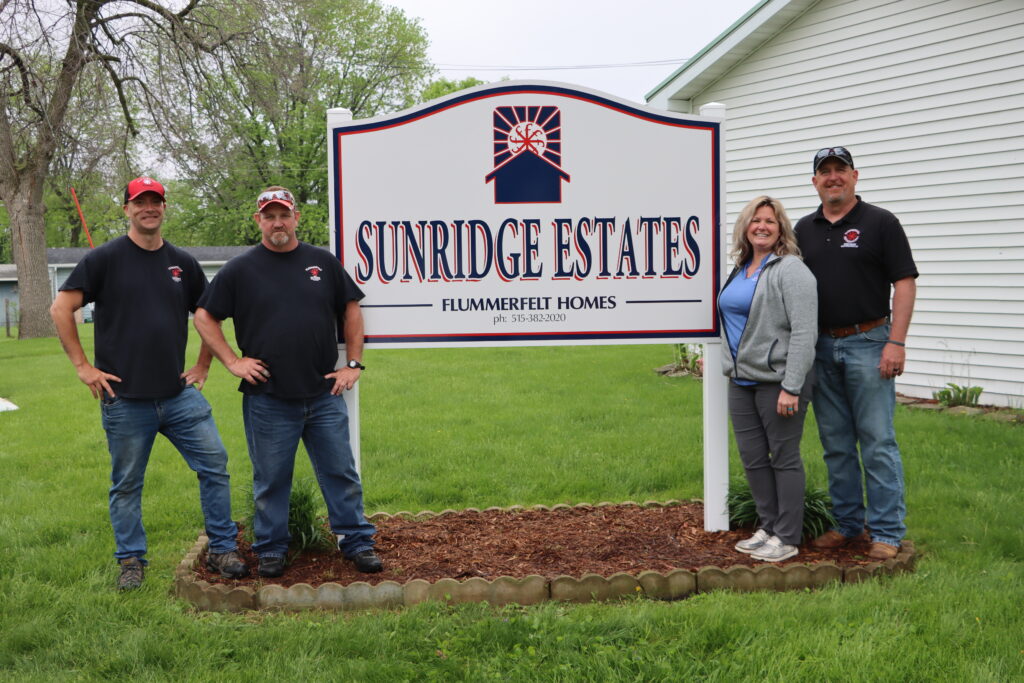 For 30 years, Mike Flummerfelt has been opening new doors to manufactured home living in Nevada, Iowa.

This month – May 2 to be exact — Mike expanded his operations in Nevada when Flummerfelt Homes became the owner of Homeacres Mobile Home Court along 10th Street. The manufactured homes community has been renamed Sunridge Estates.

With his latest purchase, Mike Flummerfelt, who has been in business in Story County since 1984, now owns all four Nevada manufactured homes communities. In addition to Sunridge Estates, there are:

The four Nevada communities are part of Flummerfelt Home’s nine communities in Central Iowa. Flummerfelt’s main offices and sales site are located in Nevada at 837 Maple Street, south of Highway 30.

Flummerfelt and his Nevada team appeared before the Nevada City Council at the regular May 9 council meeting to talk about the latest purchase. “We’d been in conversations (with the previous owner) for a few years,” Flummerfelt said. He said the park had been part of a family ownership situation, and finally, this year, the family was ready to sell.

The first item of business for Flummerfelt’s team was to fill in major potholes and cracks in the roads inside the community. “Day one, we brought in five large loads of rock,” he said. “And people have been very appreciative of that.” Along with new rock on the roads, Flummerfelt Homes set up two commercial-sized dumpsters and encouraged people to begin cleaning up their lots and surrounding areas; and a tree service began removing overgrown and unsightly trees.

The rock, dumpsters and tree removals are just the beginning.

Those who know Mike Flummerfelt know that he is not afraid of making drastic improvements to be certain his manufactured homes communities are presentable and respected parts of the community at-large. And, plainly put, “Homeacres was in disrepair,” he said.

Nevada City Administrator Jordan Cook said Mike Flummerfelt has flipped the narrative on mobile home parks. “He has made these areas beautiful places with beautiful homes, which adds value to these neighborhoods and to the entire community,” Cook said.

Mike said his team is very excited about the project, and he believes many of the people living at Sunridge Estates are happy to see change. “I don’t want to use the word overwhelming, but it’s been overwhelming the positive response we have gotten from many of the residents. There are a lot of really nice people who live there. We’ve met them,” he said.

Flummerfelt said his team will be very visible in the community, especially during this time of clean up. “We want to be sure we’re constantly trending in the right direction, and I think we are,” he said, reflecting on their first weeks of ownership.

“Our first goal,” he said, “is to work through legally demolishing and removing approximately 19 abandoned homes. That’s goal number 1.”

The process of being able to remove the abandoned homes is easy with some and has a few more steps with others.

“A few previous owners had the title to these homes, and some have been passed on to me. On those, I can start an immediate process of asbestos abatement and demolition,” he said.

“But, there are a few abandoned homes that the previous owner did nothing with, so I don’t own them, and I have to go through a process at the state and county level. We deem them abandoned, and then we work through the process to declare them ‘valueless,’ which means the home is worth less than the cost of demolition and the back lot rent,” he explained. Once they’re deemed ‘valueless,’ we can work on removing them.” He predicted the process will take a few months.

The second goal, Mike said, is to get to know the people and introduce them to his community standards. “We’ve sent everyone packets with a lease, our community policies and other information. We’ve also started from scratch to develop a tenant registry.”

It goes without saying that improving the community comes with a price. For homeowners at Sunridge Estates that price is a $50 per month increase on their lot rent, which Flummerfelt described as previously being “way under value” for the marketplace. Another change that will soon happen is having individual city utility services for each home.

Flummerfelt knows from experience that implementing rules — outlined clearly in his ‘community policies document’ — into a community that didn’t have many or any rules can be hard for some residents.

“Those who don’t want to be (in our community), we understand. Our communities are not for everybody. We want to attract a certain behavior,” he said.

“There are three things I tell people when they say, ‘Wow, you’ve got a lot of community policies.’ I tell them that all these policies wrap around three basic concepts of living: 1) Pay your bill on time; 2) Take pride in your home. Mow, trim, don’t have junk laying around…; and 3) Respect your neighbors. You do these three things, and we will get along great.”

The layout of Sunridge Estates

Currently, Sunridge Estates has about 105 lots, but Flummerfelt Homes plans to re-divide some of the property. “We’re going to take some of the smaller lots and combine them together to give people a nicer lot,” he said.

Flummerfelt Homes also purchased the 30 acres straight east of the present area and has a goal of expanding Sunridge Estates onto this 30 acres in the future.

Any time you take on an existing mobile home park, you don’t know exactly what to expect. But, Mike said, “I wasn’t afraid of the challenge. I’ve purchased other challenging properties, like my first in Nevada – Gaslite Village. I don’t have a problem knocking on anyone’s door.”

Flummerfelt’s Nevada team, made up of about four office staff and several seasonal employees, has enjoyed its first few weeks of being out in the neighborhood. It is important to Mike that the residents of Sunridge Estates see his team. “They need to see us, and know that we’re people too, and we just want to do the best we can for them. I’ve always said to my staff, if you don’t know what else to do, focus on ‘quality.’ Because if we focus on quality, then good things are going to happen. We might take a few steps backward and have a few vacant lots for a while, but we have to create a quality environment for those who want to live here.”

Mike describes manufactured homes living as “the quintessential affordable quality home ownership. You can walk into your own house, hang a picture where you want, sit in your own kitchen, have your own lawn and your own private parking. It’s your home. A lot of people wouldn’t be able to be a homeowner if they didn’t have this opportunity.”

Flummerfelt describes Nevada as being a business-friendly community with leadership that accepts and appreciates the need for affordable housing.

“I think they view us as one of the solutions for affordable housing in Nevada,” he said, and he’s glad City leaders appreciate his vision of how manufactured homes communities should look.

“If we can do this (manage respectful and presentable manufactured home communities), why don’t we do more of this?,” Mike asks, “and keep people living in Nevada that might not otherwise be able to live here.”