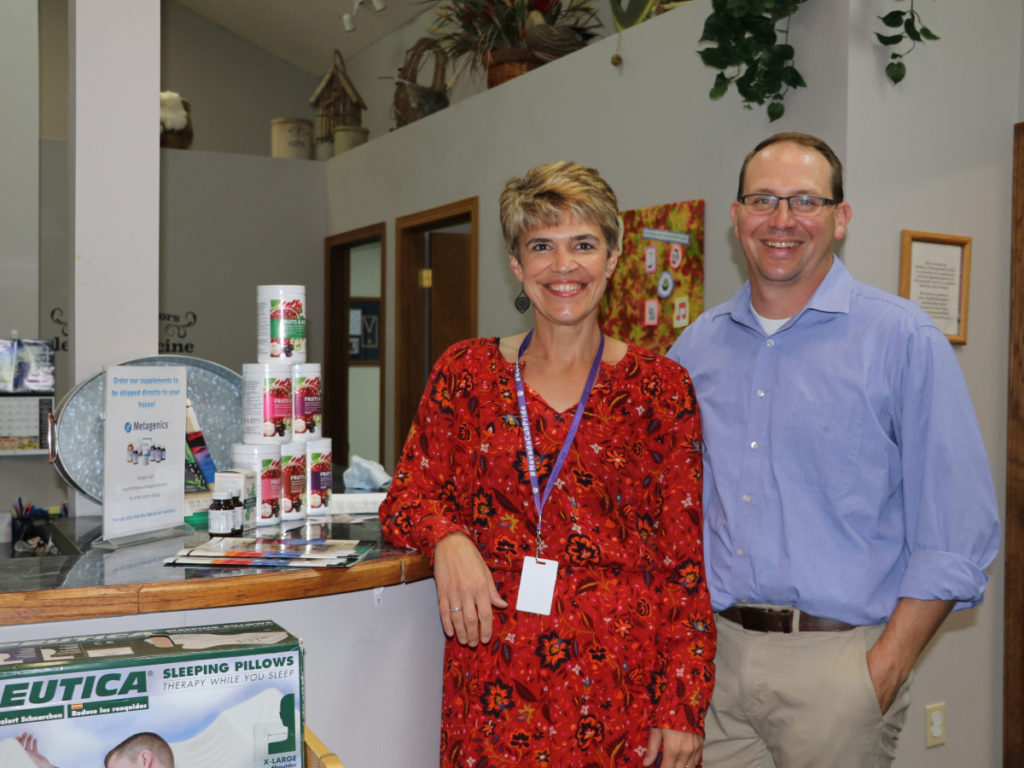 Looking back on the past 20 years, Meg and Mark Frideres can say, without hesitation, Nevada was a great choice as the community where they would start a business and make their home.

In 2000 Mark opened his practice, Frideres Chiropractic Clinic, along South G Avenue. The clinic still operates at its original location, though the suite is bigger now than when the practice began.

“We were renting from Larry Krupp with about half this space,” said Mark, as he and Meg sat side-by-side to reflect on their 20th business anniversary in a year that also marks their 25th wedding anniversary.

They had plans for big celebrations of both events this year, if not for COVID-19. Along with a wedding anniversary trip, they’ve now postponed, “we wanted to have a grand re-opening of the clinic,” Mark said. “Maybe that will be a 21st year celebration.”

As usual, when talking with the Frideres, they look at every situation as one where the glass is “half full” as opposed to “half empty.” The two are grateful for the blessings they have in life.

Since 2000, they’ve been blessed with three beautiful children. Elliot, 17, is now a senior at Nevada High School, and Nick, 15, is a sophomore. Both boys are runners. Lilly, 12, is a seventh-grader who enjoys volleyball and dance.

Meg, who worked with Mark at the clinic the first year they were in business and also did some substitute teaching with her degree in education, was blessed to be hired by the Nevada Schools as a full-time teacher in 2001. She also feels blessed to be back in the classroom, after so many months away from school this year.

Some of the time away from school, Meg was able to help Mark at the clinic. “We were between hiring another employee when COVID hit,” Mark explained, “so Meg has been helping here some of the time when she wasn’t at school.” The two laugh because it felt a little reminiscent of their first year in business, and still, Mark knew how much Meg would rather be back with her students.

When Nevada Schools made the decision to return to on-site learning, “I felt so happy for her,” Mark said. “I can’t imagine not adjusting a patient for six months, so I knew how hard it was for her.”

Mark did have his fears when the pandemic began, he admitted. “I would say that truthfully, about a week-and-a-half into COVID, I thought I’d have to fold my practice that I’d spent 20 years building.” He was in full “panic mode,” the two agreed.

“But then, people needed care and they found out we were following all the safety protocols,” Meg said. “And now, Mark’s on the other end, having to work extra hours.”

A successful practice fits the dream Mark and Meg had when they thoughtfully selected Nevada as their home. Both natives of small-town Iowa (Mark from Madrid and Meg from Victor), they wanted a place where Mark could establish himself as a small-town doctor. “The thing I always wanted was for my patients to feel listened to,” he said.

In choosing communities, they didn’t think about Nevada at first. But, Mark happened to stop in Nevada one day and make a few inquiries. He soon called Meg, who was in her first teaching position at Assumption High School.

“He said, ‘I think you need to take a personal day, because I’ve found it,'” Meg recalled.

“I remembered playing soccer in Nevada and going to Hardees afterward,” Mark said.

Mark and Meg still remember the people who welcomed them and encouraged them to consider making Nevada their business and family home. “LaVon Schiltz was the chamber director at the time,” Mark said.

LaVon made time to show them around and make introductions. They met Bernie Stephenson, a local and newer dentist in the community at the time. “He talked to me about running a practice in this town,” Mark said. They also met Harold Hulleman, who was Nevada Superintendent of Schools at the time.

“I remember LaVon saying, ‘What else do you need to know that would bring you here?,'” Mark recalled. “It was one of the coolest things to realize that people wanted you to succeed, because they wanted what was best for their community.”

The things they saw that day brought them here. They’ve seen great things since. The couple has been involved in their community over the years. Mark served as a chamber president for a time, both were active with Kiwanis, Mark worked with the local Scouts program, and both are active in St. Patrick’s Catholic Church. As parents, they are now very involved with school events and programs.

“I’m super proud of our school district,” Mark said. “It has a lot of things going for it. It’s so progressive in its thought processes, always searching for the next thing to make education better for its students. I’m so glad Meg has gotten to be a part of it.”

Mark said he’s witnessed how hard the teachers in Nevada worked over the quarantine and through the summer to get their students back to school.

Meg can attest to it. “Many of us veteran teachers have said, ‘This is as hard as the first year we taught, and even harder with the emotional toll of it,'” she said.

With 20 years in, the Frideres still look to the future and its opportunities.

Meg plans to graduate from teaching when their youngest Lilly graduates from high school. “My other area is pastoral ministry,” Meg said. She would like to spend time in that field and provide pastoral care.

Mark has hopes one of his children will join his practice and take it over someday. He plans to continue being a doctor for as long as he’s able. “I’d like to practice, in some capacity, until I don’t have the faculties to do it anymore.”

Like Meg, Mark also looks forward to continuing a ministry passion – prison ministry. He hasn’t been able to do this during COVID, but he’ll go back to it through Catholic Charities as soon as it’s allowed again.

Meg said both she and Mark want the community to know the sense of gratitude they feel as they celebrate 20 years in Nevada.

“We feel gratitude for the patrons of our business, and for the other businesses in the community that have supported us… This was a dream 20 years ago, and the dream has been a reality for a long time now. When you start a business from scratch in a town where you know no one, it’s a huge risk. We are just so grateful for the people who’ve cross our path.”