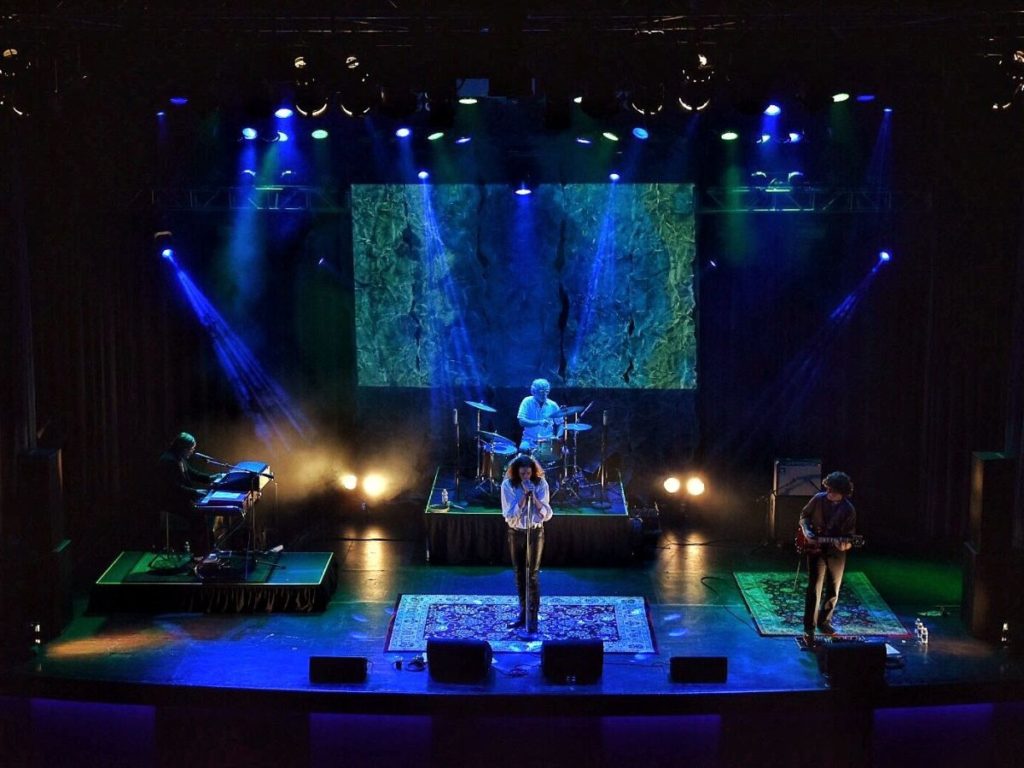 It was the year the mini-skirt appeared in London, the year Dr. Martin Luther King led his civil rights march from Selma to Montgomery, Alabama, and the year Iowa was part of a deadly Palm Sunday tornado outbreak on April 13.

1965 was also the year The Doors, an American rock band, formed in Los Angeles, broke onto the scene, and eventually brought forth hits like “Light My Fire,” “Love Me Two Times,” and “People Are Strange.”

On Friday, October 2, you can take yourself back to the late ’60s, because The Doors’ music will be front and center on the stage of Nevada’s Talent Factory. Tribute band, Mr. Mojo Risin’, comes to town for a 7 p.m. show.

“We love playing The Talent Factory,” said Mark Peden, keyboardist and bass player for the tribute band. He said this would be the band’s third visit to Nevada. “There is so much theatre around the music of The Doors, that a place like The Talent Factory, with its history and awesome atmosphere, really makes the shows better.”

Talent Factory owner Larry Sloan said about Mr. Mojo Risin’, “When we book tribute bands, we look for authentic sounds and appearances. These guys have got it all. From the authentic reproduction of the music, to the stage presence of Jim Morrison, they are true to the originals.”

Sloan continued, “The Doors were an incredible group of musicians and performers and Mr. Mojo Risin’ is spot on.”

People who come to the show will experience much of what was experienced from 1965 to 1970 when The Doors performed. “The Doors were much more than a studio band. They excelled at playing live and created a unique ‘experience’ with every show,” Peden said. “We try to bring as much as we can (of the original Doors’ experience’) to provide audiences what it may have been like to see The Doors in their peak.”

Peden described the Doors had “high-energy music, unpredictable sets and improvisations that made their music unique.”

Kellen Potter, the lead singer for Mr. Mojo Risin’, has the task of bringing Jim Morrison (Doors lead) to the stage. Peden said Potter does an amazing job. “When I first saw him (Potter) singing … it was like Jim Morrison was back!”

Potter, of Kansas City, and Peden, of Paola, Kan., were in another Doors tribute band before joining Mr. Mojo Risin’. Peden has been playing in bands since his college years.

“I’ve always been a huge Doors fan, and have included Doors’ songs in the sets I’ve played in almost every band I’ve been in,” he said. “Being in Mr. Mojo Risin’ has given me the opportunity to play, not just the hits, but to learn songs deep in the Doors’ catalog.”

Potter and Peden are joined by Dave Stahly of Overland Park, Kan., and Colby Earleywine of Lawrence, Kan.

Peden credits Stahly, guitarist, for a great mix of studio and live solos that make you believe you hear Robby Krieger of the Doors.

Earleywine, Peden said of the band’s drummer, is a great interpreter. “John Densmore (of The Doors) was a jazz drummer originally, and also incorporated multiple music styles in the Doors’ rhythms. Colby is able to bring that variety into his interpretation of the music.”

Mr. Mojo Risin’ will bring many favorite Doors’ songs to the upcoming performance. “Our audiences enjoy The Doors’ many hits. Peace Frog is a top song request.”

However, Peden said, fans often request more album songs, such as The Soft Parade or 20th Century Fox. “We are always continuing to learn new songs, and it is cool to surprise the audience with a favorite track.”

Being part of a Doors tribute band, Peden described, is being part of “an amazing jam band, where many songs were never played the same. Each musician feeds off the others to improvise and change songs as they play them. We love this aspect of their music and enjoy the improvisational side to their music. We set up in the same manner of the Doors, with a fairly tight footprint, so we can keep good eye contact with each other while we play. We have listened to multiple versions of each song to help understand how The Doors played and changed the songs when they played live.”

One of the band’s favorite songs to play is “The End,” an 11-minute tune that appeared as the last song on The Doors’ first album. “The song has multiple quiet parts, then builds up and down. It is an amazing song to play and really allows us to perform as one band.”

To be sure you don’t miss the opportunity relive or get to know The Doors music, call The Talent Factory, 515-382-0085, or use the event link at this website page: https://www.iowatalentfactory.com/mr.-mojo-risin-.html to reserve your ticket. The cost of tickets is $15 or $20, depending on your seat, and advance reservations are important to assure the show will happen.

Most exciting about upcoming shows for Sloan is The Talent Factory’s new projector and the new additions to its sound system. “The sound system allows the audience to ‘feel’ the sound.”