Nevada Police Officers in the News 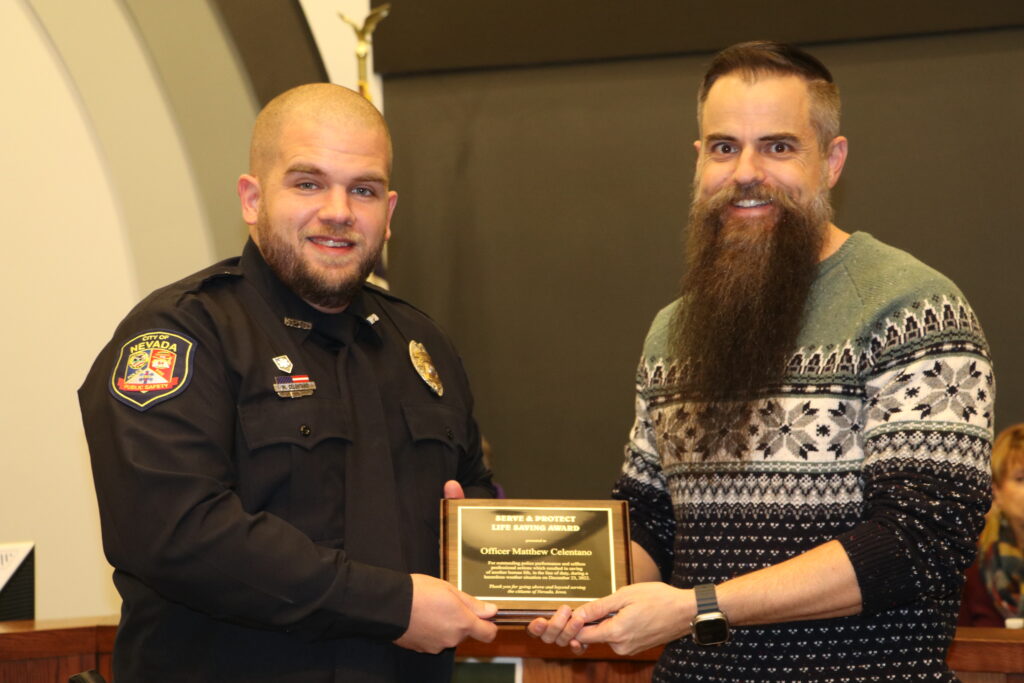 Nevada Police Officer Matt Celentano was presented with a Life Saving Award from the Nevada Public Safety Department during the regular City Council Meeting on January 23, 2023. The award was given for his efforts to save a stranded motorist on Friday, Dec. 23, during blizzard conditions and below-zero windchills.
With Sheriff’s deputies busy on other calls, Celentano was dispatched to help a stranded motorist southeast of Nevada, near 250th and 650th.
Due to drifting, Celentano got his vehicle as close to the motorist’s vehicle as he could, but that was still about 25 feet, he estimated. He got out of his patrol car and made his way to the motorist, an elderly man, whose vehicle had bottomed out in a drift.
As Celentano approached the stranded vehicle, the first thing he noticed about the victim was that he had no gloves, so, during the course of the rescue, he gave his own gloves to the man.
Celentano admitted he had no idea how hard it would be to get the victim back to his car. “About halfway back, the victim collapsed,” Celentano said, and at one point, even Celentano lost his footing from trying to walk through the drifting snow and strong winds. “The snow, the winds and the very cold temperatures really drained my energy,” he admitted.
As they got closer to the patrol vehicle, Celentano threw off the heaviness of his vest and got the relief he needed to get the victim into the patrol car.
With the victim having chest pains, Celentano immediately transported him to Story County Medical Center, where both of them received attention and were eventually released. Celentano’s fingertips were “burning” from the cold, but that sensation only lasted until the following day.
“We here in Nevada are fortunate to have Officer Celentano provide service to our community,” said Nevada Director of Public Safety and Police Chief Ricardo Martinez II. “Recently, I read a quote from the International Chiefs of Police Association, which I attribute to all of Law Enforcement. Officer Celentano exemplifies these words: ‘Police officers take risks and secure the safety of fellow citizens, and they endure such risks and tolerate such inconveniences on behalf of strangers. Consequently, police work is one of the more noble and selfless occupations in society. Making a difference in the quality of life is an opportunity that policing provides, and few other professions can offer.’”

See video of the rescue at this link

Unrelated to the Life Saving Award, Police Officer Matt Celentano was recently promoted to Detective. Over the coming weeks, Celentano will train with Detective Sgt. Andrew Henderson, who is transitioning to take on more administrative tasks with the department. 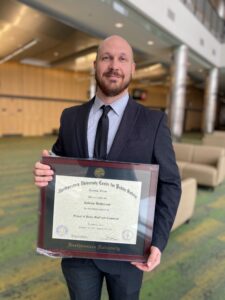