Nevada’s disc golf course has stood the test of time 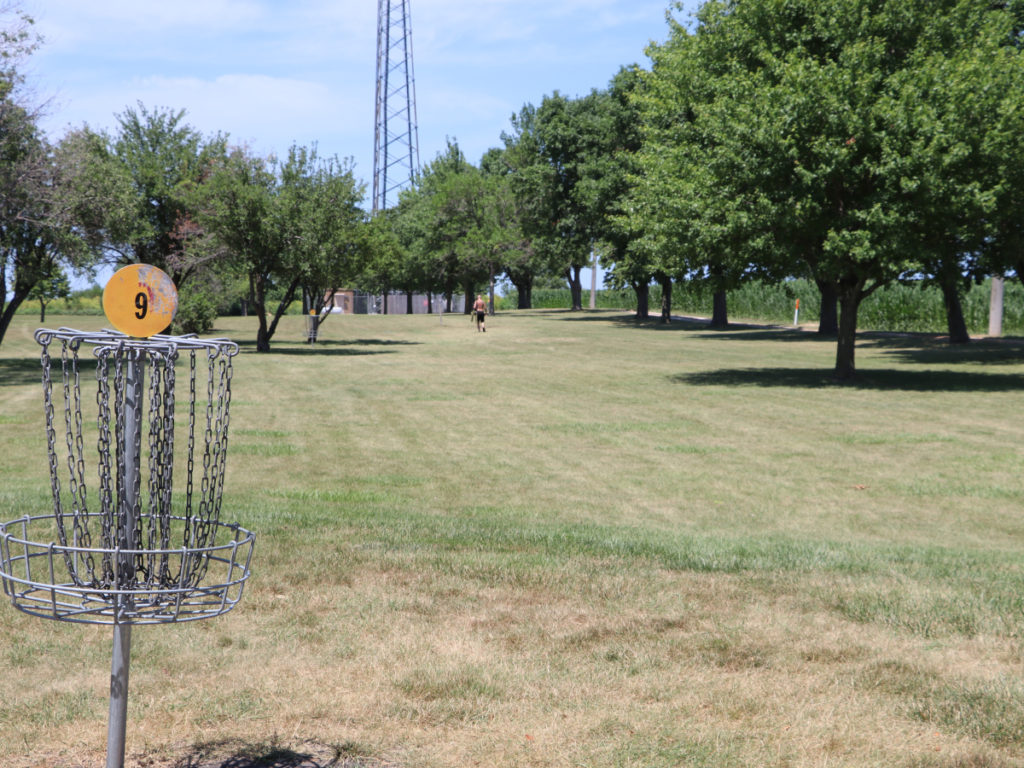 Twenty years ago, a Project Mainstreet Grant, awarded by KCCI-TV, Casey’s General Stores, and Pepsi, made a new recreational opportunity possible in Nevada.

Today, that recreational activity – disc golf – is still available on the 9-hole course located on the east side of Harrington Park.

“People are out there a lot; the course is used regularly,” said Nevada’s Director of Parks & Recreation Tim Hansen, who held his position back in 2000 when the grant was received.
From school PE classes to the community’s kids and adults, disc golf is a reasonably economical activity that many can enjoy.

Chris Andersen, 50, of Nevada said he first started using the course in 2016.
From late spring through early fall, Andersen, his wife, and their son are usually at the course about once a month. Andersen, who is 90 percent furloughed from work at this time, said he now goes out more frequently. Sometimes his dog tags along.

“Do you know how hard it is to get a dog to ‘stay’ when discs are being thrown?,” he jokingly asked.

Andersen likes that the Nevada course is “forgiving.”

“With the exception of number 3 and number 5 with the foliage and the train tracks, it’s difficult to lose a disc.” Trees do offer a challenge in some fairways, and hole number 7 is “a monster of a long hole compared to the other holes on the course,” Andersen said. But Nevada’s course is “exponentially less stressful than either of the Ames courses. Those have you in and out of trees and require some real pinpoint accuracy.”

Chelsea Shimp agrees with Andersen about the difference in courses. Ames is excellent for experienced golfers wanting a challenge. Nevada is great for beginners, she contends.

Shimp and her husband moved to Nevada three years ago but started using Nevada’s course just a few months ago. They’d tried it in Ames but found it too challenging for their newbie skill level.

Shimp’s brother suggested they try the Nevada course. “We are really enjoying [it]. It’s a great beginning course. We go a couple of times a week now, some weeks almost every day.”

When questions were asked recently on Facebook about Nevada’s disc golf course, Shimp commented, sharing a little bit about Nevada’s course and how she’s learned more about the sport by watching YouTube videos.

“I’m learning so much,” Shimp said. “For example, there are like six different techniques that you can use to throw the discs. We are doing fairly well at two of them. I was trying to throw them like frisbees, and that is apparently wrong.”

She also noted there are many discs you can buy, but starting with a couple of decent discs will work.

On Nevada’s course, Shimp likes hole number 8 best, “now that somebody clued us in as to where the tee pad is.”

Shimp also noted she’s excited to hear people saying that Nevada’s course is going to get a facelift.

According to Hansen, what she’s heard is correct. He doesn’t offer an exact timeline, but Parks & Recreation does have the disc course on its project list.

“We want to redo some signage for the holes. We’d like to have some bigger, bolder hole numbers (on the signs). We’d also like to put in concrete pads,” Hansen said.

Looking back 20 years ago, Brian Vanderwahl, a local disc golf enthusiast, and the Nevada FFA Chapter helped Parks & Rec with the course design and with setting up the tees and goals.

To see Nevada’s course stand the test of time is a great accomplishment for the community and for the organizations – KCCI, Casey’s and Pepsi — that funded the original $3,000 grant.

“We certainly thanked them at the time (back in 2000),” Hansen said, “but we thank them again now for providing the funding that made this longstanding recreational opportunity available in Nevada.”