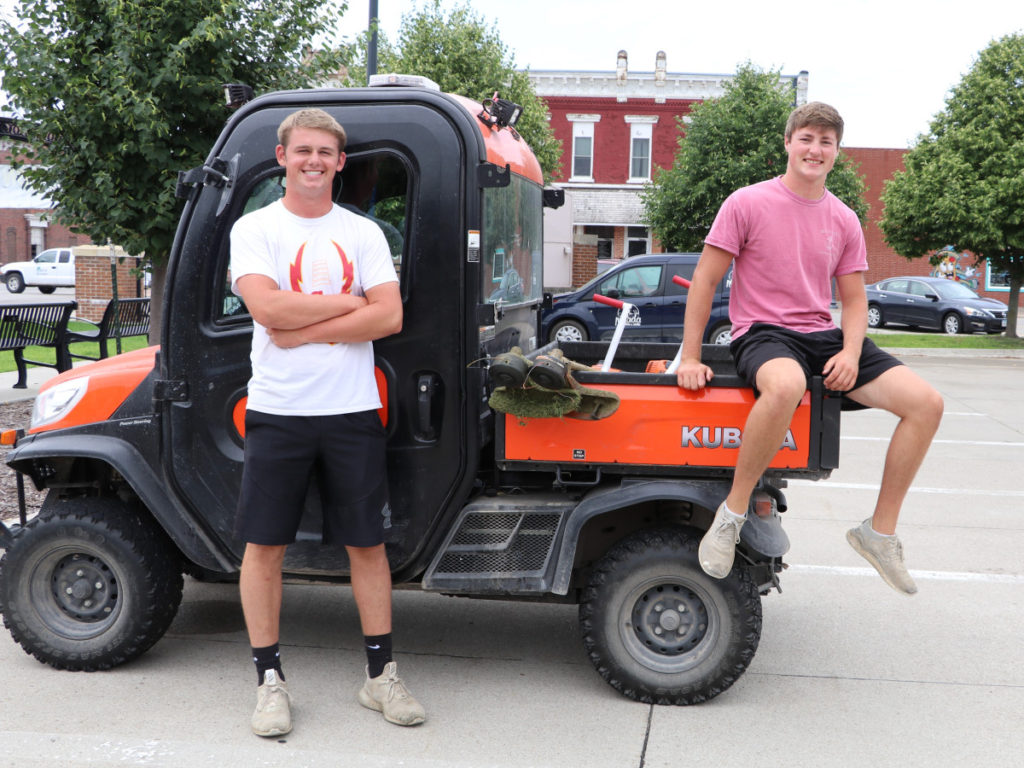 In a typical year, the City of Nevada’s Parks & Rec Department would employ four to five seasonal workers (from end of May to mid-August). These workers become very important in various summer tasks, especially prepping and maintaining ballfields during the many weekend tournaments hosted at SCORE.

Jack, 19, is in his fourth year of seasonal service during his summer break from Iowa State University, where he is studying finance and business analytics. Jack looks to get into equity research and quantitative data for a future career in the “financial world.”

Jack belongs to the FarmHouse Fraternity at ISU, where he is part of the university’s investment group/equity fund and participates in intramural football and basketball.

Sam, 19, is back for his second year of seasonal service during his summer break from the University of Iowa, where he studies exercise science and pre-physical therapy.

“I don’t know if I want to be more of an athletic trainer or physical therapist,” he said, but anticipates his future career will be in one of these areas.

Sam is part of the U of I physical therapy club and participates in intramural football and basketball.

Both Jack and Sam say, working in their hometown over the summer is enjoyable. They have kept busy this year by preparing the high school baseball diamond and the fields at SCORE for tournaments. They also do weed eating, collect trash from all the park receptacles, mow, and do other chores. For both, their favorite part of the job is mowing.

Covid-19 made this summer different than past summers on the job. “Early in the summer, we had to ride separately in vehicles to locations,” Sam said. Jack added, “We had more basic cleaning procedures to do this year around the parks and the shop area. We also would have had a lot more tournaments to prepare for if it were a normal year.”

Whether they will apply for future seasonal work with Nevada Parks & Rec, neither can say right now. It depends on when and what opportunities might come along for internships in their area of study.

Both of these young men will soon head back for their sophomore year of college, which will look a little different.

At U of I, Sam said, “our smaller classes will be in-person, but lectures and any class over 50 people will be online.” U of I students will be on campus until Thanksgiving, and between Thanksgiving and winter break, they’ll have remote classes only.

Cahill said at ISU, “we’re starting a week earlier on Aug. 17, and our first term will end right before Thanksgiving, on Nov. 25.”

We wish both of these young men good luck with their upcoming year of college, and we thank them for their service to the City of Nevada.