Nevada’s Santa and Mrs. Claus find ‘kindness’ in a different type of year 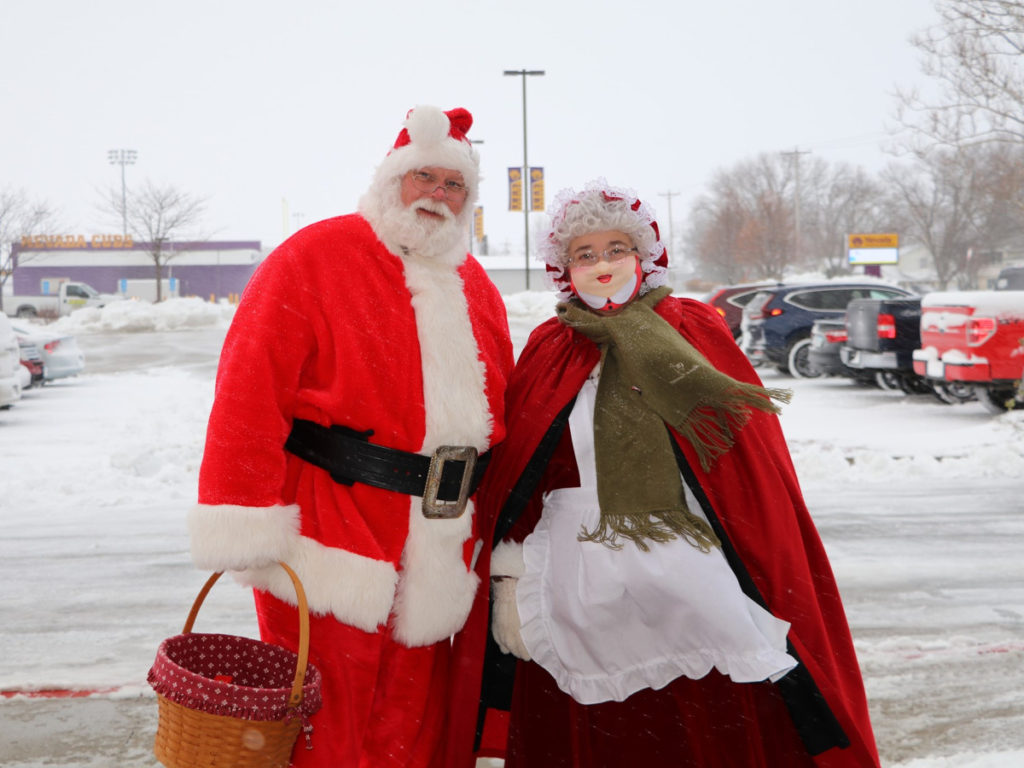 Santa and Mrs. Claus (AKA Kris and Debbie Corbin) pose for a picture while greeting drive-thru participants in this past Saturday’s Parks and Rec event, Breakfast With Santa, served by the Nevada Lions Club.

Being Santa in the year 2020 has, just like in every other aspect of this year, come with its share of challenges.

But amazingly, kids have adapted.

In reviewing letters from area children, Santa and Mrs. Claus (aka Kris and Debbie Corbin) noticed a measurable change in tone from most years, a change they felt was worth talking about.

“Kindness,” the two shared, is a word and an attitude coming up quite often in the letters they read.

“The kids will ask, ‘Have the reindeer been good? Are the elves being safe? And are you (Santa) being safe?’,” Debbie said while sorting through the many letters she and Kris have collected during their various seasonal outings as Santa and Mrs. Claus.

“Kids are not only using the word ‘kind;’ they want people to be kind,” Debbie said.

The Corbins are touched when they read a letter from one young person who doesn’t want anything for themself. “They want for mom and dad to be happy,” Kris said. “They know mom and dad don’t have a lot of money this year. One even asks if Santa can bring mom and dad something to make them happy.”

Mrs. Santa has been very cautious about Santa’s safety this year. “Whatever event he is doing, he has to be protected,” Debbie said.

So being roped off or kept at a distance by riding on a fire truck…a variety of different things have been done to keep Santa socially distanced from kids.

“It’s hard. I’m used to kids running up to me, climbing on me, hugging me, pulling on my beard,” Kris said.

But just like the idea of kindness kids are expressing in their letters, the Corbins are seeing kids employ kindness in person, too.

“They understand this year is different, and they’re very good about it,” he said.

A long line of Santas

Corbin, who just turned 61 and retired last year after teaching at Collins-Maxwell Schools for 34 years, comes from a long line of Nevada “Santas.” Kris has become, in recent years, Nevada’s primary Santa for most community events. He mentions taking over the gig from Mark Lyon about 10-12 years ago. Along with Lyon, names like Bill Horine, Ed Pimlott, Chuck Harrell, Shorty Johnson, and Mike Foley come to mind when he thinks about all the great Santas Nevada has had, knowing he has probably missed a few names on the list.

His grandfather, OE Corbin, was also a local Santa back in the day and might have been why Kris’ first Santa part came when he was an eighth-grader. “They didn’t have a Santa for the elementary kids,” Kris remembered. “So, they asked me.” Borrowing his grandpa’s red suit, Kris went into every elementary classroom that year.

Kris’ twin brother Karl — a retired Nevada teacher — has also gotten into the Santa act in recent years. Sporting an identical all-natural white beard, the twins help cover each other when more events than one Santa can handle crop up. They can check in often. Both now work for Menards in Ames, Kris in electrical, and Karl in hardware.

Along with playing Santa, Debbie came onto the scene a few years ago as the regular Mrs. Claus. “It looked like fun, and I liked seeing the kids,” she said. “But Santa is still number-one.”

“Santa is number-one,” Kris agrees, “but some kids can talk to Mrs. Claus better than they can to me.” Kids will also often be very interested in getting to see what Mrs. Claus really looks like! For his first few years as Santa, Kris had Reta Lyon by his side, then Vicki Tendall. “I even had a few years where I was on my own,” he noted.

Because some Santas have had to cut back or not be out this year, Kris has received more calls. With his brother able to help, Santa’s territory has expanded.

He also hopes the influence this pandemic year has had on kindness will expand into the future.

His hope for the new year is to see the world get back to normal. “I hope this vaccine gets out, and we can start opening things up a little more. I do think we need to take it slow.”

Then in true Santa style, he talks to “his believers.”

“I’m hoping next year we can go back to the true Santa spirit with hugs and all. I understand why things had to be different this year, and after reading your letters, I think you kids understood it too. To all of you, I wish a Merry Christmas. I’ll see you next year!”