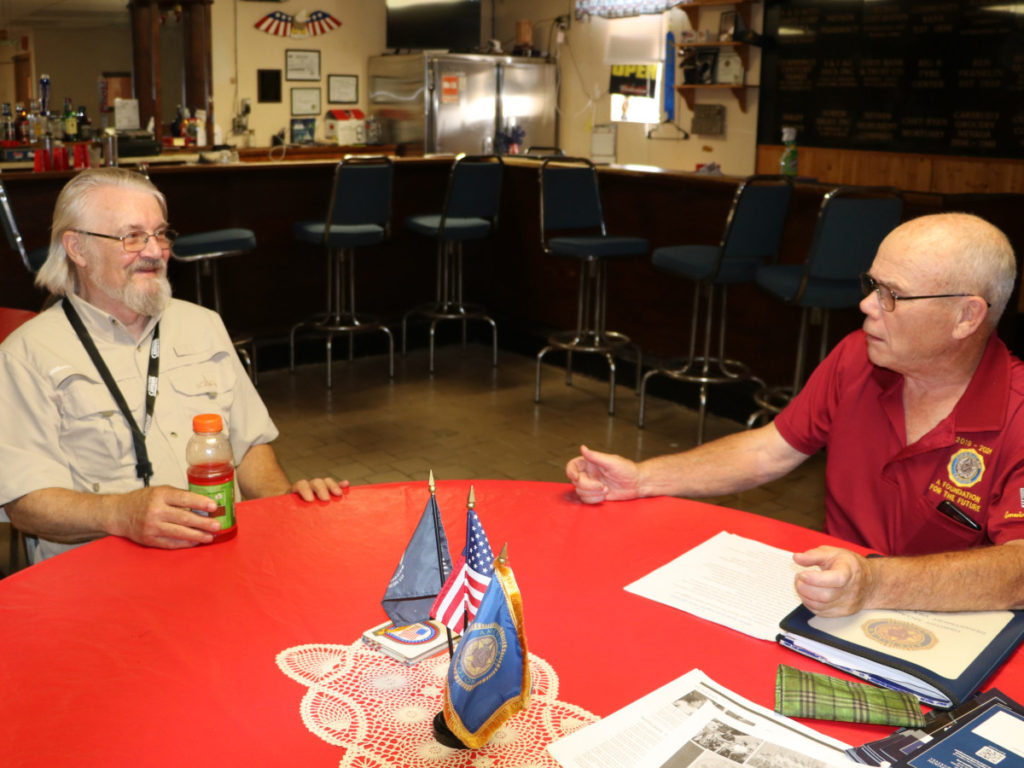 COVID-19 has disrupted many institutions this year. One of those is Nevada’s American Legion, William F. Ball Post #48.

Despite lost revenue from BINGO nights and Fish Fries, Tim McLaughlin, Past Post Commander and current Adjutant of the Nevada American Legion, vows the local organization will persevere. After all, it has the strength of longevity behind it.

Last year, the American Legion celebrated 100 years since its founding in 1919 as the nation’s largest and most influential organization of U.S. wartime veterans and their families.

“Every single veteran who served honorably since World War II is eligible to join the American Legion,” McLaughlin said.

McLaughlin and Nevada’s current Post Commander Russ Cruse sat down recently in Nevada’s Post home, at 1331 Sixth St., to talk about their organization. The building has been pretty quiet since COVID-19 descended on Iowa early this year.

“All the funds that come in through fundraisers and events, help pay the Legion’s utilities and insurance and other bills,” Cruse explained. Those funds also help support local scholarships and sending youth to Boys State.

So far, the Nevada Legion has dipped into its reserve fund to keep up with its expenses. Leaders are hopeful residents will respond strongly when the Legion resumes things like Fish Fry Fridays (which started Sept. 11), other Legion suppers, and BINGO.

Post #48 has 161 dues-paying members, plus 18 people in the Nevada area who are affiliated. Of those, about 35 members are actively involved in the Legion activities, one of which is providing an Honor Guard sendoff when a veteran dies. “We’ve continued doing those, even through the pandemic,” McLaughlin said.

The Honor Guard services go hand-in-hand with what McLaughlin and Cruse believe is the American Legion’s most important function – taking care of fellow veterans. Not only do they proudly say farewell to deceased veterans, but members of the American Legion are also passionate about helping young veterans or veterans who are struggling in various ways.

“From there we go to promoting Americanism, caring for our community and providing an adequate defense for our country,” McLaughlin said about the Legion’s priorities.

McLaughlin agreed. “We come to the Legion from different ways…but both of us look at it very similarly when we help a fellow veteran.”

By “different ways,” McLaughlin refers to the paths taken in life and the military that precede joining the American Legion.

Cruse was in the Navy from 1966 to 1985, serving as an acoustic analyst who ultimately graphed ocean sounds to detect vessels. McLaughlin served in the Army from 1973 to 1998, starting as an artillery officer overseeing Pershing Missiles in Germany, and working in several offices and positions before his final active duty assignment at the G5 office in Hawaii.

Passing along the message of patriotism and Americanism in the local community is another essential task the local American Legion works hard to do.

This year, the Legion held a flag-raising ceremony in front of City Hall. “It wasn’t fancy, but it was to show our support (for Americanism),” McLaughlin said.

The American Legion is doing flags for the start of Nevada’s home football games this fall, and both Cruse and McLaughlin are hopeful they can have the Veterans Day program at Nevada High School. It’s one of their biggest educational events each fall. “It’s certainly one of the most important things we do … teaching today’s students why people served and why they continue to serve,” McLaughlin said.

No matter where they are in life, the American Legion is there for all veterans who have served honorably. “We need veterans to listen to other veterans and help them when they need help,” Cruse said.

“And we need other people to let us know if we – as the American Legion – can help a veteran who’s in need,” McLaughlin said.

Hopefully, our nation and the Legion’s activities and fund-raising efforts will soon return to normal. That would help the group continue to provide scholarships and opportunities.

McLaughlin is determined to keep providing those opportunities. “We will have them, one way or another.”