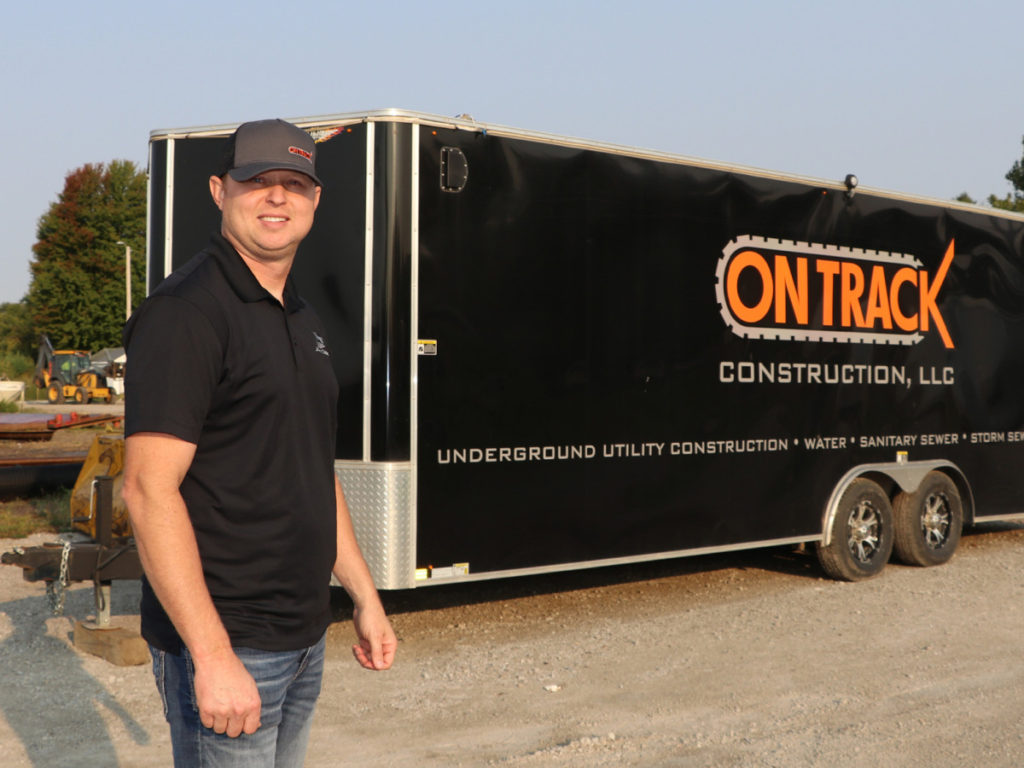 On Track Construction owner, Matt Runge is pursuing the small industrial park to be located just north of the railroad tracks on Sixth Street’s west side.

Presently, Runge uses the property as a staging area for On Track, an underground sewer and water contractor, with business offices just a few blocks south on Sixth Street.

His new venture will take a gravel lot storing equipment and construction materials and turn it into a paved, three-lot property with light industrial or personal-use buildings.

“Lot 2 we have a purchaser for,” Runge said. “He (the purchaser) plans to have a shop where he can work on classic cars.”

Lots 1 and 2 will be located west of the Fifth Street corridor, which provides one point of access to the property. Both lots are approximately a third of an acre. Lot 1 will be for sale.

On lot 3, the 1.2-acre-space between Fifth and Sixth streets, Runge plans to erect a building with seven units, each measuring 36 feet wide by 50 feet deep.

“I haven’t worked out whether these units will be sold or leased,” he said. The lot 3 project is at least two to three years away. He plans on erecting “industrial condos,” each with a big overhead door, a walk-in door, and a restroom.

“People could use these units for storing an RV or camper, or they could run a business from it. Or if someone wanted a nice little shop area to work in … it will be a space with heating/cooling, which can be accessed from either Fifth or Sixth streets,” he explained.

The plan is to improve access from Sixth Street by creating a new driveway just north of the median.

Runge is confident the Sixth Street Industrial Park will improve the appearance of the neighborhood.

“I’ll be working on property covenants so people won’t be allowed to park or leave stuff out overnight,” he said.

City of Nevada Zoning and Building Administrator Shawn Cole said Runge’s project fits in nicely with the zoning of the area. Cole reminisced about his former boss, Scott Harter, and how they worked on changes to the zoning of the railroad corridor through Nevada to be a place for light industrial projects and expansions.

“Having a place to transition to light industrial use, still allowed us to maintain the value of nearby residential properties,” Cole said.

Runge’s employees are currently working on a water main along the Fifth Street corridor entry to the property. Once the infrastructure work is completed, the purchaser of lot 2 can proceed with his building.

Runge plans to expand his On Track business at Nevada’s West Industrial Park, where he will be relocating his equipment and materials over the next couple of years. “More about that project later,” he said.

Additional details about Runge and On Track

Runge, 42, started On Track Construction, LLC, in 2017, after working for several construction companies during and after college.

A native of Keokuk, he came to central Iowa to attend Iowa State University and never left the area.

“I studied construction engineering and architecture at Iowa State,” he said, and he got into water and sewer work because it interested him.

“Dirt work, you get rain one day and may not be able to work that day. But with water and sewer, you have a little more work opportunity.”

Also, he noted, the underground was intriguing. “There are so many unknowns, which keeps things interesting. There are more moving pieces to it than some of the other trades.”

And, he concluded, “there was obviously a need for an underground contractor in the area.”

On Track’s first big project in 2017 was for the City of Nevada, doing the water, sewer work on Sixth and Eighth streets.

“Right off the bat I had six employees, and by the end of that (2017) season, I had almost 10.” Now, On Track has 30 employees, and he offers good-paying jobs and benefits. He wants to stay competitive to keep good employees. “Employee retainage is everything,” he said.

On Track works in Central Iowa, with most projects no more than an hour away from the Ames/Des Moines area.

On Track has continued to work with the City of Nevada as the contractor for sewer and water main replacement on the city’s $9 million Downtown Construction Project.

Runge likes working in Nevada. “It has the small-town feel … people look out for each other, and it’s easier to fit in, in a small town and be a part of helping it grow.”

When he’s not working, Runge enjoys spending time with his family. He also enjoys outdoor activities, ATV’g, and riding his motorcycle.

To find out more about On Track Construction, visit the business online at www.ontrackconstructioniowa.com or contact Runge directly at 515-451-6719 or by email: ontrackconstruct@gmail.com.