Questions and Answers about the ownership transfer of Gates Memorial Hall 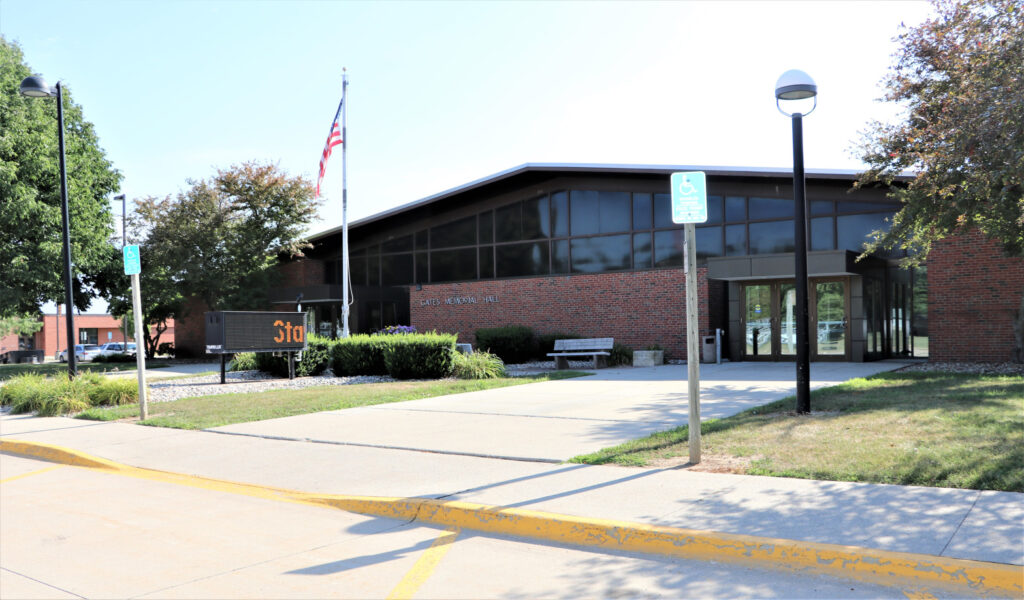 The City of Nevada and the Nevada Community Schools have taken notice of recent discussions and questions concerning the Gates Memorial Hall transfer of ownership from the City to the School. This sale has actually been in the discussion and/or planning stages since as early as 2015. (See Nevada Journal story: nevada.advantage-preservation.com/viewer/?k=”gates hall”&i=f&by=2015&bdd=2010&d=01012015-12312015&m=between&ord=k1&fn=nevada_journal_usa_iowa_nevada_20151112_english_3&df=1&dt=10 (advantage-preservation.com.)

A public hearing on the sale is scheduled for Monday, April 26, during the 6 p.m. City Council meeting. To speak during the session or share comments in writing, please call City Clerk Kerin Wright, 515-382-5466, or email her at: kwright@cityofnevadaiowa.org. You may also drop off written comments for the public hearing at Nevada City Hall, 1209 6th St. All written comments must be received by 4 p.m. on April 26.

This transition of ownership has been discussed for a number of years, and was presented to the public as part of a four-prong project during open meetings held in 2017. (See this link, Nevada city and school officials hold joint meeting Monday – News – The Ames Tribune – Ames, IA), to a newspaper report on one of the meetings held. We should note, COVID-19 held up some parts of the overall project from the original timeline this story shared.

Q: The Gates Hall kitchen is one of the only commercial kitchens to rent in town. Will it be available to rent once ownership transfers to the School? Will it be more costly to rent when the School takes over?

Answer from Steve Gray: The Gates kitchen and auditorium will still be available to rent once ownership is transferred to the School. The kitchen rental rate for the School and City are the same ($30/hour); however, under the School District Policy, the kitchen can be rented free to certain groups.

Q: The NHS Alumni Banquets were supposed to be held at Gates Hall free every year, as per Mabel Gates Wadsworth’s wishes. Will we still be able to hold the alumni banquet there? Will we be charged heavily to use it, thus sending the cost of banquet tickets up?

Answer from Tim Hansen and Steve Gray: The Nevada Alumni Banquet has been held the last weekend of June free of charge at Gates Hall. This will not change when ownership transfers to the School.

Q: I’ve rented Gates Hall for two events a year. Will it still be available to rent? Or will it now just be for school functions?

Answer from Steve Gray: The kitchen and auditorium will still be available to rent once ownership is transferred to the School.

Q: Has the School always had first consideration in rental of the facility; wasn’t that what Mabel Gates Wadsworth wanted?

Answer from Tim Hansen: The City and the School have worked together over the years to accommodate school events at Gates Hall.

Q: The cost to rent Gates Hall has been outlandish in recent years. Why couldn’t the City bring the cost down so people could afford to rent it — then it would be used again, and ownership could stay with the City. Right?

Answer from Tim Hansen: It has been at least 12 years since rental rates for Gates Hall have been adjusted. Our current rate structure is as follows:

When we rent the building to a group, we provide a complete table/chair setup prior to your arrival, have staff on-hand during all event time(s), provide all tear down of tables/chairs, and clean the building afterward. Although I can’t say what other venues charge, I feel comfortable in saying our rates are lower than most, especially considering that we do all the setup/tear down/clean up.

Wedding Example: Basic costs for a wedding event with 250 attending and renting just the auditorium and City staff time/costs.

The City makes very little money from this type of event, and in many cases, may lose money when you figure in the extra costs mentioned above.

Q: Who has rented Gates Hall in recent years? Why aren’t we doing more to market the facility?

Answer from Tim Hansen: Going back to 2019, our last full year prior to COVID, we hosted 11 wedding receptions. This was a similar trend over the previous 3-4 years. Over the last several years, the biggest users of the building have been the City/Parks and Recreation Department and the Nevada Schools. We have some smaller groups, such as a local church group, occasional business meetings, etc. These events, along with the Ames Coin Club, Quilters group, Nevada High School Alumni Banquet, Oak Park Academy Reunion, community blood drives, family reunions, etc., can all still be held at Gates Hall after ownership transfers to the School.

Under the school’s ownership, one thing that will change is the use of alcohol in the building. Alcohol will not be permitted.

Nevada has some fantastic facilities available to the public that have become destinations for larger events and receptions, such as Gatherings, Indian Creek Country Club, Fair Board Community Building, and the Pavilion. Also, other meeting space is available at the Senior Center, Library meeting room, Story Medical conference room, etc. Some of these spaces are available at a reduced cost or are free to use.

From City Administration: As a City, we’ve talked about trying not to compete with private businesses. Take the new Field House to be built at SCORE, for example; the most significant question we have had to answer centered around fitness and weight equipment availability. The City has indicated over and over that we (City) would not have fitness and weight equipment in the Field House and put ourselves in competition with local fitness venues. Not competing with local gyms was the number-one issue we were asked to address when talking with the public.

If the City were to keep Gates Hall and lower rates, it would put us at a greater financial disadvantage and increased competition with private sector venues.

Under the School’s ownership, keeping Gates Hall as a community facility remains intact. The facility name Gates Memorial Hall will remain. The information displayed inside the building about Mable Gates Wadsworth will remain. Mable Gates Wadsworth was an educator and had strong support for education in her wishes. This sale and transfer of ownership are to an educational institution that is a heavy user of the facility and understands the importance of keeping Gates Hall a community facility. The primary physical change to the building is converting the South Room and North Room to administrative space. We have many other venues in the community that can provide similar meeting space to the rooms that will be renovated. The auditorium and kitchen remain available for the community.

Q: What will happen to the Nevada School Education Foundation’s Trivia Nights, which raised funds for scholarships? Now that Gates won’t allow alcohol, will these great events end?

Answer from Steve Gray: Trivia nights will continue. The Education Foundation Board is currently exploring other venues. Also, the Fieldhouse may be an option once it is finished.

Q: Why was the public not kept aware of this sale that is taking place?

Answer from Steve Gray, who shared a press release about this from October 2017: This [transfer of ownership] has been a topic that has been discussed on numerous occasions in public forums and community input sessions. Dating back to 2015, when the first serious discussions were taking place about a recreation facility for Nevada, this topic was part of those discussions and public input sessions.

Link to the press release issued by the School in 2017:

Q: Why does the School want ownership of Gates Hall?

Answer from Steve Gray: By moving the District Office out of the Middle School and into Gates, the Middle School renovation will gain additional square footage for student purposes. The Gates Auditorium would also be used for various school activities.

Q: Will the school change the rates for the use of Gates Hall? How do we rent the facility from the School? Who do we call?

Q: What happened to the Gates Hall Board of Control?

Answer from Tim Hansen: The original makeup of the Gates Hall Board of Control consisted of 5 members designated as follows: 1 member from the Cemetery Board, 1 member from the Library Board, 1 member from the Methodist Church, 1 member from the City Council, and the Superintendent of Schools. From the time I started working with Gates Hall in 1993, there have been challenges filling the spots on this Board. It became even more challenging in the early 2000s after the remodel was completed. Eventually, it got to the point that members could not be found, so the Board stopped meeting back around the 2008-09 time frame. Since the cemetery and Gates Hall had been put under the direction of the Parks and Recreation Director, it was decided that the Park Board, Cemetery Board, and Gates Hall Board should merge into one Board. The hope was that with one Director and one Board, that would make one point of contact/direction, it would be easier to find members for one Board instead of three. All board members would be appointed as at-large members from the community with no specific ties to any one organization or group.

In 2010, the Park Board and Cemetery Boards merged. Gates was not included in that process. Since all members would be at-large, the School would not be guaranteed a spot on the new Board as they had on the Gates Board, so Gates remained a separate board. This still left the difficulty of finding members for the Gates Board, thus the Gates Board essentially stopped meeting, and information/recommendations went from the Parks and Recreation Director to the City Council as necessary. It remains this way today.

Q: Can the City sell Gates Hall when the will of Mabel Gates Wadsworth gave it to the City?

Answer from City Attorney: Yes—the testator’s will does not restrict the transfer of ownership of the building. In reviewing any restrictions on use, Iowa law requires that the beneficiary of a legacy gift carry out the donor’s wishes to the extent possible—typically giving preference to the symbiotic relationship between the donor and the gift. In this case, the name of the memorial building will remain the same and the wish of the donor that the facility be used for public gathering and school events remains intact.