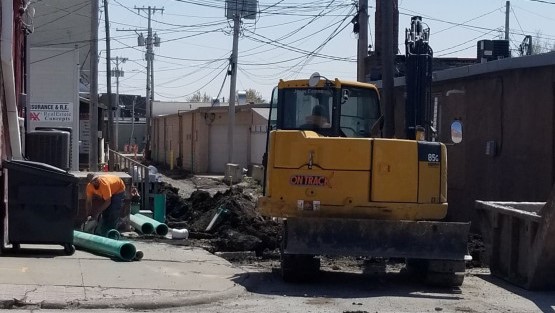 Phase II of the Downtown Construction Project is moving along.

According to Shawn Cole, Building and Zoning Administrator for the City, utility work has been finished on K Avenue, west of Sixth Street, and utility work is being completed in the alley north of K Avenue in that area as well.

“On Track (the company doing the underground utility work) will be moving out starting tomorrow,” Cole said, “and Construct Inc. will be coming in by early next week to begin prepping for paving.”

Cole reminds the public that the paving process can take seven to eight weeks. It includes paving the mainline, working on curbing, paving of parking areas, electrical work, pouring of brick pads and sidewalks, etc.

Other Construction notes around town:

South Glen
Paving has begun in the South Glen subdivision, along 11th Street at the south edge of town. “They’re paving the east, north-to-south road today,” Cole said. He predicts paving will last about two to three weeks, and once completed, the infrastructure work in the new subdivision will be complete.

Lincoln Highway (at the west edge of town)
Alliant is putting in a new gas line in this area. It’s an improvement project, Cole said.