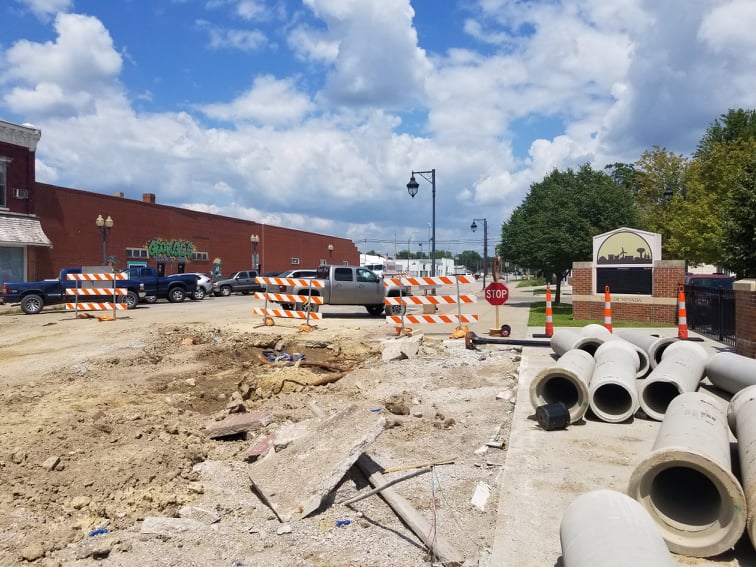 The closure of Sixth Street from Lincoln Highway through M Avenue is expected to happen next Wednesday, Aug. 11, as crews begin concrete removal in the area.

Corey Merrigan, Downtown Construction Project manager with Construct, Inc., said crews will also tear out concrete on the east side of Sixth Street in the block between M and N avenues. That block will not be closed totally. Vehicles will have access from the north, and parking will be available along the west side of the street between M and N.

“There is a lot of underground work to do in this block and half block,” Merrigan explained of the work area north of Lincoln Highway. “On Track estimates about six weeks of work for just the underground lines in this area.”

The City of Nevada will open an alley access off of M Avenue, between 6th and 7th streets, to provide entry to the City Hall/Senior Center parking lot during construction.

Merrigan said On Track has stayed on task in completing the underground work along Lincoln Highway. “We’ll both (On Track and Construct) be onsite simultaneously later this week,” Merrigan said.

Other concrete work, and the things that accompany it — sidewalks, lighting, painting, etc. — along the Lincoln Highway will happen through mid-September. “My best guess of fully opening Lincoln Highway is middle of September,” Merrigan said.

Merrigan said the rest of the alley that runs behind State Bank was poured this morning (Aug. 2), and he expects to have this alley totally open by this Friday.

Most of the alley north of K between 6th and 7th streets will also be open by the end of this week. It will, of course, remain closed at the north end until Lincoln Highway work is completed.

Merrigan said he’s always careful to give dates when it comes to construction, but he is hopeful construction work will continue to progress on a normal schedule.

“If the schedule doesn’t lie to us, it looks to me that On Track will be done with its work for this project by the end of September. That would mean we’d move in to work on concrete for that last block and half block by Oct. 1,” he said.