The City of Nevada looks back at 2020 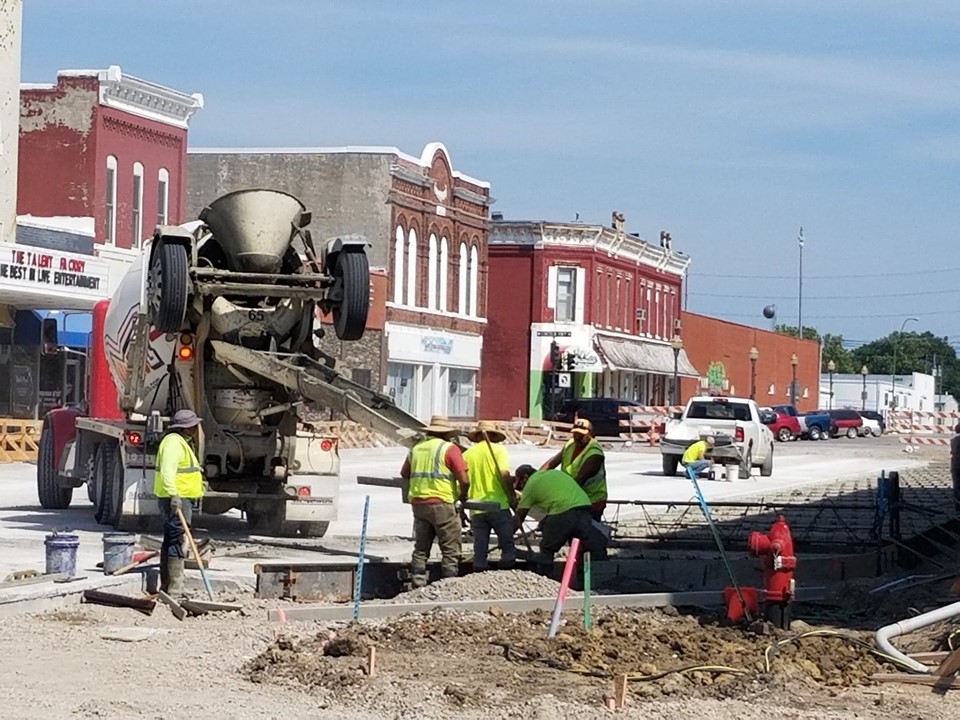 COVID: City Leaders put a plan in place to deal with the COVID pandemic.

The Mayor and City Council successfully utilized Zoom and other technology to continue meetings and continue community coffees, which are chances for city leaders to talk informally with residents about various issues.

Despite the pandemic, our City departments found ways to continue the work of the City safely.

The City was able to allow for a spectacular and safe fireworks show, despite the pandemic.

BRANDING: The City worked with the Nevada School District and the Nevada Economic Development Council to create new branding. Each entity uses the same “N” design in different color schemes. Since its adoption, the City has begun ordering new apparel and considering new signage to bring our new branding to the forefront.

The City also worked with Main Street Nevada and NEDC to develop the decorative etched brick designs, which will be placed at each bumpout as part of the completed Downtown Construction Project.

ADMINISTRATION: The City hired a new City Administrator after several transitional months. The hiring process included many city officials, the city council, and residents of the community to ensure the selection of the best possible candidate whose style matched the City’s needs.

COMMUNICATIONS: City officials hired a Development and Communications person to improve the City’s connection with Nevada residents and organizations. This position had been discussed for at least 10 years.

With a communications person onboard, the City started a news blog on WordPress, which, in its first six months, shared close to 90 news items to keep residents informed.

The City also approved a contract with Saltech in Ames to design a new City website.

STORMS: In August and September, the City, with major work by the City Streets Department and Parks and Recreation Department, accomplished a major cleanup effort in the community following a historic derecho storm, which took down many trees and caused other property damage.

FUTURE INTERCHANGE: City Council approved a major interchange location along Highway 30. The Council voted to locate the interchange at Airport Road. While the project is still years away, the decision impacts constructing a flyover at the S-14 intersection at Highway 30. The flyover is set to be constructed in 2023. The interchange decision also allows for other measures – signage and development – to happen in a planned way.

DOWNTOWN CONSTRUCTION: The City completed more work in phase one of the Downtown Construction Project than initially planned for 2020. Because of the pandemic, the city chose to do most of the work happening south of Lincoln Highway in 2020, which means the overall project is more than half-way completed as we head into the final phase in 2021.

HEALTHY HOMETOWN: City leaders and other community organizations/leaders began plans to become a “Healthy Hometown,” in a program supported by Wellmark BCBS. Several meetings and projects have been proposed to encourage eating well, moving more, and feeling better.

The City also worked toward and eventually secured a $2 million grant, which will go toward natural waterway improvements in the community. The City qualified to apply for the grant because of a grant program open to those borrowing for wastewater improvements.

BUSINESS: The City celebrated the decisions of several businesses to locate, build or expand in Nevada, including:

The City celebrated with Main Street Nevada receipt of the $75,000 Challenge Grant from the Iowa Economic Development Authority and Main Street Iowa by Evie and Seth Peterson, owners of Gatherings.

HOUSING: The City saw the start of dirt work on the South Glen housing development on south 11th Street, a project of developers Al Kockler and Jim Frevert

NEW VISION PROCESS: The City and other community lead organizations began work on a new visioning process for our community.

MAPPING: The City, with our engineering firm HR Green, improved access to its data and mapping resources, moving it from “only one computer” to be accessible by everyone within the city through the cloud. The City then held staff training on how to use the data.

DEPARTMENTAL ACCOMPLISHMENTS: Two of our departments provided lists of improvements for 2020.

Received the FEMA Assistance to Firefighter Grant (AFG) and purchased 74 pairs of fire gloves and 74 Nomex hoods for our fire department. The grant award was $8,800.

Drafted a state law protecting cities and fire departments when they donate equipment to other departments. (Bipartisan support)

Drafted grant guidance to the SFM on the fireworks grant setting criteria for the state to use when issuing Local Fire Protection and Emergency Medical Services.

Nevada Jaycees purchased a set of children’s turnout gear to allow kids to wear firefighter gear without the risk of exposure to cancer toxins.

Applied and received the Alliant Community Service grant for $1,000 to purchase first aid kits for our city departments.

Completed a Request For Proposal and purchased a new Ford F350 to replace a 13-year-old pickup used for UHP quick attack.

Applied for Storycomms radio grant to equip our schools with four P25 compliant radios and equip our public works director with the same. This will allow our schools to communicate with law enforcement during an emergency.

Applied and received the DNR wildland grant for 4 backpack kits and 12 wildland suits.

The Nevada Firefighters Association purchased $4,500 worth of fitness equipment to outfit the fire station with workout and fitness-related equipment.

The fire department topped 50 members for the first time.

The fire department responded to 28 calls in 72 hours (including 4 structure fires) during the Aug. 10 derecho.

From Tim Hansen: This was a difficult and challenging year, to say the least. Many things were not able to happen, and many others had to be done differently or had many additional steps and protocols put in place. In many cases, we not only thought outside the box, but we created a new box.

The positives that came out of 2020’s challenges were new programs/activities/opportunities. Once again, our department staff displayed commitment and teamwork throughout the City.

The other big item from a Parks and Rec standpoint is the continuation of the Field House project. We continued work on plans and on the silent phase of the fundraising campaign in 2020. There will be some exciting things happening with this project in 2021 and beyond.

From Rhonda Maier: From a recreational perspective, I think our department’s biggest accomplishment of 2020 is how we were able to think in a new way to provide recreational opportunities for our citizens. Some of these opportunities will become part of our regular yearly programming—for example, the Drive-In Movie, Kids Camp, and Kickball.

It is also an accomplishment that we could work with our CIRL communities to begin offering sports programming in the fall, with safety precautions in place. Having “normal” flag football, volleyball, and basketball seasons have been well received. All of our communities and participants are thankful for the opportunity.

In addition, maintaining our Adult Softball League and Jr. Theater programs with a few minor hiccups showed that we could overcome obstacles and give participants the best experience possible, regardless of circumstances beyond our control.

In 2021, we will continue to see how COVID has positively impacted our department as a new swim lesson program will be unveiled, and we are hopeful it will exceed expectations. While 2020 was tough, we learned, we tried new things, we had some challenges; however, we still did the best we could and continued to grow in ever-changing times.

From Erin Mousel: I’m in agreement with everything Rhonda has said – all great things we contributed to the community. While I was involved in some of the things she mentioned, the Kids Camp was going to be at the top of my list for things offered as I was directly involved in that. I think it gave kids an opportunity to have some normalcy when nothing else was an option – as were the other programming opportunities Rhonda spearheaded – kickball, flag football, volleyball.

Additionally, we did end up offering SCORE as a tournament site for baseball. We were able to host tournaments in a safe and successful manner.

We’ve tried to think outside of the box when it comes to opportunities for our community, and that will continue to be the goal moving forward.

From Joe Mousel: I would have to agree with Rhonda. As City employees, I’m thinking about how we came together during a disaster in the derecho. We worked with each other and other departments to help the community.

From Mike Rasmussen: We found ways to make Gates Hall safe for the public while still keeping social distancing in mind. The extra time and effort to sanitize surfaces and enforce the Governor’s mandates made for an unusual year, to say the least.

From Gene Fritz: For me, the biggest accomplishment would have to be the quick and timely manner of cemetery cleanup after the derecho disaster. Due to solid teamwork, dedication, and hard work from staff, what looked like a never-ending battle was brought back to shape in a couple of weeks.

We have tried to include as many of the City’s major accomplishments of 2020 as possible in this article.

The City is now focused on having as many residents as possible fill out the Vision 2040 survey, which can be found at this link: https://tinyurl.com/Nevada2040. Paper copies are also available at City Hall. If you haven’t taken the survey yet, please take a few minutes to do this, and help us identify our future achievements.