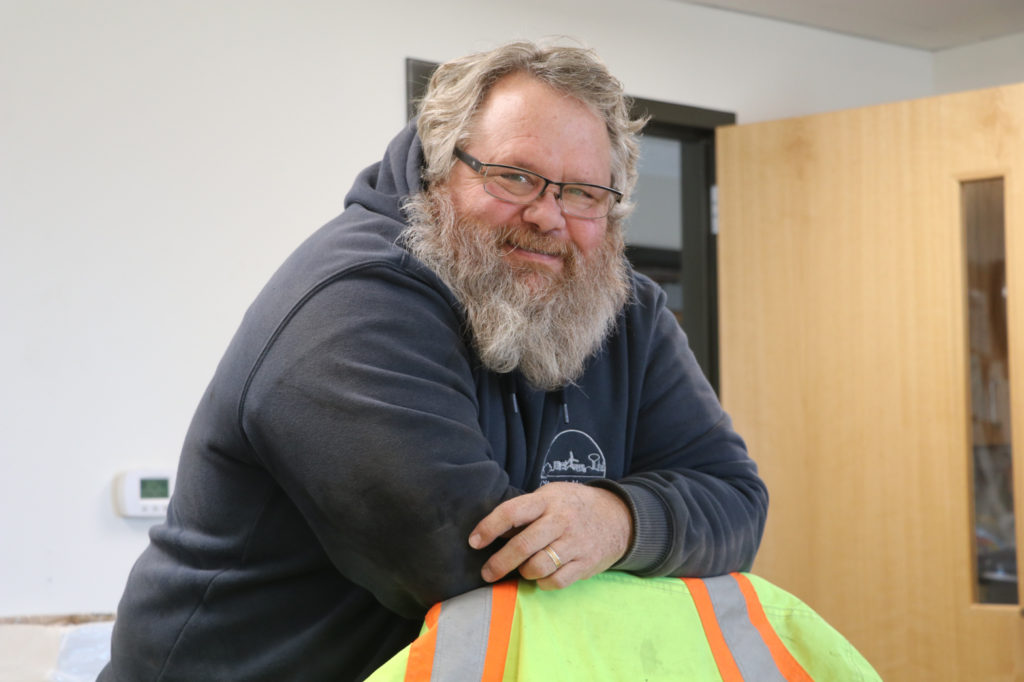 (Note: This is the third of three stories on three Nevada Streets Department employees who celebrate 30 years with the city in 2021.)

Dennis Mensing knew the life of a city streets department worker. His father, Dick, was employed in the Nevada Streets Department for 26 years.

Sadly, Dick Mensing suffered a tragic end of his career. He died on the job in a backhoe accident in 1990.

Dennis is thankful he’s made it 30 years with the streets department. At 59 years of age, he now meets the magic “rule of 88” and hopes to retire this spring. Retiring would give him time to enjoy his favorite hobby – working with wood to construct small items, like footstools, and refinishing older pieces of furniture.

Like the other two 30-year streets department workers, Dennis is also a Nevada High School graduate, Class of 1980.

He has fond memories of growing up in Nevada. “I grew up playing little league baseball and loved going to the old swimming pool,” he said. “I rode my bike to that pool, behind Gates Hall. I rode my bike all over town. It was the only thing to do until I got my car.”

Dennis was involved in football, wrestling, and baseball in high school, and he enjoys many fond memories of his younger days in Nevada.

“It was a close-knit community; everybody helped each other and more or less everyone knew each other,” he said. “I remember a downtown that was active, especially on Friday nights. My mom would work at Scudder’s (Department Store) until 8 p.m. on Fridays, so until I got into sports, I’d go to main street on Friday nights and walk around until she’d get off work. Then we’d go out to eat.”

After graduating from high school, Dennis went to Ellsworth Community College and got an associate’s degree in accounting. “Then I transferred to UNI, started in the business program, but I soon switched to the teaching program.” Rather than finish and earn his degree, Dennis said he decided he’d rather start making money instead of taking on more debt.

He returned to Nevada and was hired at Burke Marketing. In three years there, he said, he did a little bit of everything. “I was in the back room, the cook room, the grind room and weighed spices. I also went over to Ames to Burke’s original plant and ran test products.”

He left Burke and did a short stint at Kum & Go, where he would be a manager until they wanted him to leave town. He left Kum & Go to work for Larry Krupp in construction.

He was working for Larry on the day his father died. “I was working on a trench and I heard the ambulances and a helicopter, and the next thing I know, Larry came to get me and said there’d been an accident.”

Since his father was a reserve officer with the Story County Sheriff’s Office, Dennis said he got a ride to Des Moines with a deputy. “We must have gone 90 mph down to Des Moines.”

In 1990, Dennis left his job with Krupp to follow in his father’s footsteps. He had many connections to the City, having also worked for the City during summers as a youth.

The job has been educational. “Everything in the streets department is about learning. There were things I’d done and things I’d never done, like concrete, asphalt. You learn new equipment and learn to work with different people in different situations,” he said.

One of his career’s oddest moments came when he was jetting sewers and found a dead cat at the bottom under a sanitary manhole. To this day, he said, “I can’t figure out how it got in there. A storm line I could see, but not a sanitary one. You do find all kinds of things in the lines.”

Through it all, if you work with good people, that’s the most important part in Dennis’ opinion. He feels he’s worked with good people in the City and other places he worked before this job.

His most cherished memory of his city co-workers, he said, was their willingness to help him get some of his mom’s things moved out of her house when she decided to move. “They helped us move some stuff, helped us with painting. They treated me like family, which was nice.”

If he had to go back in time, Dennis said he’d still choose to take the job with the City. “It offered good benefits, and I’ve enjoyed working outside on a variety of things.”

Current Director of Public Works Jeremy Rydl said the department benefits from the knowledge of Dennis, Dave Harrison, and Mike Ackerman. “There’s a lot of experience that comes with these three employees, and that greatly helps our department,” Rydl said.

The City Congratulates Dennis on 30 years of service with the Streets Department.