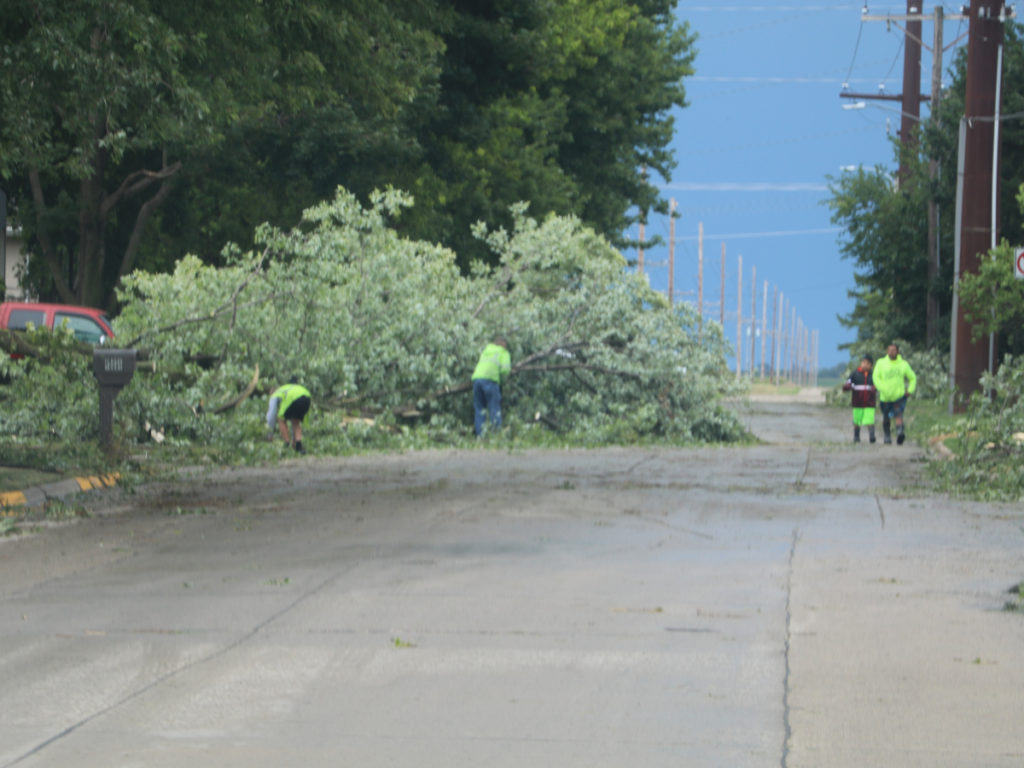 Nevada Fire Chief Ray Reynolds was keeping his eye on the weather that Monday morning.

“We had some warning it may develop into something when we were placed under a severe thunderstorm warning,” he said about Aug. 10.

Reynolds used to be critical of sounding sirens for high winds. “People would not give heed to sirens if they did not see ominous black skies,” he said.

As the sirens sounded 10 minutes before the storm entered Nevada, workers at Nevada City Hall were taking phone calls from people asking why the sirens were going off. In checking with the fire chief, they echoed the chief’s words, “High winds are expected.”

Yet, no one could have predicted the scope of what was about to happen.

Reynolds heard a tornado was forming in the Cambridge, Huxley area, so he drove to Airport Road to spot it. “I figured we would have one soon,” he said.

Nevada Parks and Rec Director Tim Hansen was having a day of office tasks and had taken an early lunch to meet an HVAC representative at his house on the west side of Nevada. He was at home when the storm hit.

Nevada Streets Superintendent Jeremy Rydl had run an errand first thing that morning to Marshalltown and was on his way back to Nevada when the storm met him. He kept driving through it to get back to Nevada.

Not one of them, Rydl, Hansen, or Reynolds could have imagined the amount of work there would be to do once the storm passed. Honestly, none of them would have predicted a ‘derecho,’ which is defined as a line of intense, widespread, and fast-moving windstorms and sometimes thunderstorms that moves across a great distance and is characterized by damaging winds.

“I’d pulled into a farm drive across from Van Wall Equipment to get a vantage point of the approaching storm,” Reynolds recalled. “The storm hit, and we were providing updates to the Story County Emergency manager. I saw a stop sign bend over in the wind, and I knew this was bad.”

Hansen, watching from his kitchen window, knew it was unlike a normal thunderstorm when he witnessed the tree in his backyard fall into his neighbor’s garage and then saw his patio fence break apart.

“Things just changed and changed so fast,” he said of the storm’s crushing blow.

On Monday, Nevada City Council members heard updates about the storm’s significance and all that had transpired during the previous two weeks. Those working under Rydl, Reynolds and Hansen, bore the brunt of dealing with much of the aftermath.

Reynolds spoke about the value of the new computers, recently installed in all public safety vehicles. “I turned to my computer and sent a message through a program we have which sends a text and email to all of our fire department members.”

Reynolds’ message: “This is a bad storm, please all hands on deck, get to the fire station now!”

Forty of the Nevada Volunteer Fire Department’s 48 members showed up, and some of the remaining eight, Reynolds noted, were already working at the county or city streets departments. “So, they were busy.”

The first call he made, Reynolds said, “was to Jeremy (Rydl). And the first thing [the Nevada Streets Department] did was start pushing trees out of the road. And that probably changed the events of the day for all of us. A lot of credit goes to Jeremy and his crew.”

Rydl said he called out every city-owned loader, four from Streets and two from Parks and Rec, and gave the instruction to have every loader opening streets and everyone not on a loader out with a saw.

“We started on the main routes first,” Rydl said. “The key was to get one at least lane (on every road) open as quickly as possible.”

Hansen saw just how bad it was when he tried to navigate his way back to the parks and rec offices at Gates Hall. “It was, how do you get there? I had to turn around twice, and you just knew the extent of it at that point was significant.”

Gene Fritz, the cemetery sexton, had already texted Hansen about major tree damage in the cemetery. “He’d already reached out to a tree service.”

Hansen got in his work truck, and he and other parks and rec staff headed out to assess damages. In addition to lots of tree damage in Nevada’s parks and the cemetery, there was a leaning shelter at Hattery Park and damage to the roof of the shelter house in Harrington Park.

Reynolds described the fire department as being “on autopilot” for several days.

“We had 28 calls in 72 hours. Normally in that amount of time, we’d have six calls,” he told the Council. “Out of the 28 calls, four were structure fires, which require a lot of resources.” And more resources were hard to come by because other area fire departments had their own community disasters to handle.

Making things even more difficult, Reynolds told the Council, “we did not plan on our temporary radio system not working, so that was certainly a challenge for about 48 hours.”

Nevada’s Public Safety Department set up a command center at the fire station. They divided their assets into four directions, using Lincoln Highway and Sixth Street as cross points and boundaries. It was actually one of the public safety crews going through one-quarter of town that noticed one of the house fires happening and alerted firefighters.

Much learned through debriefing

In a recent after-the-disaster debriefing for city officials, Reynolds said a number of situations were reviewed. It’s always good for city officials to learn something from every new experience, and the derecho has provided some gut-wrenching, but critical lessons.

One lesson is to consider a fuel reserve for the city. Trying to fuel emergency vehicles when long lines were forming at the gas stations, which were still open, presented a challenge.

Another consideration would be for the fire station to have an emergency generator. “After getting called to our first fire, we had no way of filling our air packs before the second fire. We were not aware we could have that issue,” Reynolds said.

Rydl described the entire storm and days after as a “whirlwind,” but he noted one of the best things he saw from it was how everyone came together. “We don’t have any separate department reports, because we’ve all been working as one – parks, wastewater, water, streets … everybody’s been working together to clean up.”

Rydl also paid tribute to his former employer, the Iowa Department of Transportation. “For 23 years, I was on the giving end of the DOT working with towns (when emergencies arose) … This year, I was on the receiving end, and I’m glad (they were here).”

Most importantly, Rydl thanked everybody in Nevada for “helping us help them.” Community members greeted and worked with city employees as they cleaned up from the storm. Residents also delivered treats and sandwiches day after day to the street department offices to keep workers fed.

“We all came together, and it’s bad that it takes something like this to realize how well we can work together,” Rydl said. “I’m just proud to be a part of it.”

Nevada Mayor Brett Barker commended the work of city staff and residents. “From the day of the disaster on, everyone did a phenomenal job. I want to thank the state too (for the DOT workers and equipment provided to help Nevada).”

“When you drive around now and think about what it looked like two weeks ago… (where we are today) is about the community itself, about teamwork with our leaders and employees, and about neighbor helping neighbor.”