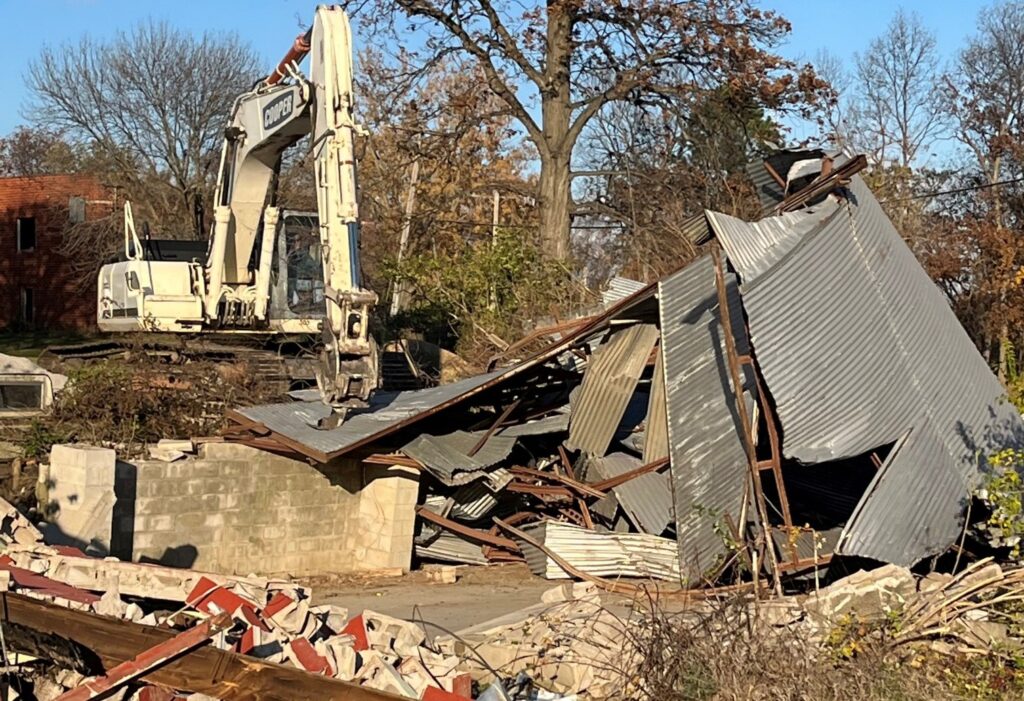 Demolition of old, abandoned buildings started this week at what was once a bustling, unique school setting high on a hill in Nevada, Ia.

Newer residents might not recognize the name, Oak Park Academy, but many residents who have lived in Nevada since before 1980 will remember. Oak Park Academy was a denominational secondary campus for children brought up in the Seventh Day Adventist Church.

Oak Park Academy, which served Seventh Day Adventist children from Iowa and surrounding states, was first established at Stuart, Iowa. It was moved to Nevada in 1911, when growth in attendance required a larger amount of land for all of the school buildings.

If you’ve ever driven along Sixth Street (just north of US Hwy. 30) past Rolling Green Village and McFarland Clinic, chances are you’ve also looked to the east and have seen a driveway, an abandoned church building, a larger building and maybe even some houses in the property which an entrance sign now labels as Oak Park Estates.

The owners of Oak Park Estates, Jason Holland and his father, Randy, purchased the property in May of this year. They not only run a property management business called Prairie Oak Properties, but the two have significant ties to the Oak Park land and its history.

“My parents,” Jason said of his father and mother, Valli, “met there when they were students at Oak Park Academy.” Jason also grew up in one of the houses located clear to the back (east) end of the property. “I have fond memories of living there. It was kind of like living in the country, but with the convenience of living in town.”

The beauty of the property is non-debatable. A walk through the property earlier this week, with the many trees on the property in various stages of fall color, made for breath-taking views. In fact, if you stood in the middle of the property, just east of the parking lot that serves the former dormitory (now apartment building), and looked toward the gym, you could almost sense how vibrant this campus once was.

Hints of what it once was remain. Historic lampposts line a sidewalk, parts of which remain. A small post that held a sundial at one point in time still sits on the grounds. And, on this past Monday, the structures of the gymnasium, the broom factory, the school laundry facility and an abandoned church building still remained. By today, some of those structures were in the process of demolition or had been totally demolished.

Looking to the future

Jason Holland, who talked about the property on Monday, said he is sad to take down some of the structures that hold memories from the past, but it makes sense to do so.

“These structures haven’t been used for 20 years now,” he said.

Demolishing those structures that have become eyesores from lack of use, is a continuation of the work the Hollands are putting in to improve the land as a beautiful place to live. One noticeable recent improvement is new paving on the Academy Circle road that leads to the handful of homes that sit at the southern edge of the property. Those homes once housed the Academy’s faculty.

Holland said they eventually plan to put in new pavement for the parking lot of the apartment building as well.

To help with the high cost, over $150,000, to demolish the old church, gymnasium, broom factory, laundry building and three Quonsets, the Hollands applied for and were awarded funding through the City’s Neighborhood Improvement Incentive Program (NIIP).

At its meeting last week, the Nevada City Council reviewed the Holland’s application and approved funding support of $40,000 through the NIIP, which stipulates how much money can be awarded and that it must go toward projects that “improve neighborhoods, promote the area, and improve the quality of life” in our community.

Holland said demolition of the dilapidated structures is only the first step in the improvements Prairie Oak Properties wants to make at Oak Park Estates.

“We’re working with Availa Bank here in town with loans. They share in the same attitude of wanting to clean up this part of town,” Holland said. “In the future, we’d like to develop the property with a mix of housing, depending on what type of housing is most needed in Nevada.”

He emphasizes, however, that even as they want to give more people an opportunity to experience living in what he considers one of the “prettiest parts of town,” they will develop it in a way that protects the integrity and beauty of the property.

Holland estimated it will take a couple of months to complete all the demolition, and in the spring, they can start from “square one” to decide what is next.

Full page in the 1980 Nevada newspaper as the school closed:

Front page of newspaper from 1961 with story on the OPA laundry business:

Special newspaper section outlining plans for growth of the Academy in 1972: