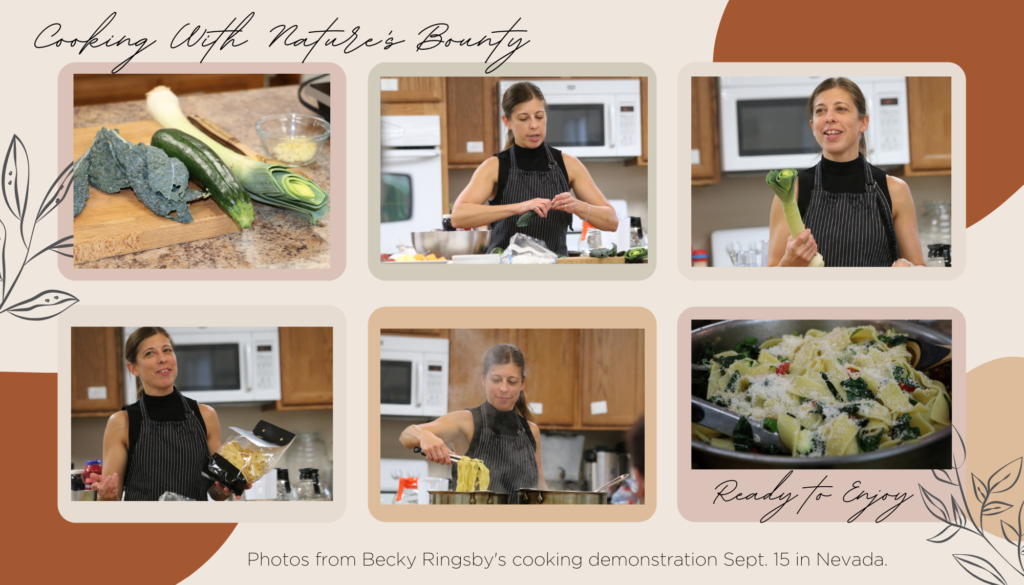 Becky Ringsby of Story City demonstrated how to make “Pasta with Summer Vegetables” and shared tips about working with different fresh vegetables, oils, pasta, and utensils as she did.

The program, which follows the City’s ongoing Healthy Hometown focus, was made possible with a State Earth Bounty Grant.

“Earth’s Bounty in Iowa: Then and Now was a program from the Iowa Center for the Book based on a grant from the National Endowment for the Humanities,” explained Amanda Bellis, assistant library director. “This grant program started with speaker event which we hosted in 2019; at that event, we featured two guest speakers who talked about the state’s history of agriculture and the modern challenges of farming in Iowa.”

This week’s program had been delayed due to the pandemic. “Our goal was to offer another program with ties to farming or agriculture in Iowa, and when we discussed ideas as a library staff we liked the idea of focusing on homegrown or locally-grown foods,” Bellis said. “One of our staff members had attended Becky Ringsby’s cooking classes in the past and suggested reaching out to her. Becky’s program used a lot of farmer’s market produce from local farms, and many of the ingredients are foods that people can grow in their own gardens.”

Ringsby has done a number of cooking demonstrations locally. A licensed culinary instructor, she has given demos at Wheatsfield and Cook’s Emporium in Ames, The Olive Tap in Ankeny, the Ames Farmers’ Market, Backcountry Winery in Stratford, the Iowa Arboretum in Madrid, and Prairie Meadows in Altoona. She has also done private classes. “What I love about cooking is the teaching aspect of it,” said Ringsby, who is passionate about the integrity of homemade food, prepared healthfully, using real ingredients.

Cooking is a journey, Ringsby described. “You just try it … you learn from it.”

This time of year is a favorite for her. “I love to cook seasonally… When it’s asparagus season – it’s all about asparagus at my house.”

When she cooks, Ringsby likes to focus on flavor, but she also taps into another of our senses – sight. “You eat with your eyes first,” she said. So bringing in a variety of colors to any dish is important. And she certainly had colorful ingredients – like cherry tomatoes in various colors — prepped for the pasta dish.

Here are a few of the tips Ringsby mentioned as she prepared the pasta dish:

In a large skillet, heat 2 T olive oil over medium heat until shimmering. Add zucchini and yellow squash (in the demonstration, kale was also added to the zucchini and squash) and sauté until browned and just crisp-tender. Remove from skillet and set aside. Wipe out skillet.

In a large saucepan of well-salted boiling water, cook pasta about two minutes shy of al dente (Italian for “to the teeth” – pasta cooked long enough that it is neither crunchy nor too soft).

Scoop up a bit of pasta water and add to skillet with aromatics and deglaze pan (or use a splash of white wine!) Using tongs, transfer pasta directly from the pasta water into the skillet and add half cup pasta water; cook over medium heat, tossing frequently, until the water is absorbed. Sprinkle Pecorino or Parmesan a little at a time in an even layer, as well as additional pasta water half a cup at a time, tossing in between additions, until the pasta is al dente and a sauce is created. Do not overcook pasta.

Remove the pan from the heat and add the butter, tossing until melted. Add the lemon zest and lemon juice, reserved zucchini, and yellow squash, cherry tomatoes, and basil leaves; gently toss until combined. Taste for seasoning, adding additional salt and pepper as needed. Serve topped with extra grated Pecorino or Parmesan; sprinkle with a coarse sea salt, such as Maldon. Enjoy!

*Ringsby also shared ways to alter this recipe for each season of the year, and she shared recipes for hummus, Tzatziki, and orange yogurt fruit sauce as side dishes for fresh fruits and vegetables. Reach out to the library if you’d like copies of these recipes.