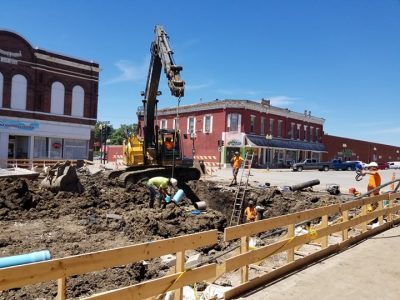 What happened this week?

— Shawn Cole, building and zoning administrator, said the most exciting thing that happened this week was the completion of all utility work in Block 3 (K-Lincolnway).

— Also, being finished today is the sidewalk bump-out work in Block 1 (I to J).

What will happen next week?

— By mid-week, Cole said, Sixth Street from I to the northernmost driveway should reopen, while the remaining part of that block remains closed to be a mobilization area for workers.

— The biggest item that starts next week is ConStruct prepping Blocks 2 (J to K) and 3 for paving.

“They’ll have about a foot of dirt to truck out of the entire area,” Cole said. “Then they will bring a disc in and disc the dirt up. After it dries awhile, they will compact the dirt back down.” This process will go on for the next two weeks, he estimated.

By mid-July, he said, they’ll be ready for a proof roll. “Then, they’ll place the rock and pave those two blocks.”

Other notes from this week:

–Over half the utility connection work is now complete: Cole said that boring into the buildings to bring in utilities has taken about a day per building. With that work completed in Blocks 1, 2 and 3, over half of the utility boring is done for the entire project.

In the future stages of the project, “we probably have only 10-12 buildings left for boring on the side streets and from Lincolnway to M,” he said.