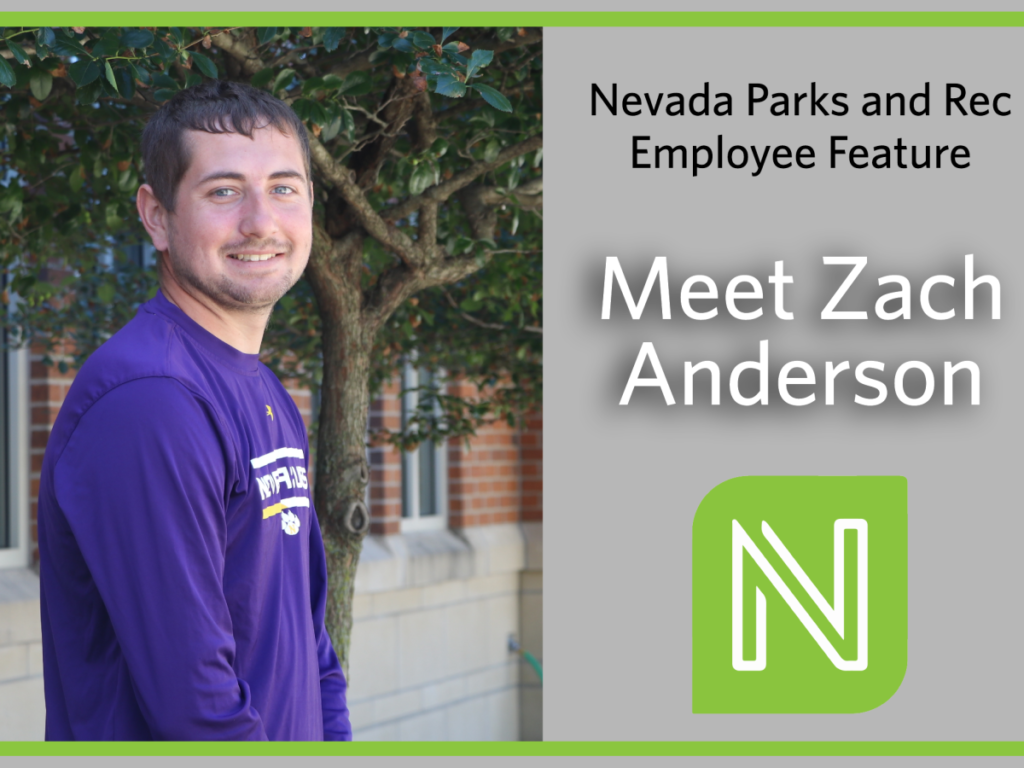 Nevada’s newest parks and recreation employee is a familiar face for Nevada.

Zach Anderson, 25, was raised here and graduated from Nevada High School in 2013.

He is happy to be back in Nevada and working for the city. It was a goal of his, he noted, to someday work for Nevada Parks and Recreation. It would likely make his late grandfather, Ron Anderson, proud. Ron was once the mayor of Nevada (1986-1990).

“I worked [for parks and rec] for three summers part-time, and I just fell in love with this type of work. I always liked the sports programs that parks and rec provided us and figured when I was older, I could keep on doing that for the generation below,” he said.

After graduating from Nevada High School, Zach attended Marshalltown Community College for two years, then transferred to the University of Northern Iowa in Cedar Falls.

He graduated from UNI in 2017 with a degree in leisure youth and human services.
Following his college graduation, Zach said, “I took a couple of jobs that weren’t in my field … just waiting for something [in his field] to open up.” He worked for Martin Brothers Distribution in Cedar Falls and for a landscaping company there too.

Finally, a job in parks and rec opened in Nevada, Zach applied and was pleased to be hired. He started work in Nevada in the first week of April as an equipment operator.

Now that baseball and softball games and tournaments are allowed, Zach said he’s busy helping get the SCORE fields ready for each event. His best day on the job so far, he said, “was the first time I worked on the new high school baseball field. It’s a really nice facility.”

Zach played several sports while growing up in Nevada – basketball, football, soccer, and baseball. “I wish I’d have been able to play on the new field,” he said.

Nevertheless, he enjoyed his time playing sports, especially during high school and will be among those who can share stories of Billy Sunday Field with future generations.

“I miss high school sports. I loved playing with my friends, spending summers and winters in the gym, and just being around my friends.”

At work, Zach spends most of his time with two younger Nevada High School graduates, Sam Abraham and Jack Cahill, who are seasonal workers for Nevada Parks and Rec. He also works a lot with Joe Mousel, building and grounds maintenance coordinator.

Zach is glad to be back in the Nevada area, where he is near his family and many friends. Both his parents, Doug Anderson and Nadine Anderson, live in Nevada. Zach’s younger sister, Megan, graduated from Allen College for nursing and was hired by Iowa Methodist Medical Center in Des Moines.

Zach lives in Ames at this time with his fiancé, Raegan Saunders, a 2015 graduate of Nevada High School, who graduated this year from UNI with her master’s degree in accounting. Raegan has started working for John Deere.

Looking to the future, Zach said he and Raegan plan for a September 2021 wedding. He hopes they will eventually settle in Nevada, and that he can work his way up at Nevada Parks and Rec. “Ultimately, I’d love to do more of the office work. A lot of my schooling was in that,” he said about working on recreational programming.

Zach would also love to find himself doing youth or school-age coaching at some point too. “I would love to start working with little kids in baseball and basketball and work my way up to high school-level coaching.”