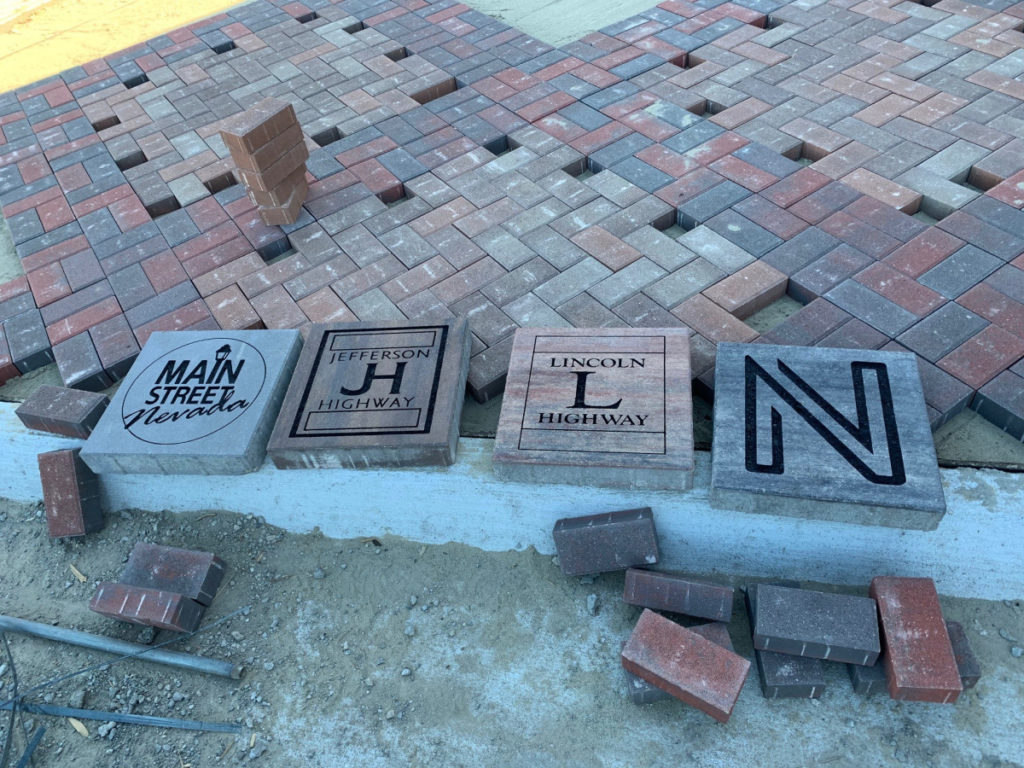 Four etched bricks, representing the City of Nevada, Main Street Nevada, and the Lincoln and Jefferson historic highways, will be placed in each new bump-out of the downtown area.

Shawn Cole, Building and Zoning Administrator for the City of Nevada, said there are around 20 bump-outs in the downtown project. The bump-outs, which bring pedestrians to the traveled portion of the street before they cross it, will be filled with bricks. Each bump-out will feature the four bigger etched blocks.

“I want to thank Nevada Monument for being ‘johnny on the spot’ during this project,” Cole said, noting that the business, owned by Joe and Tamara Ackerman of Nevada, has done an incredible job of working on a schedule with this project.

Cole said nearly 80 etched bricks would likely be ready for placement by spring 2021. In the meantime, place holder bricks will be put in the bump-outs as they are finished.

Corbin, who loves history, spoke for a moment about the significance of the two highway etchings. “The two highways, Lincoln and Jefferson, brought travelers and industry to the community, which helped drive the growth of business and created a thriving and bustling community center.”

He continued, “Not only are the highways still used, but they have also become tourist destinations. Each year, thousands of Americans set out on trips and journeys to drive the scenic, historic byways.”

With the Lincoln and Jefferson highways being prevalent travel destinations, their signage has become identifiable to tourists who travel them. “By having [the highway logos] prominently displayed in the downtown district, we become a destination for these travelers,” Corbin said.

In considering the significance of the etched bricks, Nevada Mayor Brett Barker said it goes back to an ongoing desire to develop a community theme.

“When I was new to the city council, Mayor Jerry Gull used to talk about Nevada’s need to develop an identity or theme. In the past year or two, we have made a conscious effort to build on Nevada’s tradition celebrating the Lincoln Highway. Nevada is the only community in the country with a festival celebrating it.”

Historians in the community advocated for the city hall campus naming to recognize that both the historic Lincoln and Jefferson highways converged in Nevada.

The highways, Barker said, “became a natural and organic theme for our downtown district. Installing these pavers will tie in with the signage that already exists in the Lincoln-Jefferson Highways Heritage Park and along the Lincoln Highway corridor.”

By placing the etched symbols for the highways, the City and Main Street Nevada at “the gateways of our downtown,” Barker said, “it’s the perfect way to recognize and celebrate our community’s history…. and set our downtown up for success in the future.”