Enjoy a race and/or a concert this Sunday 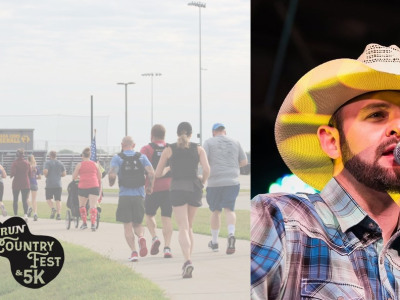 The third race of the Runners United Nevada (RUN) 2020 series will occur this Sunday afternoon.

Originally scheduled for May, the RUN Country Fest & 5K had to be postponed due to concerns about COVID. Another change was the cancellation of headliner and country singing star Bryan White.

“We were disappointed to postpone Bryan White into 2021,” said RUN organizer Dane Nealson. But one reason to postpone and have White come next year is to hopefully ensure more people can see him “given the amount we invested to bring him here.”

To have the country concert this year meant looking for star power a little closer to home. RUN couldn’t be more pleased to be featuring hometown country singer Neil Hewitt and openers Chris Patterson and Spencer Braly of the Great Caesar’s Goat.

The concert – being held in the Billy Sunday Field area, just west of the Story County Fairgrounds — will start at 2:15, following the 1 p.m. race.

“We still wanted to have a show for people to come to after so many things being cancelled and closed down this year, as well as having something for our race participants to enjoy,” Nealson said. He believes having the concert outdoors in an area with plenty of room for people to spread out is a safe and responsible way to bring entertainment to Nevada.

For runners, there is still time to register for the Run Country Fest & 5K. Race registration is $30, and the deadline is 5 p.m. this Friday. There are no race-day registrations—runners will check-in at the Billy Sunday Field area between noon and 12:45.

This is the third race of the season for RUN (following the June Freedom Run and the Lincoln Highway Dash in August). Nealson said the group has changed its runs in several ways during COVID. “One was establishing contact-free packet pickup prior to the race. Requiring participants to register ahead of time and not allowing race-day registration has worked well logistically,” he noted.

Also new, RUN has started its races in waves based on age and gender. “This has helped with social distancing,” he said, “and in general, our participants have been extremely good about social distancing prior to and following the races.”

It’s also worth mentioning that COVID hasn’t diminished the successful turnout of Nevada’s races this year. “Frankly, with COVID cancelling so many things, I think more people have been looking for something to do, which has helped us. The Freedom Run had record turnout and the Lincoln Highway Dash had its strongest turnout in several years,” Nealson reported. He’s also seen more involvement this year by students who run cross country and track.

Nealson is also thankful to Burke for changing the course of these races. “Burke’s contribution as our presenting series sponsor allowed us to significantly upgrade our appearance with the inflatable arch at the finish line. Our sponsors have allowed us the ability to give all participants tons of swag – medals for each race, a T-shirt for each race and a quarter zip for all series participants. All of this gives a much more professional feel to our races.” The last race of the season comes up later this month — the 2nd Annual Evergreen Lane History Hustle and Chili Cook Off on Oct. 25.

Earlier this week, Nealson was still hoping to find a few more course volunteers for Sunday – these are people to help make sure runners stay on the course. “A few more people helping is always nice,” he said.

RUN is still finalizing a date to bring Bryan White to town next year, as it plans to continue this series of races into the future. “We established ourselves as a 501(C)3 last year to be able to create continuity financially. We operated on a budget of over $20,000 this year thanks to our generous sponsors and race participants.”

Profits the runs bring in are donated to four charitable organizations in Nevada — the American Legion, Main Street Nevada, the Nevada Foundation, and the Nevada Community Historical Society.

And, the group is always looking to expand on what it’s doing. “We are already discussing major improvements and exciting additions to next year’s race series,” Nealson said.
As for this Sunday, with a forecast of no rain and highs in the mid-50s, it’s “perfect running weather,” Nealson noted. He hopes it’s also a great day for everyone to join the runners around 2:15 for music. Throw on a jacket or grab a lawn chair and blanket and head to Billy Sunday Field.